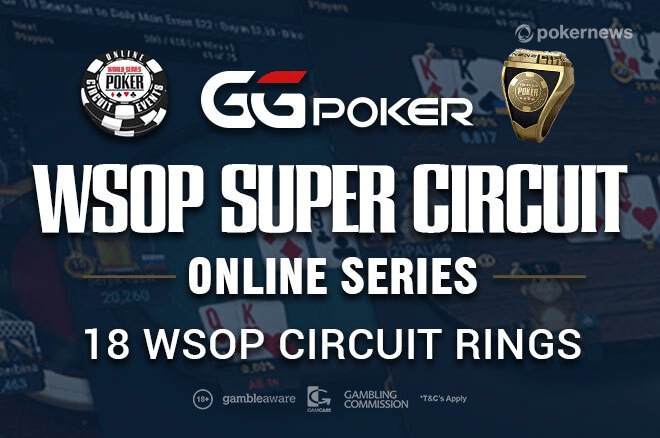 The final few event winners in the WSOP Super Circuit Online Series have been crowned, including the winner of the 9,779-player Main Event.

However there were also titles to hand out in the PLO Main Event, Monster Stack and The Closer, and PokerNews were on hand with Head to the WSOP Online Super Circuit Live Reporting Hub[/CTA]coverage of all three events.

"rubbherducky" came into the final table as one of the chip leaders and continued to roll over the field with some aggressive play. They managed to wake up with big hands at the right time on route to recording the final four eliminations. Coming into heads-up play, "rubbherducky" held a commanding 10 to 1 chip lead and wasted little time before finishing off his opponent. In the last hand of the day with all of the chips in the middle preflop, both players flopped multiple straight draws. The turn and river bricked out which left "rubbherducky"'s pair of eights out front.

The day kicked off at 3 pm EST with 305 players returning to the online felt. They already reached the money on the previous day with a total of 2,627 entries into the event. The pot-limit Omaha variance brought plenty of action as it usually does which meant a quick finish for many of the notable names. Laurynas Levinskas, Rui Ferreira, Kahle Burns, Isaac Baron, George Wolff, Ludovic Geilich, Sergi Reixach, and Mike Watson were some of the familiar names to hit the showers early on.

After just a couple of hours, less than 100 players were left fighting for the title. Andras Nemeth, Fedor Holz, and Joao Vieira were some more of the casualties within the next hour. Holz started off the day as one of the chip leaders but found himself on one of the short stacks mid-way through the day. With all of the chips in the middle already, Holz rivered a king-high flush only to have his opponent make an ace-high flush which ended his day.

Leading up to the final table, multiple players took turns sharing the chip lead but it was the eventual winner "rubbherducky" who led at the start of the final table. It didn't take long for "LemonRanger" to be the first to hit the rail when his pocket kings were cracked by a queen-high flush from "jellopy77". Just moments later, "rubbherducky" started his string of eliminations en route to being the champion.

"QuarantinPlaya" was the first victim after his pocket queens were out-flopped. "rubbherducky" flopped a straight and a flush draw and held on to bring the field down to just four players. Keeping up with his aggressive style, "rubbherducky" raised nearly every pot, chipping away at his opponent's stacks.

"RunItOncePls" finally picked up three connected cards with one suit and decided to go with it. However, "rubbherducky" woke up with aces in the small blind and held on to eliminate "RunItOncePls" in fourth place. "jellopy77" was sitting comfortably in second place throughout the final table but was also getting short as time went on. He found himself at risk with pocket kings and even a turned set of kings wasn't enough to save him. "rubbherducky" turned a straight and the board would not pair up on the river.

That left "rubbherducky" and "Love2Spew" to battle heads-up but it wasn't much of a contest. Some small pots went back and forth in the early going but in the first all-in, "rubbherducky" ended the tournament.

How to Become a Professional Poker Player

"waransan", from Germany, has emerged victorious in Event #15: Monster Stack $500K GTD of the 2020 GGPoker WSOP Online Super Circuit after a three-way deal with "DameDolla" and"geladinhaRLS". He collected $92,866 and a Circuit ring for his victory.

This one-day tournament drew a massive field of 5.216 players creating a prize pool of $959,744, almost double the initial $500,000 guarantee. With 15-minute levels throughout most of the tournament, the action was fast-paced and once the bubble burst at Level 26, players started hitting the rail even faster.

"waransan" flew under the radar for most of the day and it wasn't until the final two tables were reached that he began emerging as a threat to his opponents. He was responsible of the elimination of "ALaGrandeLePuseCuca" in thirteenth place with ace-queen against "ALaGrandeLePuseCuca"'s eights in an all in preflop situation to climb to the top of the leaderboard and he found himself taking a seat at the final table with the second biggest stack a couple of levels later. Between making the right plays, and getting the right cards at the right time, he maneuvered his way to four-handed, with the chip lead. "waransan" briefly lost the lead three-handed but he won a three-way all in shortly after to start a heads-up match against "DameDolla" as a favorite.

The heads-up battle only lasted a couple of hands until "DameDolla" called an all in raise on the flop with an ace-high flush draw against "waransan" who had mid-pair. "DameDolla" couldn't hit and "waransan" was crowned the winner.

"potamophobia" was the first casualty of the final table. He shoved his final crumbs with king-eights and got called by "HowdyTeeexas" who held sevens. The board was of no help to him and he settled for ninth place.

He was followed to the rail by "MisterPro" after he moved all in with sevens and saw a call by "waransan" who had ace-ten. The flop brough a ten ending "MisterPro"'s run in eighth place.

"Iaolalo"'s tournament life ended in sixth place after he got his aces cracked by "HowdyTeeexas"'s queens.

"HowdyTeeexas" followed him to the exit shortly after when he jammed ten-nine suited into "DameDolla"'s kings.

Next in line, was "icho" in fourth place. He needed to find a spot to double up and moved all in with pocket deuces only to find himself in bad shape against "geldinhaRLS"'s pocket nines.

While "geladinhaRLS" put up a good fight three-handed, he lost multiple pots in a row and his run ended in a three-way all in with ten-nine suited against "DameDolla"'s ace-ten and "waransan"'s kings.

The heads-up match began with "waransan" holding a 3:1 lead and it was all over when "DameDolla" flopped an ace-high flush draw against "waransan"'s mid-pair and couldn't hit. "DameDolla" settled for the runner-up title and "waransan" was crowned the winner.

Sporting the Mexican flag, “Goblue” was spotted as one of the top stacks with about five tables remaining and stayed toward the top of the leaderboard until the end.

Once play reached the final one hundred players on the day, it seemed to accelerate with the turbo structure of eight minutes level, creating a surge in eliminations. It took just 40 minutes for the final three tables to be played down to the final table.

At the final table, eliminations happened steadily every few minutes to create a conclusion in under an hour of play. Most of the critical hands at the final table were preflop all ins that resulted in a shift of chips, depending on who got the best of the board run outs. “AndyAtTheBike” entered the final table as chip leader but was sent out in fourth place, following some lost coin flips. In third place was “YallaHabibi” who bowed out to create the heads up matchup.

“Pokerguy21” of Canada had the 57/43 chip lead at the start of heads up play over “Goblue”. But after a few hands “Goblue” took the lead and was able to finish it off in five minutes as they rode pocket kings to victory on the final hand.

That wraps up the PokerNews coverage of the GGpoker WSOPC series. Thank you for following throughout all the ring event action.

Master These Three GGPoker Features to Improve Your Online Game