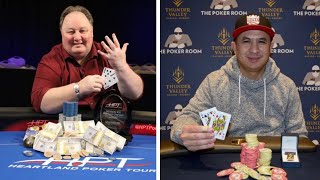 J. C. Tran (Justin Cuong Van Tran) was born on January 20, 1977 in Vietnam. Tran is the youngest in his large family with eight older brothers and sisters. When J.C. was only two years old his family moved to Sacramento, California. After finishing High School, Tran studied Business Management Information Systems at the California State University in Sacramento. Here he picked up poker and has been crazy about the game ever since.

He started with the home games and then went on playing the $9-$18 game at Capitol Casino in Sacramento. His first big live tournament performance came in 2004 at the World Poker Tour World Poker Finals where he finished 5th and collected $354,000 cash prize. Another big money finish was at the 2005 WSOP where Tran again scored 5th in a $2,000 No-Limit Hold’em event and cashed $118,000. The same year he played two more final tables in major poker tournaments and collected $200,000 cash prize for 7th place at the WPT Borgata Poker Open and a $252,000 prize at the $10K WSOP Circuit event at Bally’s Las Vegas.

As of September 2010, Tran's live tournament cashes exceed to over $8 Million with 28 WSOP cashes worth a total of $1.6 Million. However, J.C. Tran is known not only for his live tournament achievements, he's got some big online winnings in his pocket as well. He's the winner of the biggest online poker tournament – 2006 PokerStars WCOOP Man Event, $2,500 No-Limit Hold'em. Along with the WCOOP title Tran collected the $670,000 first place cash prize.

Among his big tournament finishes, J. C. Tran also has some personal awards in his collection – in 2005 Tran was named the World Poker Tour Season 5 Player of the Year.