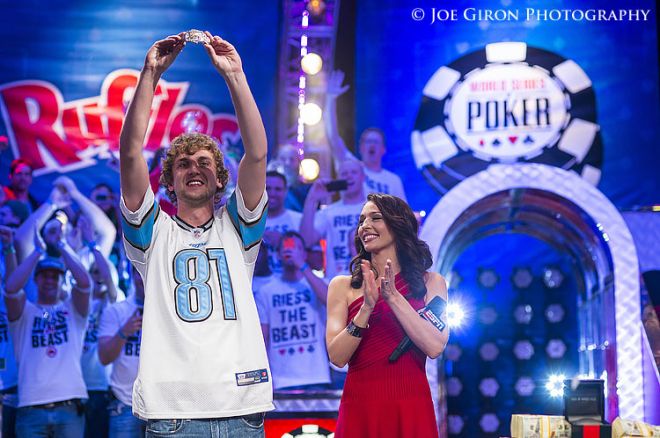 On Tuesday, Nov. 5, Ryan Riess defeated Jay Farber heads up in the 2013 World Series of Poker Main Event, earning $8,361,570, the platinum bracelet valued at $500,000, and poker immortality. The 23-year-old Michigan native is the 45th world champion in WSOP history.

"I've been dreaming about this for a long time," Riess said after the win. "Ever since I was 14 and saw [Chris] Moneymaker win it. I just had a great feeling about it."

Entering the final table, all eyes were on chip leader JC Tran. He came into the final table with a large gap separating him and second place, but Tran's run ended in fifth place. You can read the complete recap of the first day of the final table here, but for now the lights are all shining on the Michigan kid.

When heads-up play began, Farber had the chip lead by roughly 20 million over Riess. Quickly, though, Riess powered his way to the front with expert play and timely maneuvers. Every big pot seemed to be pushed the way of Riess, although there was one double up for Farber that extended play a bit.

On that double up, Farber took his straight draw up against Riess' top pair in a clash on the flop. Spiking the straight on the turn gave Farber some extra life, but Riess didn't waver. He sat right back down and went back to work. The next thing everyone knew, Farber was short once again.

On the final hand, Hand #261 of the final table, Farber was all in with the

. While Riess had a powerful hand in the confrontation, Farber had two very live cards and a solid chance at doubling up once again.

flop, Farber was looking for a five to stay alive. His queen would now give Riess a Broadway straight, and that would've spelled the end. The turn was the

, leaving just one more card for Riess to dodge.

paired the board on the river, and the swarming began. Riess' rail stormed the stage, engulfing the new champion and piling on top of him. Chants of "Riess the beast!" rang loud throughout the Penn & Teller Theater, but Riess made sure to fight his way out of the pack and congratulate Farber on a job well done.

Overcome with joy, Riess hugged his railbirds one by one, grabbing his close family members a little tighter than the others, but nonetheless showing emotion with each person individually. He came into the final table believing he was the best player remaining, and he can now rightfully call himself world champion.

Riess is unsure of his future, but when asked about being poker's next ambassador, he broke out into a smile.

The 2013 champ isn't sure how much of the $8.3 million top prize will go into his bank roll, or if he'll be playing in super high roller events.

As for some of the hate Riess received on Twitter from professional poker players about the way he played, he wasn't very concerned.

"There's going to be people like Scott Seiver who say I suck," Riess said. "I obviously don't care."

Back in July, 6,352 hopefuls took their seats in the 2013 WSOP Main Event, all vying for the richest prize in poker history. Among them were champions from the past, poker legends, dream chasers, and grinders from all over. It was then that Riess was just another young face in the field, but things would all change slowly over the course of the next seven grueling days of poker. Following Day 7, Riess was one of the famed November Nine, taking the fifth-largest stack into November. Eight more eliminations later and Riess was the last man standing.

Congratulations to Ryan Riess, the champion of the 2013 World Series of Poker Main Event!

To relive every hand of the Main Event final table, be sure to check out the PokerNews Live Reporting Blog.