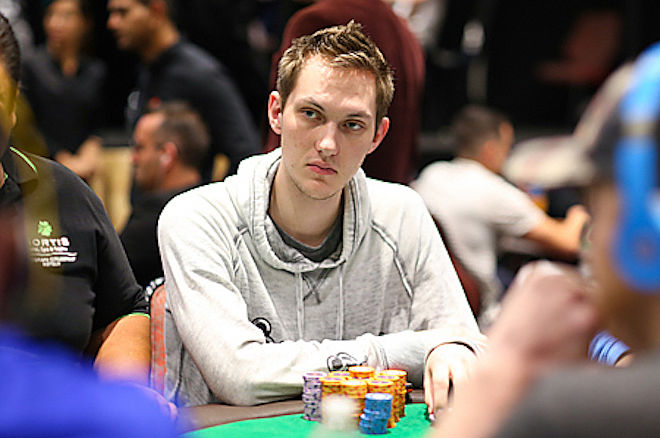 Last year Hunter Cichy told PokerNews about "The Template," an algorithm that he uses when consciously considering pertinent factors at the table. “I can adapt within that algorithm,” he explained, “but the same concepts run through my head over and over. Structuring my thought process prevents me from distraction.”

Cichy, a Florida-based poker pro, coach and founder of Check Shove Poker, recently expanded his thoughts on The Template into a new book. We caught up with him to get the details.

PokerNews: Why did you decide to write Advanced Concepts in No-Limit Hold'em? How is the book structured?

Hunter Cichy: It was never my intention to write a poker book. I've just been taking meticulous notes on everything poker-related since I was 12 years old. If I didn't understand something — pot odds, pot equity, fold equity, minimum defense frequency, implied odds, etc. — I would read poker books, watch training videos and listen to podcasts until I found the information I needed.

After doing this for years, I had hundreds of pages of notes and they really came in handy when I started coaching small stakes cash game players. I would coach them for an hour over Skype and record the entire session using Ecamm Call Recorder, then send the HD video to them and email them a study guide with .pdf attachments of all the notes I had taken on the topics we'd discussed.

It turned out to be an extremely effective system because it gave my students multiple ways to process and retain new information. If a player didn't fully comprehend a concept after the session, he could watch the recording, read several pages of my notes and click on links to many useful materials that could be found scattered across the web. This helped to establish trust with my students because I was honest enough to suggest materials from other poker coaches in order to provide a different perspective on the topic.

One of the first things my publisher Byron Jacobs (D&B Poker) said was how much he appreciated the logical structure of the book. He loved how it started with very simple math concepts, slowly combined them into intermediate concepts and extrapolated from that information to discuss the more advanced concepts later on. He also liked the heavy emphasis I placed on solid preflop fundamentals before discussing many hand history examples to tie all the information together.

You rely heavily on PokerSnowie, an artificial intelligence program that specializes in balanced or “game theory optimal” play. What can you tell us about the default preflop ranges that Snowie advises?

Snowie assumes that your opponents are playing perfectly. It suggests opening ranges that are much tighter than what you'll see in real life. These ranges are great for situations where you feel outmatched because they prevent tough competition from punishing you for playing too loose. For all other situations, it's good to know how much wider than optimal your range is against weak opponents. It keeps you from getting too far out of line.

You often remind readers that while the book is intended to show what GTO play looks like, it's equally important to determine when and how opponents deviate from GTO play. Can you mention a few exploitative adjustments that appear in the book?

The most common exploitative preflop adjustment I suggest is using a larger opening size from all positions in live cash games. Snowie has determined that the optimal approach at the 100 big blind stack depth is to min-raise from UTG through cutoff and to raise 3.5x from the button. This is great for online play, but when you're facing much weaker, fundamentally unsound live players, you should assume they're flatting too much and not three-betting enough until proven otherwise.

The easiest way to exploit players that flat too much is to open 3-4x with a slightly tighter range from UTG through cutoff and a slightly wider range from the button. The easiest way to exploit players who don't three-bet enough is to really polarize your four-betting range or completely remove four-bet bluffs if needed, and fold a little more than the bottom third of your opening range.

Similarly, you should three-bet larger against players who defend too liberally, and you should aggressively fold to four-bets from players who don't polarize their ranges. The whole idea is to inflate the size of the pot preflop artificially — to magnify your equity and playability advantage against weak ranges — so you can win bigger pots on later streets. Conversely, you should seek to cut your losses early in the hand against tight three-betting and four-betting ranges.

How about postflop? What exploitative adjustments do you make there?

The most common exploitative postflop adjustment I suggest is continuation betting at a higher frequency on dry flops. There are many situations where Villain should be defending with every pair, ace-high, gutshot draws and two overcards with a backdoor flush draw. While online players are keenly aware of this, amateur live players aren't defending anywhere close to that frequency. As a result, you can fold out a lot of their equity early in the hand by c-betting at a higher frequency.

Closely related, you would be shocked how often Snowie overbets as a bluff when stacks are deep. I suggest overbetting at an even higher frequency against risk-averse players, especially if they're taking a shot at a bigger game, or they have a backer, or they've never gone so deep in a tournament before. Many reputable studies have shown that humans react twice as strongly to losses than they do to gains of a similar amount. Thus, I constantly remind my students that as uncomfortable as they feel exploitatively overbetting as a bluff, their opponents feel even more uncomfortable calling off for stacks with one pair.

Most hand examples assume 100-big blind stacks. How can the book help players improve their short-stacked or deep-stacked game? Do you think that PokerSnowie will eventually craft GTO ranges for 200BB+ poker?

Although I would have loved to include hand histories with non-standard stack depths, that simply wasn't possible within the scope of this book. The reason most of the hand histories assume 100 big blind stacks is because the default preflop ranges listed earlier in the book would change quite a bit if stacks were much shorter or much deeper.

The goal was to take optimal 3.5x opening ranges and defense ranges, carry them forward postflop and show how that translates into range-versus-range analysis using the math framework I spent so much time outlining. I wouldn't have been able to do that with a high degree of accuracy if there were any argument over what the optimal preflop ranges should look like because of stack depth. Thus, I had to make all the starting stacks uniform at 100 big blinds.

The good news is that after reading the book and spending some time off the table, you'll be able to take this process and use it to enter hand histories manually into PokerSnowie Pro using any stack depth up to 400 big blinds. Then you'll be able to see the range breakdowns and expected value of any decision excluding hand histories with straddles or antes. I've been having email conversations with the PokerSnowie developers for the last year or so and I'm convinced that the artificial intelligence they've put together is reliable at all stack depths.

The book will also come with a premium training video package that walks readers through essential math, as well as preflop and postflop play. What should prospective readers know about the video series?

The premium coaching package contains three training videos that are each over an hour long. The footage is designed to mirror and complement much of the information presented in the book. The first video covers crucial poker math concepts, the second video discusses optimal preflop ranges at the 100 big blind stack depth, and the third video is a detailed hand history review that ties it all together. I spent roughly 36 hours putting all of this footage together and, I assure you, it's the highest quality content I've ever created.

Who is your ideal reader/target audience?

The short answer is that this book will be beneficial to anyone who plays no-limit hold'em. If you're a beginner looking to learn the fundamentals, the book includes optimal preflop ranges that are of utmost importance to you. If you're an intermediate player struggling with poker math, the book explains these concepts in a way that anyone can understand. And if you're an advanced player grinding $5/$10 NL or bigger, the book discusses range-versus-range analysis in a way that I'm sure you've never seen before.

So it's difficult to define who my ideal reader is because I've written a book that every poker player should read and probably come back to multiple times. Basically, it's the book I wish I had when I started playing poker professionally seven years ago.

When will the book be released?

Advanced Concepts in No Limit Hold'em: A Modern Approach to Poker Analysis will be released June 1 and the paperback is already available for pre-order at dandbpoker.com. If you prefer Kindle, it's also available for pre-order on Amazon without the premium training video package. Lastly, D&B is planning a launch party at the Rio just as the World Series of Poker is getting started. They don't have all the details finalized, yet but you can subscribe to my email list at checkshovepoker.com to stay updated.