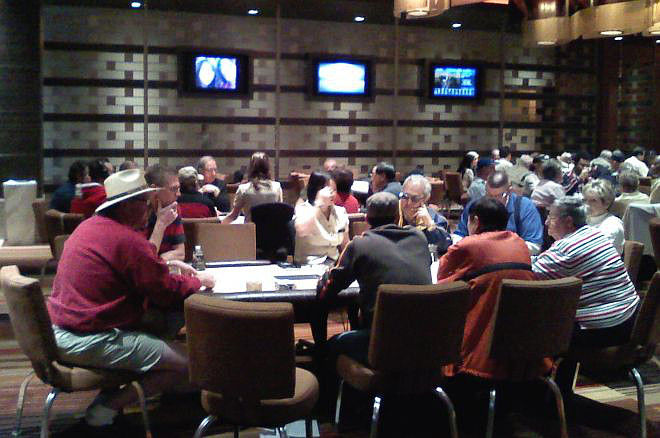 Limit hold'em. There, I said it, and the world didn't fall apart.

I know that among a certain subset of the poker community, it's quite fashionable to treat fixed-limit hold'em as something like a polyester suit — it was fine a generation ago, but now is part of the past.

Is it just because you can't shove all in? Because you have to earn your money one pot at a time rather than in a couple of massive double-ups? Because you basically always have to play four streets of poker?

And there's this thing about profit — sometimes it's fun to make money at poker without working hard at it. That brings me to my story.

I was at a casino recently and thought I'd sit down and play a little poker. Wander into the poker room and they've got a game going.

I sat down and built up my five perfect stacks of $1 chips. Unlike no-limit, with all its mixing and matching of colors, a good limit game has exactly one color chip in action. Everything's easier. But I digress.

Folks, as I watched and played this game, I realized I was seeing something that I hadn't seen in years — the most honest, transparent game of poker imaginable. They all limped in so they could hit a flop. If you raised, they called, because they wanted to see the flop. After that, they checked and called if they thought they weren't drawing dead. If they bet, my goodness, they were beating top-top and you simply had to evaluate your chances against a Very Good Hand.

A check-raise promised at least two pair. It was never

on a king-high board, it was never a draw — it was the goods.

Furthermore, the average pot I played was far bigger than the average pot that I play in a $1/$2 no-limit game. That's because I'd raise after a handful of limpers, they'd all call, and we'd be off to the races.

And race it was, because when you make it $6 to go with

after three limpers and they all call, you have to drag your kings through a minefield. But I'll tell you what — they stand up way more than their share of the time, and when they do, you drag a two-scoop pot.

And if you hit a Real Hand, with two (or three or four) people all calling a couple of big bets on the turn and river ("I have to call — look at the size of the pot"), then you've got a three-scooper and it's as big as any pot you see every 45-60 minutes in a $1/$2 no-limit game.

I'm telling you, sometimes it's fun to play poker without the giant peaks and valleys of unlimited betting. You just bang your bets out there when you have the best hand and hope it holds. You call when you have the right price to draw, which is almost always.

And friends, you pay attention when they bet, and don't play head games with yourself. Because I promise you that in that game, and ones like it, when they bet or raise, they mean exactly what they're saying, and in fact, it's usually an understatement.

Your no-limit instincts will generally keep you in good shape when playing limit hold'em, as long as you remember pot odds. That specifically means:

One of the beauties of poker is the variety of forms and fashions it offers. If you can play limit hold'em, sometimes you'll have the opportunity to make good money playing a fun game against transparent, honest, but eminently fun and enjoyable opponents. Our game is rarely better than that.

NB: With the Spring Championship of Online Poker coming up at PokerStars, you'll have ample opportunity to flex your limit hold'em muscles. Your SCOOP opponents won't be as honest or transparent as my friends at this small casino, but many of the same principles apply — and you might find you really enjoy the game.

Lee Jones first joined PokerStars in 2003 and has been involved in the professional poker world for over 30 years. You can read his occasional Twitter-bites at @leehjones.

Five Adjustments to Make When You're Playing Limit Hold'em