One of my favorite poker stories is how in 2000 Jennifer Harman won a World Series of Poker event in $5,000 No-Limit Deuce-to-Seven Draw the first time she ever played that particular variant. She received just a few minutes of coaching from Howard Lederer on basic strategy before the tournament began, and that was enough to propel her to her first bracelet.

Of course, if you took an average Joe off the street who had never played poker, or only dabbled in it occasionally, you could not expect to get the same result. The whole point of the story is that poker skills are highly transferable. Harman’s hard-won acumen at many other poker variants is what really earned her the title; Lederer’s coaching was just a bit of fine-tuning.

I was thinking about that story again because of recently being in a situation where I was playing a bunch of poker variants that I had never even heard of before, let alone played. I was visiting family out west and joined in a home game. It was graciously put together by one of the hosts of the Top Pair poker podcast, who happened to live in the area.

The game’s host for the night has a set of cards on which are found the details of about 80 different forms of poker. The group uses a spreadsheet chart and randomizer function to pick which one they’ll play next. With their permission, I took this snapshot of the game wheel just before it was electronically “spun” (complete with roulette wheel sound effect): 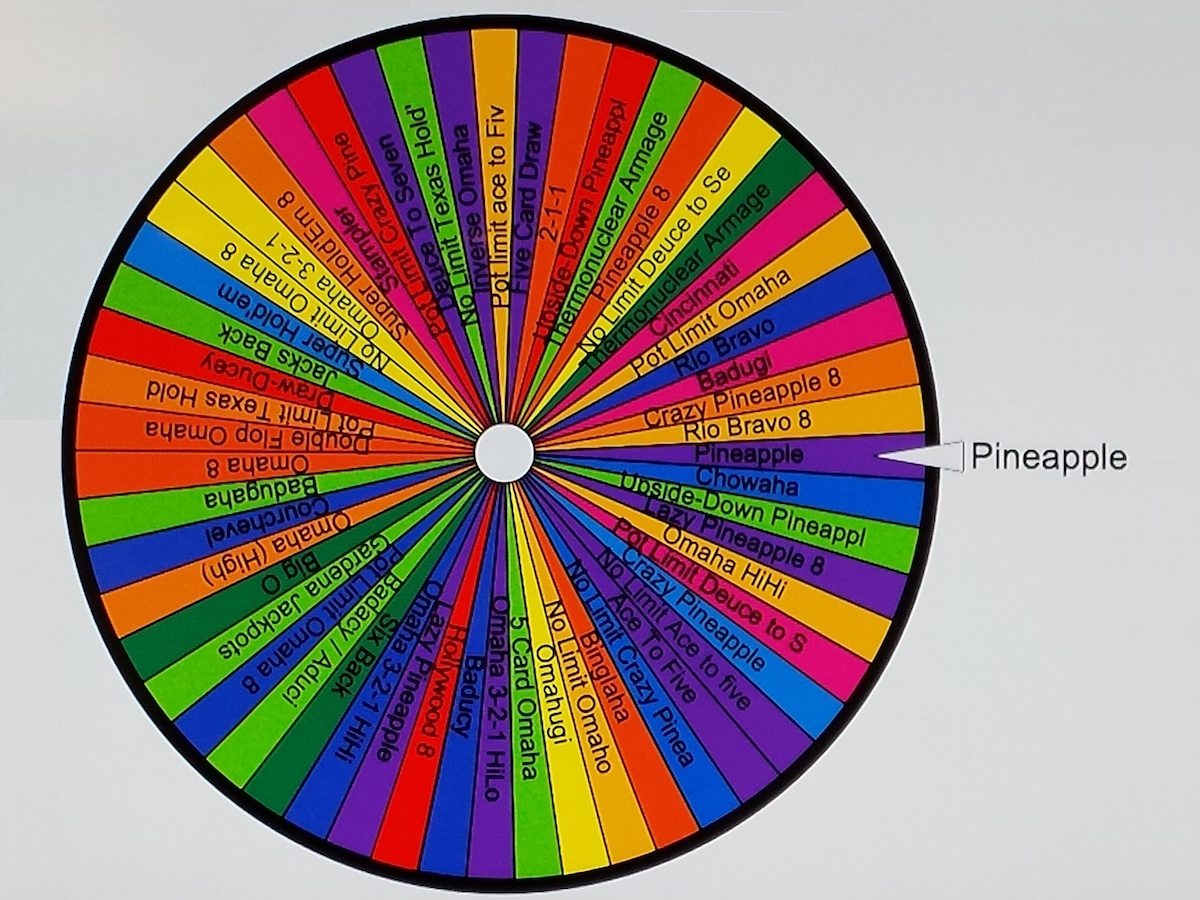 All 80 games were in the original wheel, making their labels too tiny to read. This one shows “only” 55 different games, because about 25 had been taken out of contention by the fact that we had just played a stud-type game, and to avoid repetition, all of those became ineligible for the next round of play. (There’s an option for the wheel to select or deselect “Draw,” “Stud,” and “Flop” games as groups.)

There was a time when the prospect of playing for real money in poker variants that I had never tried — or even heard of — would have been too scary to consider. That isn’t the case anymore. In fact, I now consider it one of the most fun ways one can spend a poker night. Moreover, I have good enough general poker instincts that I don’t worry about losing my shirt.

Thinking about how this transformation had occurred led me to postulate four steps for success at unfamiliar poker variations.

If you’re familiar with only hold’em, expanding your repertoire to include these other games introduces you to four principles not found in hold’em:

It’s probably better to focus on learning one game at a time, if you can, rather than plunging into H.O.R.S.E. from only a hold’em background. Four new games at once is daunting, and may lead to confusion rather than insight and confidence.

Once you’ve learned the rules and some basic strategy in the H.O.R.S.E. games, move on to another limit game — deuce-to-seven triple draw.

I remember the first time I played in a 10-game mix after becoming reasonably familiar with all of the H.O.R.S.E. components, and feeling completely lost when the draw games came up. Like most newbies to draw, I could not reliably keep track of when we were in a round of betting and when we were in a round of drawing, nor could I remember how many draws had been completed in the current hand.

Such confusion led to lots of embarrassing mistakes. There is no substitute for just getting a whole bunch of hands behind you so that it becomes as much second nature as hold’em probably is now.

Next learn how to play Badugi, a game that also uses the triple-draw structure, so that won’t be new after the previous step. It also rewards having the lowest hand, which by this point will be familiar from the Omaha hi-low, razz, and stud hi-low rounds of H.O.R.S.E.

What will be new here is playing with a four-card final hand, something that might be disconcerting to first-timers. Also new is learning the importance of drawing to a “rainbow” hand (four different suits).

What level of proficiency in these seven games do you need? Nothing grandiose, but you should be able to:

The reason that a solid foundation in these seven games is essential to success in the crazier world of obscure poker variants is that nearly everything you’ll encounter is based on one of those seven, or somehow combines features of each.

Crazy Pineapple, for example, is like hold’em, but with three down cards, one of which is discarded after the flop. Razzdugi is played like 2-7 triple draw, but splits the pot between the best Badugi hand and the best razz hand. If you’ve never played either of them before, your brain will explode when you try to figure out sound strategy on the fly. Nobody wants to see that happen.

Even with a decent grounding in the seven games I’m recommending, wild home-game poker variants can cause your brain to spin out of control in other ways.

First, they can mess up your dependence on determining the nuts and working down from there. That’s how most of us play most poker games — you ask yourself where your holding sits in the range of the best possible hands. If it’s way up there, you go for it with gusto, and if you can name dozens of other hands that could beat yours, you dump it.

But some games don’t allow this basic tactic. In my recent outing, we played one game called Cincinnati. You’re dealt four hole cards, and one community card is placed on the board, followed by a round of betting. Then there’s another board card, more betting, repeated through a total of four community cards, which can be used in any combination with your private cards.

That means that any player could have any hand strength, up to and including a straight flush, from the get-go. Stripped of any theoretical limit on how good an opponent’s hand might be, you’re reduced to estimating how probable a given strength of hand is mathematically, along with your ability to read strength and weakness in opponents’ body language. It’s a challenge.

Second, some variants allow you to combine cards in so many ways that determining the nuts is daunting. One of the Vegas casinos used to host a weekly mixed game, one part of which was the devilishly tricky 3-2-1 Omaha. The final board had three flops, two turn cards, and one river, meaning that each player could choose from six possible virtual boards with which to combine two cards from his hand. Mentally running through all possible combinations sometimes seemed almost beyond human capability.

It was similar last week when I first played something called Criss-Cross Omaha, which I firmly believe was invented by mad scientists.

Two full sets of five community cards are dealt out as in regular Omaha, and a player can use three cards from either one, plus two from his hand, for both high and low. Additionally, however, one could use any of the five vertical columns of two cards formed by the boards (e.g., both river cards), combined with any three hole cards, to make a high and/or low. Again, the number of possible combinations is enormous. In turn, of course, this means that the winning hand will be the nuts or near-nuts a very high fraction of the time.

Home games with crazy poker variations can be a lot of fun. Even better, you can make some decent money while having a good time. But you will neither make money nor have fun if you feel like you’re floundering with no idea what’s going on.

Learn the seven games on which most variants are based — the H.O.R.S.E. games, deuce-to-seven triple draw, and Badugi — and pay attention to poker basics like careful starting hand selection and people-reading skills. It may not be enough to make you the first WSOP champion in Gardena Jackpots or Rio Bravo 8, but it could be enough to make you a home game hero.