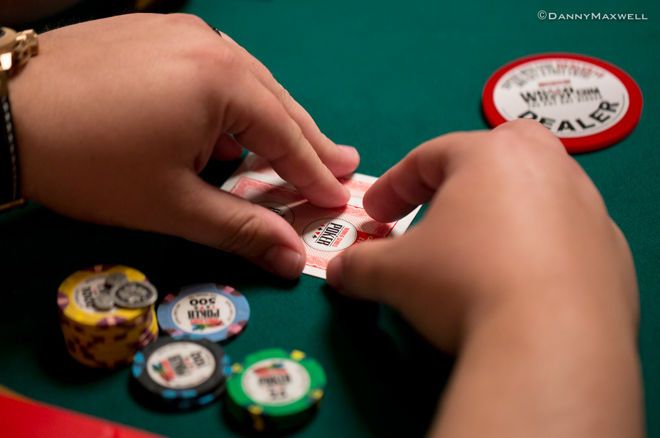 This hand came in a $10,000 buy-in six-handed no-limit hold'em tournament I played at the World Series of Poker, a tournament from which I going to be discussing a few different hands over the coming weeks.

Often when playing deep-stacked like this, I like to open a little larger, especially from the button. The big blind, a loose-aggressive young player with almost 50,000 to start, called my raise, and the flop came

As I discuss in the video below, here's a situation where I have to ask myself if I'm willing to bet with everything. Hands you want check back here would include those you're willing to call down with and/or junky hands. So checking back with a decent queen (plus the spade) makes sense in this spot. Meanwhile I'd want to bet hands with an eight, my best made hands, and some of my draws.

After I checked, the turn brought the

and my opponent bet 2,000, a pretty big bet (about 80 percent pot). I know I want to call here, but should I raise? It's kind of player-dependent. I might raise a weaker opponent, but in this $10K event there aren't many of those, so I called.

and my opponent fired another two-thirds pot bet of 4,650. Now what should I do? Take a look below and listen to my reasoning, and see what I did decide:

In this spot after flopping top pair, do you normally blast your stack or do you play it slow?