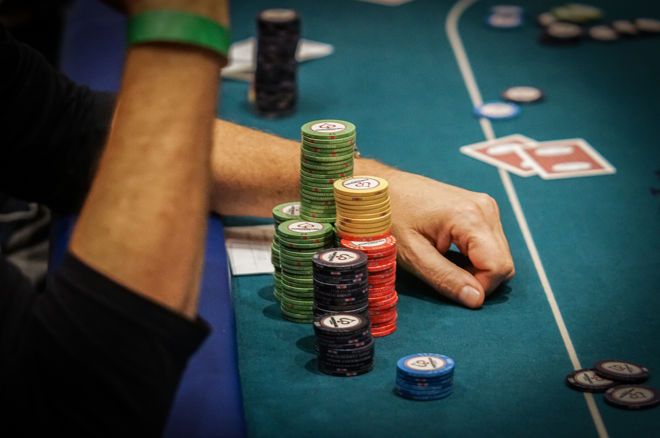 Here's an interesting tournament hand in which I start out flopping a set, yet thanks to a monotone board I am not too excited initially about building a big pot. Then on the turn I improve to a full house, at which point I want to try to get more chips in the middle.

Interestingly, though, my opponent kept leading with small bets on every postflop street, which made my decisions a little less straightforward than they might have been otherwise.

on the button and with about 95,000 in my stack I elected to call. As I talk about in the video below, either calling or reraising is fine here, with my decision usually affected by the playing styles of those in the blinds.

, meaning I had made bottom set although I wasn't crazy about all of those spades, and with almost 3,500 in the middle my opponent led for 1,000. This is actually a tough spot, since just calling here gives my opponent great odds to see the turn with a potential spade draw, but raising opens me up to being reraised, thus making things even more uncomfortable for me.

I just called, then the turn happily brought the

to give me a full house. Again my opponent led with a small bet, betting 1,500 into almost 5,500. Now I had to decide whether just to call or to raise, knowing if I raised I might lose some river value.

I'll stop there and let you see what I decided to do both on the turn and the river, and listen to my thought process as I worked out what to do.

On the river, we have the effective nuts. How much would you have raised on the river?