Hand Review: Getting 90 Big Blinds in With Pocket Tens 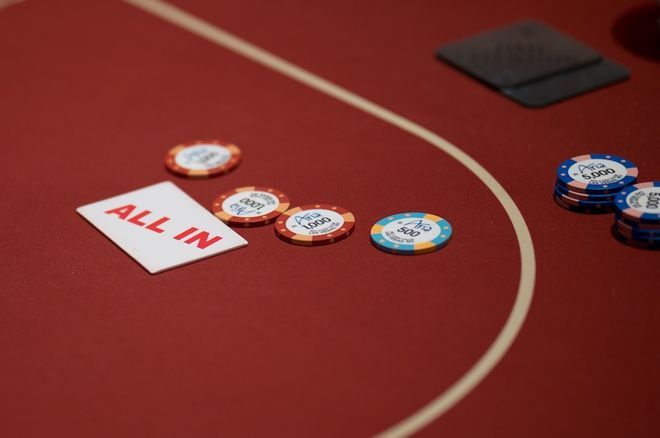 When I last fired contributions to our strategy section, I went on a bit of a departure from my normal beat and talked about some general thoughts after my ring win at World Series of Poker Circuit Hammond in a couple of articles — Part One & Part Two. Today, we'll go back to the norm and look at a hand from an event that ended a little less successfully for me.

Also at Hammond, I played the $1,125 No-Limit Hold'em event a couple of days later and found myself seated with Tim McReynolds, a player from my home casino who pushes the action like few others. The style has brought him his share of successes with three WSOP-C ring wins.

For this hand, I had pumped up my starting stack of 25,000 to around 45,000 at 250/500/75. The third player in this pot was one I had pegged as a little on the weaker, tighter side. He'd splashed around a bit, but never shown significant aggression.

The aforementioned weak-tight player opened to 1,200 from under the gun. I called with

in middle position and action folded to McReynolds on the button where he made it 4,000. The opener called, and I moved all in for about 45,000. McReynolds called my shove, and the opener finally let it go.

In a lot of ways, accepted poker tournament play has become quite a bit nittier over the years. People are absolutely loathe to punt off a decent amount of chips with anything but the nuts or at least nut blockers that they can point to as a defense in case anyone questions their play.

However, I think there's still a lot of value to be had in certain spots that might end up looking punty on occasion, and this was one of them.

While playing GTO is all fine and dandy, I think it's important to adjust to your opponents in live poker and this was a spot where I did just that.

McReynolds brings a unique dynamic to the table because of his high level of aggression and some of the hands he'll do it with. I've seen him execute some truly wild plays, getting in piles of big blinds with suited-gappers and firing in huge squeeze-shoves with stuff like

. Once the other players start to get a handle on how he's playing, the whole table will start adjusting and you start seeing hands like this one.

When facing squeeze-happy opponents, it's a good idea to flat raises with some strong hands occasionally to try to induce. Now, tens is a hand I'd likely flat anyway in this spot against an under-the-gun opener, but in general, it's something to keep in mind.

Once McReynolds goes for the squeeze here, the most important thing is what the opener decides to do. If he jams, I'd be in an ugly spot and probably would have been forced to let the hand go. If he folds, jamming becomes a little too crazy for me as I'd be risking too much to win too little.

When he flats, it sets up kind of an ideal situation. He's very unlikely to slow play nutted hands here and let it go three ways versus at least one wide range. There's about 10,000 in the pot and I have around 40,000 in my stack, so shoving is very reasonable for even my nutted hands. Four-betting to some smaller amount just leaves very awkward postflop play when I'm out of position against my most likely opponent.

Of course, getting in 90 big blinds preflop with pocket tens isn't exactly textbook. In fact, a lot of people would just shake their heads and tell you that's a dumb punt, and it definitely could have easily ended that way if McReynolds turned over

. However, plugging in a pretty tight calling range for McReynolds into a calculator has tens around 44 percent, so the hand does fine at showdown without even taking into account the times I add 10,000 to my stack for free.

Luckily for me, things worked out as I won a huge early race. Unfortunately, the good times didn't last long and I wound up failing to cash, but this hand stuck with me as a fun, risky early gamble that helped me build a big stack.