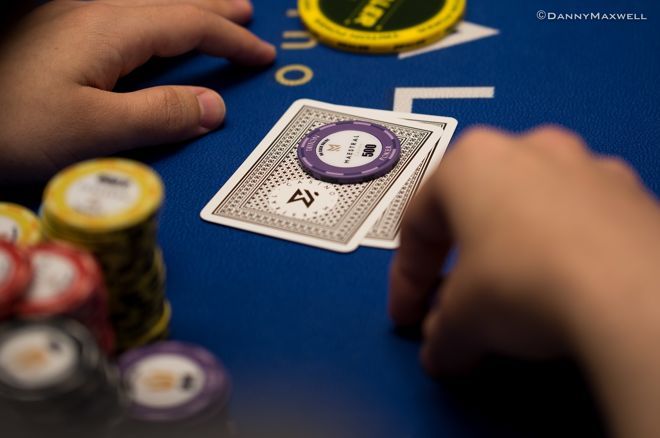 A weak flush draw can do a lot of damage in a heads-up confrontation — when you play it aggressively, when you attack a weak range, or when you are confident it is drawing against a made hand.

But when a flop is seen by more and more opponents, the likelihood that a stronger flush draw is present, seeing it with you, increases. Thus it is essential in multi-way pots to play weak flush draws cautiously — that is, to keep the pot small if you can, and even to get out of the way and fold if you must.

Here's an online hand of six-handed NL200 ($1/$2) that shows a player being too aggressive with a weak flush draw in a multi-way spot.

Four to the Flop

This hand began with a raise to $5.84 from middle position, called by the button and both blinds. With a little less than 12 big blinds in the middle, the four players saw the flop come

. Action checked around to the button.

At that point, three players have shown weakness on a flop that certainly could be more coordinated. The initial raiser, if he holds an underpair to the king, or high cards that did not connect, would and should be reticent to continuation bet into a field of three opponents. He is likely to be called in at least one spot and the range that calls will almost always have him beat. There should be no expectation, therefore, that he has checked in order to call. A probing bet will find that out.

Does the button have hands that contain a king? Yes, of course. The button also has in his range sets of eights and fives. Who should win this pot now if not for him?

This is all to say that betting the flop was a wise choice by the player on the button. However, the size of the button's bet is what we should puzzle over, for he bet $32 into a pot of just over $23.

Sometimes we bet and thin the field so that it is just us, looking around, while the pot heads our way. But when we thin the field and still have company, our opponents are probably in the thick of it — where "it" is their ranges' stronger hands.

Betting as an action can strengthen opponents' continuing ranges, but size plays into this function as well. Theoretically, the larger one bets, the stronger the range that will continue after this bet.

And so, after the button bet $32, it should appear quite strong that the middle position player (the original raiser), having seen both blinds fold, decided to raise this flop big to $103.54 (almost 52 big blinds), leaving himself about $151 behind.

Too much strength has been shown here to continue with a low equity hand. Thus when the button responded by moving all over the top, he should expect to be called with great regularity.

The button made his all-in shove with

for a ten-high flush draw. Perhaps he felt there was no other course of action available to him. The initial raiser called and showed

for the nut flush draw, finding himself in a dominant position.

Once the cards were turned up, the middle position player with

found himself exactly a 4-to-1 favourite. With

the button would have had better equity against top pair, of course, but also against a set of fives (just a 3-to-1 dog).

What then, should the button have done? Three mistakes were made here, the first of which is typical — calling before the flop. Having the button does not entitle one to play just any hand in a vacuum. And while T-6-suited is not "any hand," it is not any good, either.

The button's second mistake was not the act of betting on the flop, but rather the size of his bet. He could have accomplished the same for half the price.

Finally, and perhaps the most expensive mistake, was pitting his weak flush draw against a hand strong enough to make a big check-raise versus an overbet on a flop that was seen four ways.

We know that starting hand requirements go down as play gets short-handed, and that they go up as more players are dealt in.

Let's say two players see a turn heads-up. It matters if the flop had been four ways or three ways, because the continuing requirements were different leading up to this point. Some players understand this for one stage of a hand, but fail to apply it to another.

We see the solution for the button here is that, after facing a check-raise, he should simply fold. His flush draw is weak, a dog against any made hand, but also against the nut flush draw. And when all the money goes in, the nut flush draw is one of the least likely hands to be dissuaded from sticking around.

The domination a weak flush draw suffers from in a situation such as this runs in the reverse for the nut flush draw. It can never be dominated, and its equity is the same against any set. That is not true of other made hands — for instance, bottom set is practically drawing dead against oversets.

That is a roundabout way of saying that the button was not "unlucky" to see his opponent turn up the hand that had the button in the worst shape here. (He was, however, very lucky with regard to how the board ran out — see below.)

The premise we began with, that it is possible to fold a weak flush draw postflop if the heat get too hot, absolutely applies in this case. Try to apply the logic to less unusual cases as well.