It Gets Better: The Story of a Not-So-Succesful WSOP Debut 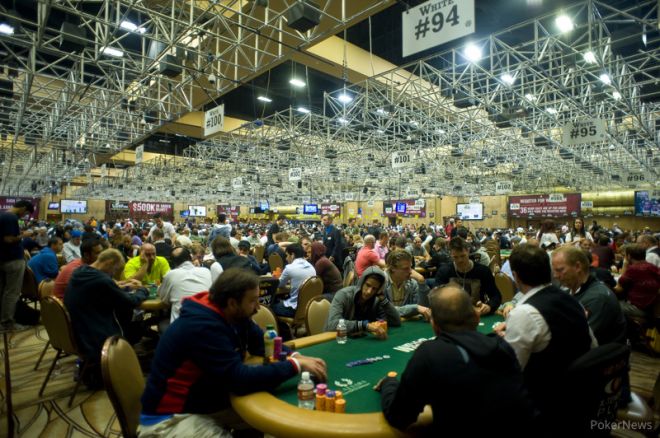 I’m departing from my usual subject matter to address players who might be participating in their first World Series of Poker tournament this summer.

Perhaps oddly, I’m going to advise that you not read the rest of this article — at least not yet — because I’m going to write about WSOP failure, and I don’t think it’s helpful to prepare to fail.

But the sad reality is that most players will fail in most tournaments, and especially in their first WSOP, and so I’d like to talk to you about dealing with that if it happens. So bookmark this spot, then stop reading after this sentence; come back to read it if you run into a worst-case scenario, and need some help processing your feelings about it.

Okay, now it’s just us WSOP losers talking — those who got lucky enough to make the money in their first big tournament won’t be back to read this.

Yes, I said “us” losers. Let me establish my bona fides as one of you. In 2009, I won a freeroll tournament for poker bloggers, and with it, entry to a $1500 no-limit hold’em WSOP event. I spent weeks building myself up mentally for my first big tournament, then crashed and burned in spectacular fashion. How spectacular? I was out in 20 minutes, having played exactly three hands. Can you beat that for the “worst performance” award?

If I had gotten my chips in with the best of it and taken a bad beat, I could have lived with that. But no. I lost it all running a bluff that didn’t work. Now, I could argue that my opponent logically should have folded — he had just one pair, as I had correctly surmised, and should have read me for better than what he had. But that just means I misread my opponent as one who wouldn’t risk all his chips on one pair. In short, I tried to bluff the wrong guy. My bad.

Here’s how I described my feelings afterward in my blog:

I’ve spent much of the last several hours going over it in my mind again and again and again. I’m trying to figure out just where on the stupid scale it rates, between “mildly” and “outrageously.”

Most of the disappointment comes from not having played the way I had intended to play, and therefore feeling that I blew it in the most obvious and avoidable way. I had even thought explicitly in advance about how I didn’t want to be ousted. I had decided that the worst way would be to make a hero call that turned out to be a donkey call, and the second worst would be to try running an outrageous all-in bluff that blew up in my face.

I can’t shake the feeling that I just plain suck at poker.

The most damning way of looking at it, and the one that most occupies my thoughts, is approximately this: “You proved beyond a shadow of a doubt that you are the phony wannabe good-for-nothing moron donkey idiot that deep down you’ve always known yourself to be.”

I feel profoundly embarrassed, even while remaining uncertain to what degree I have reason to be. I have never come so close to an uncontrollable reaction that would leave onlookers saying, “Hey, there’s no crying in poker!”

(If for some reason you want to read that whole pathetic, self-indulgent dirge, you can here: “Did anybody get the license plate of the truck that hit me?”)

Maybe some of that resonates with you right now. If so, I have some assorted thoughts to share with you.

1. Nobody died. Nobody even went to the hospital. If you think about it for a bit, you can probably name a bunch of things objectively worse than this that have happened to you in the past, and yet here you are. Life goes on.

3. Those people will give you comfort if you let them. So let them.

4. No matter how awful you feel now, it will pass. You won’t be feeling this low for the rest of your life. You won’t even be feeling this way in a week. In as little as 24 hours, it will be at least a little bit less painful. At some point, sooner or later, you’ll even want to play poker again.

5. You presumably plunked down your money for a WSOP event only when you had developed enough poker skill that you felt you had a reasonable shot at doing well. After kicking yourself for a while for not living up to your potential when the time came to shine, your judgment that you’re up to the challenge will return. Hard as it may be to believe right now, you will even get back to the same kind of urge to test yourself in the crucible of the WSOP that led you here in the first place. In short, you’ll be back.

6. The good news is that when you do gird up your loins again to take another crack at the biggest stage poker has to offer, you’ll be even better prepared for it than you were this time. Now you know where things are. You know how to get registered and seated. You’re done being overwhelmed by the size of the room and the number of players you have to compete against. You have a sense of the pacing of the game. And whatever you did wrong to make you feel as crummy as you do today, well, that’s one mistake you know you won’t make again. If your loss in your first WSOP was as shameful as mine was, you can take comfort in the knowledge that you can’t possibly do any worse on your second go-around — it can only get better!

All of this will give you a leg up on the other people who are there for the first time — and on the many, many players who do not learn from their past mistakes.

Did all of that happen for me? Yeah, it did. I’ve been back to the WSOP for several more tournaments, including a Main Event. And though I still haven’t made the money in one, I also have never played as embarrassingly badly as I did that first time.

As the saying goes, “It gets better.” It really does.