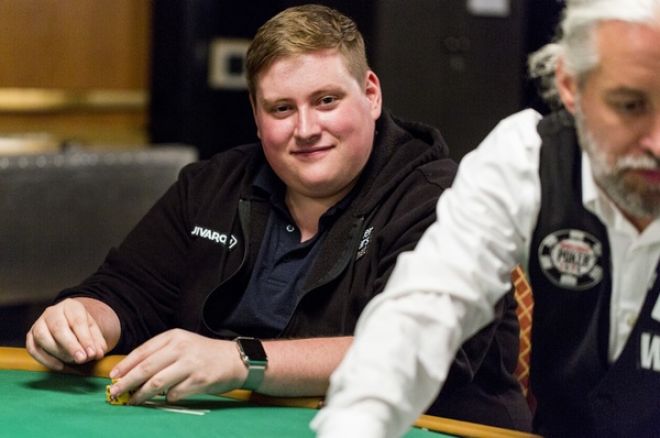 I recently had a chance to sit down with online poker pro Jaime Staples to discuss a variety of topics, including how players can improve generally with an emphasis on the mental game.

After launching what has become a thriving Twitch channel just over a year ago, Staples was signed on in April as a Friend of Pokerstars. Prior to getting into poker, Staples was an accomplished golfer who once considered a career as a professional. As he described to us, he has been able to take some of the lessons he learned on the course and apply them to poker.

PokerNews: What got you into poker generally and Twitch specifically?

Jaime Staples: I started playing poker because of a brotherly rivalry! My brother Matt had more chips than me on a play money app and I couldn't let that fly. I started doing some research into the strategy of the game to try and get better. Once I found out people play poker for a living, I fell in love with the game.

I found Twitch last year after hearing about it on a poker forum. I liked the idea of streaming my play as it looked fun and I thought it would help me to stay focused. I started October 25, 2014.

Watching players like yourself on Twitch can be very educational. What would you say is the best way for a beginner to improve at poker?

I think the fastest way would be to learn directly via Twitch, videos, books, coaching, study tools, pen/paper/calculator... but that’s not very fun with never playing. I think being realistic, beginners should strive to spend 5-10% of their “poker time” studying or learning about the game. If it’s not fun, I think there is a much higher likelihood a beginner gives up. So mostly play, and do some study. That study percentage should ramp up over time. Enjoying it almost all the time I think is really important.

What would say is the best way for an intermediate player to improve?

The same way as a beginner. You have to continue to up your percentage of study time. Your goal is to have a stronger theoretical understanding than those who you are playing against.

What's the best piece of advice you ever received — in poker or in life — and how do you apply it to what you are doing now?

It took me four years of half-hearted post-secondary education to gain the confidence to follow my dreams. It was hard to take the leap of faith, but I figured out that the failure to try was the only failure there was.

I feel as if I have always been pressured by my family and society to take the safe route and that my self-worth would be defined by how successful I turned out. When I look to the greatest at almost anything in the world, they did the exact opposite. They went for it. I derive inspiration from a few people including Kevin Smith [the director], Gary Vaynerchuk [the entrepreneur and investor], and Steve Jobs [the businessman and co-founder of Apple]. Their ideas changed me and allowed me to approach my poker and streaming business with a lack of fear. [Ed. note: links from names go to videos featuring each.]

How important is the mental game to poker and does its importance change as you move up?

I think it is essential! If I had to assign a reason for why people fail in poker, I say nine times out of ten it’s due to mental leaks. Bankroll management failure specifically usually stems not from misunderstanding the concept, but from implementing it incorrectly. This to me is mental. It’s important to note I am referring to success as profit here. That doesn’t mean profit is the goal in poker, but it’s the one in which my mindset comes from.

What are the most important aspects of the mental game in your opinion?

For me, I think the most important aspect is separating results from decisions. Results-oriented thinking dominates the way we live in almost all situations. It’s the way we learn! Evolutionarily speaking, it was an advantage to learn from our mistakes so we could not be in danger the next time we faced the same situation.

Unfortunately poker often goes against that idea and we need to keep pulling the trigger even in the face of negative feedback (like bad beats). The reward far outweighs the punishment in most circumstances, so we have to be fearless in the face risk and remain positive when things don't go well.

This is really hard to figure out. In the beginning of my poker life, bad beats would get to me but I slowly learned to measure my successes by the decisions I was making, not how well the board ran out. Poker is a lot more interesting that way.

Are there any specific strategies you use to improve your mental game?

There hasn’t been a specific thing. It has all been about learning about the subject and I did a lot of that [before] as a junior golfer striving to go pro. After continuing to revisit core principles, a Zen-like state eventually took over while I play poker.

What goals do you have for the next year or two — both in poker and with Twitch?

I don’t have anything concrete. I kind of like living in the gray area where all I know is I want to keep climbing but I can’t see the peak of the mountain. It almost becomes too realistic with an end in sight. I want to be the very best broadcaster I can and grow my Twitch channel to be as big as it can. And not just in terms of people reached, but also in depth of connection with my community. That is equally important to me.

Thanks to Jaime Staples for taking the time, and be sure to visit his Twitch stream at twitch.tv/pokerstaples.

Dr. Tricia Cardner is the author of Positive Poker with Jonathan Little, available in paperback, audio, and e-book formats via D&B Poker as well as through the PokerNews Book Section. She also co-hosts The Mindset Advantage Podcast with Elliot Roe, available for free on iTunes. For more from Dr. Cardner, visit her website and follow her on Twitter @DrTriciaCardner.