Within a few chips, here's how the two remaining gentlemen stack up going into the final duel:

We're not sure of the betting, but Gus Hansen was all in holding

flop and behind the

two pair of Phil Ivey. Hansen rolled his eyes when he seen his predicament, and his cause wasn't helped by the

turn as Ivey made a boat.

"The Great Dane" needed a king on the river to stay alive, but it was not meant to be as the

appeared. Hansen was eliminated in third place, worth $800,000, while Ivey moved up to the #2 spot on the all-time money list.

Daniel Negreanu is Our Bubble Boy

Patrik Antonius raised to 100,000 from the button and after Gus Hansen folded his small blind, Daniel Negreanu announced that he was all in for around 750,000. Antonius snap-called and Negreanu knew he was in trouble.

Negreanu had run into a big pocket pair, and the severity of the situation was not lost on him. He was in desperate need of an ace, but the

lacked a bullet. The

turn was also a blank, and the

river made Negreanu the bubble boy.

"Never had a hand for, like, the last hour and a half," Negreanu said before making a quick exit from the tournament area. We are now three handed with each player guaranteed at least $800,000.

Ivey Gets That Shovey Feeling

From the button, Phil Ivey opened to 100,000, and the action came to Gus Hansen in the big blind. He stacked out a three-bet to 300,000, then added a single gray chip to the stack to make it 301,000 total. Ivey spent a couple minutes in the tank, then four-bet shoved over the top with the covering stack.

That sent Hansen awfully deep into the tank, and it would be a good four or five long minutes before he acted. All the while, he was mumbling to himself and scrunching his face up, trying to sort out what was what. At one point, he even turned around to grab a bottle of water and take a leisurely sip, enough to get Ivey a little shifty in his chair.

The fold came, though, and Hansen has dropped back under a million chips.

The Crown staff, who seem just as exhausted as the camera men, have graciously brought the remaining four players breakfast. So as not to slow the action, the players' meals were delivered table side and they will eat as they play.

Nothing like a nice breakfast during an $800,000 bubble at five in the morning.

Gus Hansen was under the gun and opened for 136,000, which Patrik Antonius called from the big blind. Both players proceeded to check the

flop, as well as the

turn. Antonius then checked the 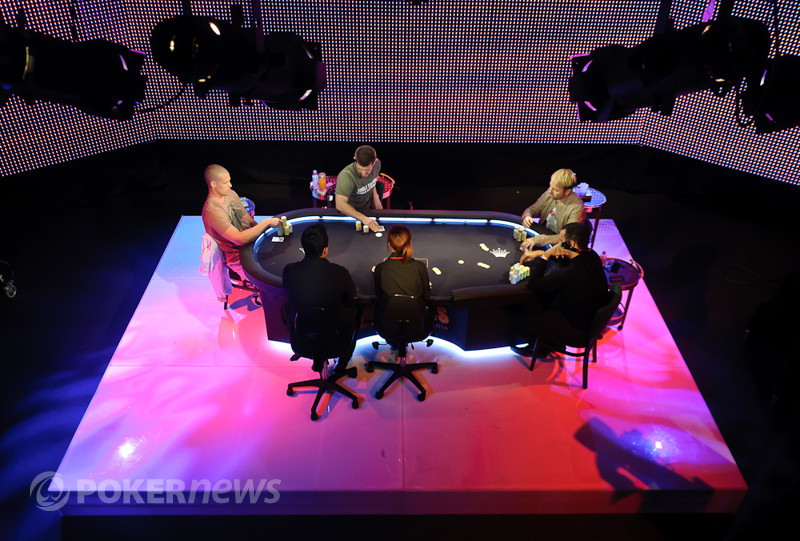 Patrik Antonius was first to act and came in with a standard raise only to have a short-stacked Gus Hansen move all in for 259,000. Both blinds got out of the way and Antonius thought for about 90 seconds before making the call.

Hansen was ahead, but Antonius picked up a straight draw on the

turn was nothing special, meaning Antonius needed a ten or aces on the river to eliminate Hansen. Luckily for the "Great Dane," the

peeled off and he doubled on the hand.

The remaining four players at the table seem to be laughing it up pretty good up under the bright lights and camera lenses. Daniel Negreanu brought up the fact that, from his point of view, this final table is just like those Onyx Cup commercials of when that series was supposed to launch. The players are getting a good laugh at the series and the general consensus seems to be how much of a flop it all was.