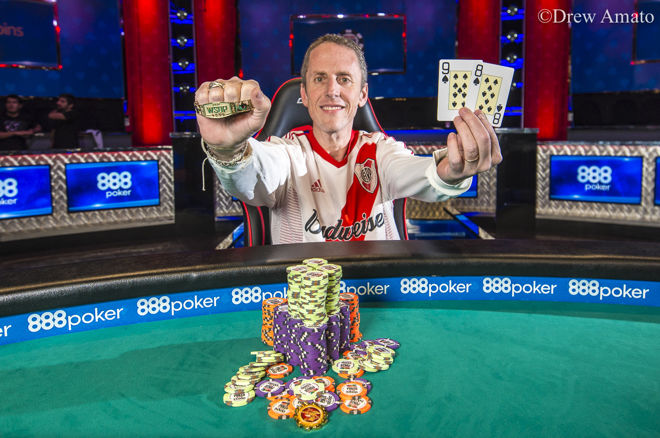 Andres Korn just became the second-ever WSOP bracelet winner from Argentina, the first being Ivan Luca in 2015. Korn beat out a field of 623 players to win Event #56: $5,000 No-Limit Hold’em for $618,285 and the elusive gold bracelet.

"The money’s beautiful, but my main thing was the bracelet.”

Korn nearly doubled his recorded career tournament earnings with this score, and it was around six times the payday of his previous biggest cash to date. But for Korn, the win was less about the money.

“The bracelet weighs so much more," he said. "I wasn’t even looking at the pay jumps; I was just focused on the bracelet. For us who play poker, this is the glory. And you don’t get that many chances to play for it.” Not that the money isn’t nice, of course. He added, “The money’s beautiful, but my main thing was the bracelet.”

“It was beautiful. I connected with every flop. I won every flip. The cards just kept coming my way. It was amazing.”

Korn came into the final table with the chip lead, and he immediately went to work. The first four eliminations came in the first level of play, and Korn was responsible for the first two — Sergio Cabrera in ninth place, and Mark Zullo in eighth place. In both hands, Korn called to put his opponent at risk with a pocket pair against two overcards and held up, improving to a set on the flop with pocket eights against Zullo. Pete Chen knocked out the next two players to gain some ground on Korn, and they were down to five players before the second level of the day.

In the next level, Korn eliminated Mike Sowers in fifth place and Marton Czuczor in fourth place to take a commanding lead into three-handed play. Against Sowers, Korn spiked a jack with queen-jack to beat ace-nine suited, and he flopped another set with pocket eights against Czuczor’s ace-jack suited to send him to the rail.

Korn dominated three-handed play, maintaining a 2:1 chip lead over the next-biggest stack throughout. After he eliminated Thomas Boivin in third place by winning yet another flip with queen-seven against Boivin’s pocket fives, Korn entered heads-up play against Chen with a chip lead of more than 2:1.

Korn ran good at the final table, as he explained: “It was beautiful. I connected with every flop. I won every flip. The cards just kept coming my way. It was amazing.” Korn said he felt good going into heads-up, as he has a lot of experience playing heads-up online, and then he just kept connecting with the flop.

“I’ve been having a good year. This is like the fifth tournament I have won this year. I’m running hot.”

In heads-up play, Korn kept the pressure on Chen, grinding him down slowly. Chen doubled up once after getting short-stacked, but Korn got him back down to around 1,000,000 chips soon after. In the final hand of the match, Korn shoved on the button with eight-nine suited, and Chen called with king-nine. Chen was in good shape to double up again, but Korn once again out-flopped his opponent (with top two pair this time), then held on to eliminate Chen in second place and win the tournament.

If Korn’s favorite hand wasn’t pocket eights before, it just may be now. Korn flopped two sets with eights to eliminate two players at the final table, then paired his eight in the last hand for his first win in the States.

Korn commented, “After today, with any eights, actually. I had the eight-nine in the last hand. All my friends were shouting, ‘This is the day of the eights!’ It worked out.”

When asked if he will be playing the Main Event, Korn said he definitely woluld. “I’ve been having a good year. This is like the fifth tournament I have won this year. I’m running hot.”

With two WSOP Main Event cashes to his credit, Korn hopes for his good run to continue into the most prestigious event in poker, which begins next week.