Notify me when Unibet Casino NJ becomes available in Virginia

Not Currently Available In Your State

Other rooms that are available in Virginia

The Jersey-based establishment has been in the game since 1997, and Trannel International Casinos Limited manages it.

Unibet is a name associated with sports betting, but the casino platform in NJ is making a name for itself.

Secured under the Malta Gaming Authority license, it’s a safe and fair casino to play. eCOGRA ensures all games are fair for players.

Our Unibet NJ review looks at the pros and cons of this impressive casino. 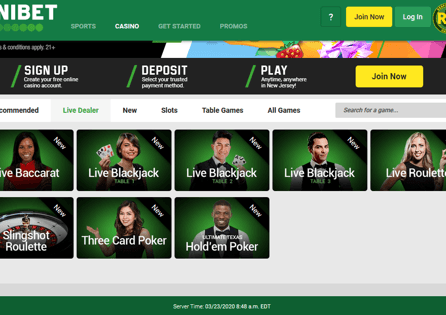 We enjoy the video slots available at Unibet. Some new games are being released at the moment, and Unibet Casino keeps on top of it.

Playing new slots is essential for players, as new technology adds to the casino experience.

Here’s a list of newly-released slots, which we think we well worth playing at Unibet Casino NJ.

We particularly like thrilling Narcos, which is based on the hit Netflix show.

It’s not all about slots at Unibet Casino, as table games aren’t overlooked.

You can play blackjack, baccarat, roulette, and casino hold’em poker. It’s not the biggest list of table games, but blackjack and roulette players will be happy.

Unibet introduced Zappit Blackjack recently, which adds excitement to one of the world’s most popular casino card games.

The live casino isn’t as impressive as we would have imagined - it offers a total of eight games to choose from. The rest of the casino sets such a high standard, which makes the live dealer platform look a touch below its best.

However, live dealers are a pleasure to play with. They’re professional, relaxed, and they’re talkative.

There’s nothing worse than a grumpy dealer, and rest assured you won’t see any of them at Unibet Casino NJ.

Overall, the games lobby at Unibet is stacked with high-quality games.

It excels in the slots department, so if spinning the reels is your thing, you won’t be disappointed.

Table and card games play second fiddle, but it’s hard not to be impressed by this gaming platform.

You'll be able to find the greatest titles and the most exciting games under UniBet's "Recommended" section. It's an amazing selection, with the best live dealer options, the newest slots and the biggest all-time hits - pick one and you won't be disappointed!

Most of the games are available to play on mobile devices. A Unibet app is available for iOS and Android users.

A 24/7 live chat service is available. It doesn’t matter what time of the day; the quality customer service team is on hand.

If you want to send an email, send one to [email protected]

Response times differ, depending on your query, but expect a response between 1-2 hours.

Overall, the customer support team at Unibet Casino NJ is one of their strongest attributes. There is no question they can’t answer, and your enjoyment comes first.

Unibet Casino is a tried-and-tested online establishment, which has an excellent reputation.

It’s not hard to see why so many people from New Jersey have been quick to sign up.

With a games lobby that consists of 600+ slots alone, that’s worth the price of admission.

New games are released frequently, which keeps the casino fresh and up-to-date.

Table games players have enough options to be satisfied, and although the live casino only gets a pass mark, we’re fierce critics.

We would happily play at Unibet Casino NJ. The welcome bonuses, which include a no deposit bonus, are well worth signing up for.