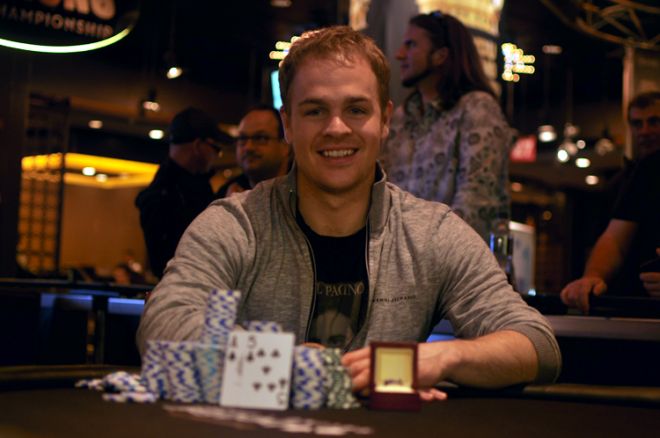 The 2013 Aussie Millions $100,000 Challenge recommenced on Monday with the final seven players of a 22-entry field. After six hours of play, Andrew Robl emerged victorious to capture the A$1,000,000 first-place prize and the title of champion.

The tournament began on Sunday when 21 players took to the felt for nearly 10 levels of play. Robl was the first to bust from that field and became the only person to exercise his re-entry option. Obviously it proved a wise decision for Robl, who was recently featured in the new poker book Ship It Holla Ballas!.

Seven players began the final table as opposed to the traditional eight thanks to a double elimination in the last hand of Day 1. With that said, only four spots were slated to be paid, so three players were going to have to leave empty-handed.

It didn't take long for the first elimination of the day, less than 20 minutes in fact, and it happened when Vanessa Selbst opened the action with a raise to 16,000 from the hijack and Tobias Reinkemeier three-bet to 63,000 from the small blind. Robl then four-bet all in from the big blind for 123,000, Selbst folded, and Reinkemeier called off for roughly 115,000.

It was a terrible spot for the German, and it got even worse when the

turn left Reinkemeier drawing dead, and after the

was put out on the river for good measure, he exited in seventh place.

The next elimination came a short time later in Level 12 with the blinds at 5,000/10,000/1,000. It happened when start-of-the-day chip leader Masa Kagawa raised to 20,000, Robl flatted from the cutoff seat, and Selbst made the call from the big blind. On the

flop, Selbst checked, Kagawa bet 36,000, and Robl folded. Selbst then check-raised all in for 79,000, and Kagawa called. Selbst showed the

for middle pair and was behind the

for Kagawa. The turn was the

, and the river completed the board with the

With Selbst eliminated, the remaining five players were left directly on the money bubble, and Niklas "ragen70" Heinecker was sitting on an extreme short stack. He made his move shortly thereafter when he opened for 40,000 under the gun and was met with a three-bet to 70,000 by Kagawa in the small blind. After the big blind folded, Heinecker opted to just call the additional 30,000 and leave himself 24,000 behind. Kagawa proceeded to bet the

and Heinecker committed his remaining chips while saying "That's good enough for me."

Neither player had hit the flop directly, though Heinecker picked up an open-ended straight draw. According to the PokerNews Odds Calculator, Heinecker had a 34.54 percent chance of survival on the flop, but that dropped to 22.73 percent when the useless

turned. Heinecker was on his feet as the dealer burned one last time and put out the

. The German online star missed and took his leave in fifth place after shaking hands with the remaining four player, who were each guaranteed at least $237,000.

Four-handed play was an extended affair, and in Level 12 (6,000/12,000/1,000) Dan Shak managed to take over the chip lead when he flopped a straight to double through Kagawa. Unfortunately for him, he lost it back over the next couple of hands, and Shak was eliminated in fourth place not long after. It happened when Robl limped on the button for 16,000, and Shak raised to 72,000 from the small blind. Robl took a minute, eventually called, and then watched Shak fire 155,000 on the

flop. Robl took his usual time, then announced that he was all-in.

and was up against Robl's

. "I need a queen ... or running diamonds," Shak added. He’d find neither as the

appeared on the turn followed by the

river. Shak was eliminated but not before the tournament director reminded the crowd that it was the third time in four years that Shak had cashed the event (he won it in 2010).

, and Robl thought for a solid minute before making the call with

Both players had flopped a pair of tens, but Kagawa's kicker had him out in front. Robl could still take the lead with either a jack or nine, and one appeared when the dealer burned and turned the

. Robl hit his straight and Kagawa was drawing to a chop, which didn't hit as the

blanked on the river.

. Unfortunately for him, Robl held

for a wheel. The

river was no help to Kurganov and he finished as runner-up for AU$610,000.

Lynn Gilmartin spoke with Robl immediately after his win.