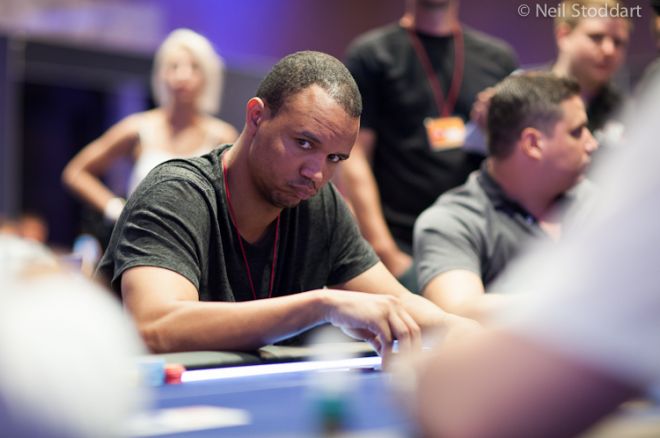 Initially, I was going to kick off the new year with another installment of Five Thoughts, but there aren’t many stories to discuss. The poker world was quite dormant during the holidays – much to the delight of the PokerNews editorial staff – and I'll conjure plenty of thoughts soon with the tenth annual PokerStars Caribbean Adventure, and the Aussie Millions right around the corner.

Instead, I thought I’d take this time and lay out a few predictions for 2013. The following prognostications are more for entertaining reading than anything else, and I’ve reduced the number to 10 because I didn’t want to keep upping the ante each year. It had to stop at some point, and let’s face it 13 is a weird number for a list.

Please don’t rush to your neighborhood bookie the nearest legal betting establishment and risk your life savings. In 2011, I correctly predicted one-and-a-half occurences (Yes, I’m taking the half), and in 2012, I improved to two.

It will be hard to duplicate last year’s impressive performance, but hopefully I can make you laugh a bit along the way.

In truth, I wanted to predict that Bill Perkins will make the final table, but even though he’s my hero in life, that’s just crazy.

This year, it looks like the field size could creep up toward 50 (with reentries), and there will be some fresh new faces in the mix, including bracelet winners Vanessa Selbst, Greg Merson, and Phil Hellmuth.

That’s is a cheap prediction, but I’ll make up for it right away:

If you draw a Venn diagram and pencil in the players who will play in both events, the middle section will be empty. Here’s who’s on my short list to do so: Phil Ivey (has always made the trip to the Aussie Millions, but I’m afraid that he’ll play in the NBC Heads-Up National Championship to promote IveyPoker.com), Dan Shak (has final tabled Super High Rollers at both the PCA and Aussie Millions), Negreanu (finally made the trip to Australia last year and final tabled both the PCA Super High Roller and the Aussie Millions $250,000 Challenge) Jason Mercier (also made the trip to Australia last year), and Dan Smith (This is a complete shot in the dark.).

You can probably add the eventual winner of the PCA Super High Roller to that list, as long as he or she is a circuit regular and/or not committed to the NBC Heads Up National Championship (a la Merson).

3. The 2013 GPI Player of the Year will make a major final table at either the PCA or Aussie Millions

Smith, the inaugural winner of the Global Poker Index Player of the Year Award, won the 2011 Aussie Millions Challenge, earning just over $1 million. Before the GPI’s inception, the BLUFF Magazine Player of the Year Award was the major measurement of yearly performance, and in 2011 and 2010, both winners made major final tables in January.

Sorel Mizzi, who won the award in 2010, finished third in the Aussie Millions Main Event, and Eugene Katchalov, who won in 2011, took down the inaugural Super High Roller at the PCA .

This isn’t to say that the POY system is flawed, rather that players need motivation to chase the award. Marvin Rettenmaier was both physically and mentally exhausted after winning the EPT Prague High Roller. He told me on the PokerNews Podcast that he wouldn’t chase the POY award in 2013 unless he won something huge early in the year – and even then he sounded hesitant.

Traveling the world is expensive and tiring, so very few players will fight for the POY award unless they get off to a hot start.

4. Howard Lederer will play in more than 1.5 WSOP events

Like it or not, it’s going to happen. He’s a lock to play in the Main Event, and I think he’ll sneak into another $10,000 event (Deuce to Seven or H.O.R.S.E.). There’s also an outside chance that Lederer makes an appearance at the Aussie Millions – he has a strong connection with the Crown Casino, winning the $100,000 Challenge in 2008.

Lederer is probably hoping that American players will receive their Full Tilt Poker money before the 2013 WSOP, but that doesn’t look likely.

5. No American players will receive Full Tilt funds in 2013

And I thought I was the king of the procrastinators.

At the Robert F. Kennedy Department of Justice Building in D.C., there’s a “to do” list hanging on the wall. Distributing the Full Tilt Poker funds is roughly 1,685th on the list, sandwiched between cracking down on jaywalking in major metropolitan cities and investigating the ties between the Knowles-Thronedashians and the Illuminati.

There are a couple of things working in my favor here. One, there will be a few more bracelets up for grabs thanks to the World Series of Poker Asia-Pacific, and Ivey loves Australia/Macau. Two, Ivey will find someone to cross book action with and/or make bracelet bets with, and he’ll play in everything. He and Mercier were sprinting around the Rio like mad men during the 2012 WSOP, and I expect no less than the same in 2013.

Three, Ivey is the best player in the world. Period. He made five final tables in 12 days during the 2012 WSOP and ran terribly when it counted the most. He also made an uncharacteristic mistake against Andy Frankenberger heads up in Event #17: $10,000 Pot-Limit Hold’em.

It’s great to have Ivey back, and it will be fun to sweat him as he continues to try and crush every soul on the tournament circuit.

Consider this my 2013 antijinx, because I love Merson. He’s a great guy, he’s an inspiration to people suffering from substance abuse, and winning back-to-back $10,000 buy-in events at the WSOP, including the Main Event, was one of the most remarkable things that I’ve ever seen.

That being said, Main Event champions tend to struggle the year after they win:

This isn’t because all of these players are bad, but because some don’t put in a lot of volume. And for the players that do put in the volume, it’s really hard to go deep in a live event. Bricking the entire WSOP is like bricking an entire Sunday online – it’s not out of the realm of possibility.

Merson himself has stated that he doesn’t like tournaments, and I think that – just like the 2011 WSOP Player of the Year Ben Lamb - we won’t see Merson much at the Rio in 2013.

8. Canada will win eight or more bracelets at the 2013 WSOP

The daily bracelet ceremonies at the WSOP are a nice touch, but the players tend to dislike the extended break to start the day. Personally, I don’t mind the extended break because it usually gives me an opportunity to catch up on work and/or peruse the internet for amusing cat gifs.

What I do find a bit annoying is the playing of the national anthem of the United States. The Star-Spangled Banner basically plays daily at the Rio (more than 70 percent of the 2012 WSOP bracelets were won by Americans), and the song gets a bit old once you hit the middle of June. It’s always refreshing to hear another song once in a while, and my personal favorite is O Canada.

Since 2010, no non-American country has won more bracelets (14) than Canada. The Canadians brought home six bracelets in 2010, including the WSOP Main Event bracelet thanks to Mr. Duhamel.

The 2013 WSOP will be the year of the Canadians - apologies in advance to the Brits.

9. Paul Volpe will win over $1 million in tournament earnings

In 2011, my Random Talented Player That Will Earn Seven Figures was Mike McDonald. He struggled for the first half of the year, and then won Event #2 of the Epic Poker League in September, earning $782,410. He added another six-figure score in October, final-tabling the EPT Sanremo High Roller and crossing the million-dollar mark.

Countless poker players would kill for only $300,000 in earnings.

In 2013, my million-dollar man is Paul Volpe, known as paulgees81 online. He is a very solid player who went very deep in the WSOP Main Event, finishing 20th for $294,601. He’s won over $3.5 million grinding MTTs on Full Tilt Poker and PokerStars, and I’m confident that he’ll play a lot of events in 2013.

Why am I confident that he’ll play in a lot of events? Here’s a small conversation we had during EPT Prague:

Paul: Nothing. I’m probably going to hop into the €5K turbo.

Rich (looking over at the field): It doesn’t look like there are a lot of spots in it.

Paul: Yeah, I probably shouldn’t play, but I’m a gambler.

That’s the kind of player I want to back.

10. A real money hand of online poker will be dealt in New Jersey

New Jersey Governor Chris Christie wants to be elected President of the United States in 2016, and he has a chance to do something that will separate him from opposing candidates. Stimulating an economic boom via online gaming is quite plausible, and there’s an outside shot that the rubber could hit the road in 2013.

This is a complete shot in the dark, but I think that New Jersey will be the first state to deal a real-money hand of online poker, and I think it could happen this year.