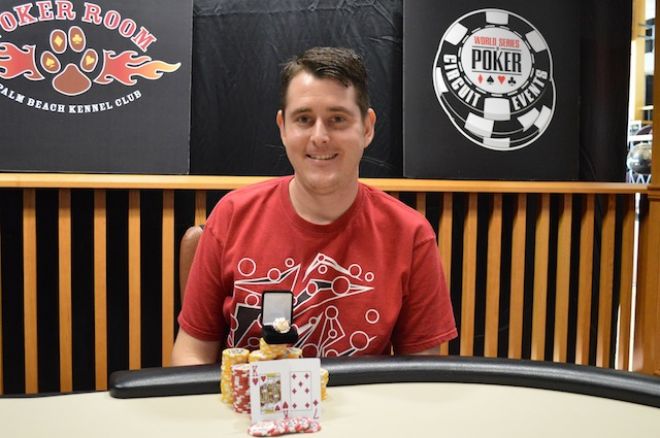 Less than a month removed from the scandalous counterfeit chip debacle at the 2014 Borgata Winter Open, another controversy has erupted at the World Series of Poker Circuit Palm Beach Kennel Club in Florida. According to the WSOP’s Jess Welman, a player was caught trying to remove chips from a tournament.

“Yesterday, after Event 9, the $1,125 No-Limit Hold’em event concluded, tournament staff discovered a player had removed chips from the chip set being used in the event,” Welman revealed in a post in the WSOP Blog. “The Palm Beach Kennel Club and local gaming authorities are currently conducting an investigation into the event and the player's eligibility.”

The player in question appears to be three-time gold ring winner Chan Pelton, who topped a field of 181 in Event #9 $1,125 No-Limit Hold’em to win his third ring and $47,061 in prize money, which has purportedly been frozen by the property pending an investigation. Pelton apparently tried to pocket a T25,000 chip, but was caught by tournament staff. The chip swipe is said to have occurred after he had won, and Pelton claimed he only wanted it for a souvenir, though many posters in a dedicated TwoPlusTwo thread believe his real intention was to use it in the $1,675 Main Event.

A week earlier, Pelton had won his second ring by taking down Event #2 $365 Pot-Limit Omaha Eight or Better for $12,181. The two wins made Pelton an overwhelming favorite to win the stop’s Casino Championship, which comes with a seat into the 2014 National Championship.

“Until this investigation is wrapped, we will be unable to finalize Casino Champion standings for the Palm Beach Kennel Club stop, as this event has bearing on the final points standings in the race,” Welman wrote. “We will announce the Casino Champion winner once we have a resolution, but it will likely be determined after the action wraps here in Palm Beach on Monday.”

This wouldn't the first time Pelton found himself in trouble. On May 25, 2012, KBTX Bryan/College Station, TX reported that then 29-year-old Pelton was arrested for possession of a substance and possession of marijuana after police found him asleep in a running car.

According to a probable cause statement, police woke him, searched the car, and discovered a pound of packaged marijuana, Xanax pills, and $1,760 in cash, which he claimed as online poker winnings. Pelton reportedly admitted to police that he intended to sell the marijuana, though he later denied this claim.

PokerNews will have more on this story as it develops.