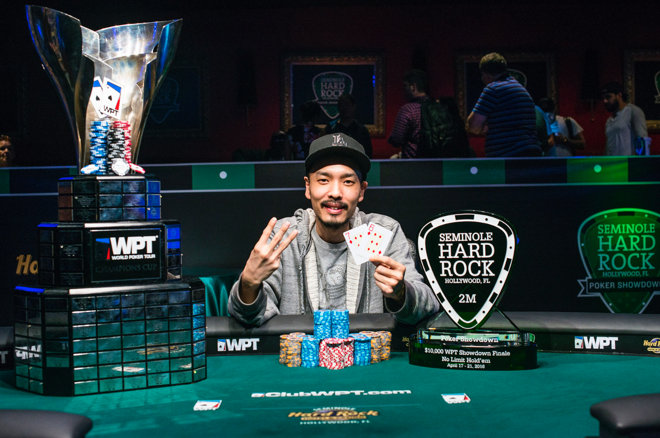 It was just over one year ago that Anthony Zinno joined Carlos Mortensen and Gus Hansen in the three-time World Poker Tour champion club. Now, that trio has company in the form of Chino Rheem, who won his third WPT title after besting a field of 342 entries in the Seminole Hard Rock Poker Showdown $10,000 Finale.

"Honestly, because of where I'm at in life, man, it's probably number one right now," Rheem said when asked where this WPT win ranked among the three he has earned. "With everything I've been through and where I'm at in life and where my head's at, this probably would be the number one, even though it's not even a million-dollar score. It's the smallest one I've done of the big ones, but this ranks as being up there as far as timing and everything."

His two other WPT titles? Rheem won the 2008 Doyle Brunson Five Diamond World Poker Classic for over $1.5 million and the 2013 WPT World Championship for $1.15 million. Now, with another $705,855 in winnings, Rheem moved over $8 million in career live tournament earnings.

With Rheem, though, there's always the question of his past, and while he's enjoyed plenty of success in the poker world, Rheem has a few scars he carries along with him. He's had some much-talked-about money troubles and was once put on probation by the Epic Poker League after winning its inaugural event.

But now, Rheem hopes to look ahead to greener pastures, and he hopes he can continue to write the story of his legacy as someone respected for his play on the felt.

"What do I want my legacy to be?" Rheem repeated out loud to himself as he pondered the response. "Amongst my peers, I just honestly want to be accepted as a good player, you know what I mean? That's good enough for me. You'll never hear me say I'm the best, and I know I'm not, but if my peers can say, 'You know, Chino can play,' then that's good enough for me."

Outside of his three WPT titles that have hm in such elite company of the other three-time winners, Rheem's results are quite impressive. As mentioned, he now boasts over $8 million in live tournament earnings, which includes his largest career score of nearly $1.8 million when he placed seventh in the 2008 World Series of Poker Main Event. He has a handful of other WSOP final tables, but no gold bracelets, and his Epic Poker League win saw him defeat one of the toughest fields in tournament history to win $1 million back in 2011.

"I don't know, I don't want to sit here and B.S. and say that I sit there and try and go in and play my best every tournament, that every buy-in doesn't matter," Rheem said. "I keep it real. There's some tournaments that are a $300 buy-ins with rebuys and I fire that shit in. I guess when it's a bigger event and it's a little more prestigious, I'll admit that I try harder than I should. I should try my best in all of them, but I'll admit that maybe I try harder in the bigger events. I don't know, the higher the money, the more money you can win I guess, so the harder I try. I just keep it 100."

On the final hand, which occurred after he had worked out a sizable chip lead against Aditya Prasetyo, Rheem moved all in from the button with the

. Prasetyo called with the

to put himself at risk, but the

board gave Rheem the win.

Prasetyo was left with a runner-up payday worth $484,130 and all eyes were on Rheem.

"The ones I owe money to are coming out of the woodwork, but these are good problems to have," Rheem said after in his post-tournament interview, looking back at the group of maybe 20 people in his "corner."

Rheem will have one more chance to shine in Florida, as he's now guaranteed an entry into the WPT Tournament of Champions thanks to this victory. As a previous WPT champion, he had the option to buy in, but as part of his winnings in this event came a seat, so his entry is now paid for in what is surely going to be a very tough field of notable faces. But, like he also talked about earlier, Rheem believes he's one to rise to the occasion.

"I personally think I play better when I play against better players," Rheem said of the WPT Tournament of Champions event. "Tomorrow;s tournament is definitely not a soft field, it's going to be tough. I just hope whatever run good I used in this I still have some left over, then I can carry it on to tomorrow."