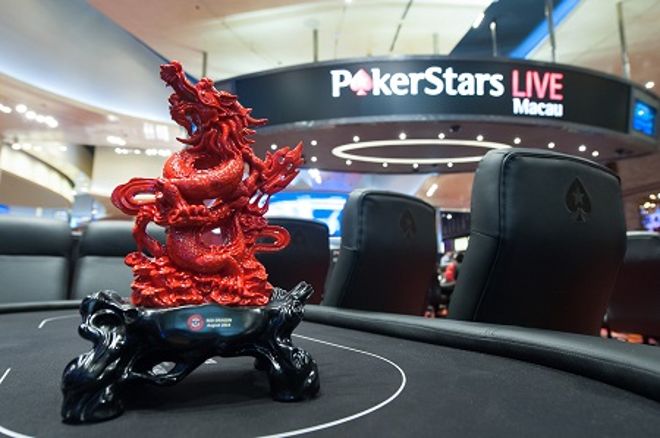 Ever since poker's popularity peaked in 2006, when a record 8,773 players entered the World Series of Poker Main Event, the industry has looked to Asia as the place where the game's next boom will likely occur.

Now, a decade later, the Chinese market appears to have opened up, and with tournaments in Macau setting record numbers again this week, the promise the Asian market has long held appears to finally be coming to fruition.

"It's a tremendous achievement and I couldn't be more proud of our team," said PokerStars Asia Pacific Poker Tour President Mark Blake. The PokerStars Macau Poker Cup 25 Red Dragon Main Event broke its own all-time record last week as the largest freeze-out event in the Asia-Pacific region with 1,145 players and an almost HKD $12 million prize pool. "The player support for the MPC series has been outstanding and we're already making plans to grow this poker festival further in 2017."

The previous record was set last March when the MPC Red Dragon had 1,075 entries. In fact, this summer's MPC is the fourth consecutive record-breaking poker festival at PokerStars LIVE Macau, both in terms of total players and prize money.

With a population greater than 1.3 billion people, and with gambling a clear part of the cultural fabric, China has long been seen as poker's next big hope.

Senior Marketing & Business Development Manager for PokerStars' Live Events in Asia, Fred Leung, said Macau tournament numbers are up across the board and that's exactly where all this growth is coming from.

"All the APPT Season 10 events in Macau have set new records," Leung told PokerNews. "But even the smaller series PokerStars LIVE Macau holds, like theAsia Championship of Poker Platinum Series, has seen record highs. While overall gaming revenue in Macau is down, it has been an amazing year for poker for the PokerStars room."

As reported by PokerNews' Inside Gaming, total gaming revenues in Macau actually showed a 1.1 percent year-over-year increase in August 2016, but that was the first positive figure since July 2014, marking 26 consecutive months in decline for the Special Administrative Region of the People's Republic of China and Asian gambling mecca.

PokerStars opened it's first ever live poker room, PokerStars LIVE Macau, at the City of Dreams property in May 2008, with designs of being at the forefront of what the Asian market potentially held for poker.

Since that time, the room has played host to the biggest tournaments in Asia, including the MPC Red Dragon series, GuangDong Ltd Asia Millions, Macau Millions, APPT Macau and the Asia Championship of Poker. Leung said these events continue to buck gaming revenue trends in the region every time out, mostly thanks to the Chinese market.

"We're seeing an emerging poker market in Asia which was always the opportunity PokerStars saw when it decided to build its first live poker room here in Macau," Leung said. "It's not a coincidence that the tens of millions of Chinese visitors have brought the game back to China where it is gaining popularity daily. When I first started in 2008, China was less than 10 percent of the field and I'm being generous. China now represents 58.9 percent of the Red Dragon field this year."

Plus, it's the kind of growth Leung says is sustainable.

"We're not even close to the peak," he said. "There are brand new players at every event and it's not just a handful here or there. It sounds so corporate, but we try to give them the best poker experience we can, and they take that back home, share with their friends and bring a larger group next time. Clearly they always compare PokerStars events against other competitors, but the numbers say we're doing a lot of things right."

In an exclusive interview earlier this year, former casino junket operator-turned-high-stakes poker player Paul Phua, who's Chinese-Malaysian junkets helped build the Macau casino business, detailed how he and other junket operators in the region began playing some of the biggest cash games in the world in 2008, drawing some of poker's biggest names to the region as well.

A crackdown on corruption in the junket business in Macau, not related to Phua, has driven gaming revenues down over the last few years, and Phua said many of the junkets have moved elsewhere, including the Philippines, Australia and across Europe. Since the big games revolved around all the junketeers and their VIP players, the stakes appear to have gone down in Macau.

Phua has since moved his game to Manila, Philippines and Montenegro, where he reportedly has a business interest in a local casino property. As a result, the live cash game scene in Macau may not be what it once was, but it is still striving at slightly lower stakes, thanks to the influx of new Chinese players.

With the tournaments continuing to break records each time out, this cash game scene is likely to continue to grow.

Originally from Shanghai, China, PokerStars Team Asia Pro Celina Lin said the poker scene in Macau is growing daily thanks to the Chinese market. Heading into the future, she says Chinese players will begin to show up across the globe as well.

"I remember when I first started playing the Macau Poker Cup seven years ago, the Red Dragon had 30-something player fields," she said. "Now we're breaking records every year and it’s not just in Macau or Asia anymore. The growth of the Chinese players around the world has been phenomenal."