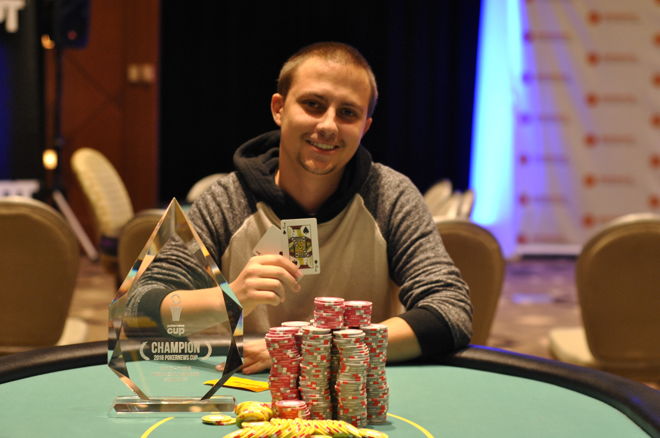 The first PokerNews Cup event in North America held at the Borgata Hotel Casino & Spa is in the history books, with Ryan Van Sanford claiming the title, along with $68,676. The 23-year old who currently lives in Colorado bested a field 120 players in this $2,150 buy-in tournament, putting his lifetime tournament earnings up over $900,000.

Van Sanford defeated Day 1 chip leader Dominic Picinic in a heads-up battle that only lasted about 45 minutes. Van Sanford, who held the edge during most of the heads-up play, put an end to the tournament in a hand that saw Picinic raise to 150,000 holding

on the button. Van Sanford, took a short moment to think about things before moving all in with

. Picinic made the call, which would be the end to his tournament. The board was no help to Picinic, rolling out

and shipping all of the chips to Van Sanford.

After the win, Van Sanford told PokerNews that he was thrilled that the PokerNews Cup was added to the Borgata Poker Open schedule, as it was a great addition for players who busted out of the WPT Main Event. When asked where the PokerNews Cup trophy would sit in his home, Van Sanford said, "All my trophies go to my dad, so I'm sure he'll find a special place for this one."

The second day of play at the PokerNews Cup moved swiftly, as only 26 players remained after Day 1. Players made a furious dash to the money which was reached when David Fink eliminated Jakov Klatzkin after his ace-queen out-raced the pocket sixes of Klatzkin when a queen hit on the flop.

After the bubble burst, it took another two hours for the final 18 to play down to a final table of nine, and it was David Olshan who was the unlucky 10th-place finisher. Olshan shoved in early position for 146,000 with pocket sevens and was called by Jayaram Kovoor-Chathoth who was holding a superior pair of jacks. The final board read

and Olshan headed to the cage to collect his payout.

There was no dominant force at the final table, and it seemed as if the short stacks continued to double up time each time they were in jeopardy of elimination making for an unpredictable conclusion.

Van Sanford, the eventual champion made his move with five players left when he doubled through Barry Hutter with pocket queens over Hutter's pocket jacks. Van Sanford than eliminated Christian Harder in fifth place when his king-queen flopped not only one but two queens against the pocket sixes of Harder.

Players took a 45-minute dinner break when play got four-handed, and after the final four ate, Van Sanford went on a tear knocking out Barry Hutter in fourth with Van Sanford's king-ten beating Hutter's flush draw after the two got all in on the flop. Van Sanford than knocked out Sergio De Zen after he raised to 60,000 on the button with

and called the 200,000 shove from De Zen who was in the big blind holding

flop was solid for Sanford, although the clubs left De Zen with plenty of outs. The

on the turn, and the

on the river, however, were no help for De Zen leaving Sanford to battle Picinic for the title.

While the inaugural PokerNews Cup is in the books, the event is sure to back in North America and in Europe in the not-so-distant future. Stay up-to-date by visiting PokerNewsCup.com.

Chris Moneymaker on the Hall of Fame, Being an Ambassador and the State of the Game Today