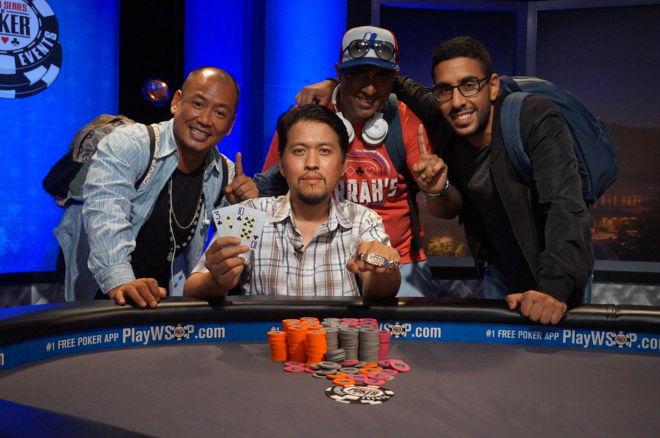 With the November Nine removed this year, the final World Series of Poker bracelet awarded on U.S. soil would go to the winner of the Global Casino Championship.

The GCC brings together all of the players who have excelled most throughout the season on the World Series of Poker Circuit, and Sean Yu fought his way through the tough field of 124 runners to capture $296,341 and a gold bracelet. Yu, who already had two WSOP Circuit gold rings to his credit, won his seat into the event by defeating Eli Elezra heads up to win WSOP Circuit Planet Hollywood last September.

With 122 qualified players, it appeared a few chose not to make the trip as just 115 "freeroll" entries were logged in the GCC, which took place at Harrah's Cherokee this year. Nine more players bought in — previous year's WSOP Player of the Year top 100 and ring winners from the past Circuit season are eligible — for $10,000 each to make it 124 and a $1,090,000 prize pool.

There would be only 19 places paid. Caufman Talley, Ryan Jones, Roland Israelashvili and all-time circuit cashes leader Rico Carli were among those making it into the money but falling short of the official final table of eight, according to the live updates.

Once there, Nikhil Gera went out in eighth when he got in a raising war preflop against Alexander Lakhov and found his nines couldn't overcome the Russian's jacks. That brought up the TV table bubble, with the final six set to bag and play in front of the cameras for Day 3. It burst in a very unusual hand.

Will Berry, who led PokerNews' list of players to watch for the 2017 WSOP from the American circuit, was the shortest stack left and shoved for 10 big blinds. Lakhov called in middle position, as did Yu in the small blind. With the board reading

, Yu thought they checked it down and tabled

Apparently, he'd misinterpreted a Lakhov shrug as a check, and the Russian bet 200,000, a little over half the pot. Yu decided to fold, and Lakhov showed

Twenty-eight hands into the TV table, WSOP Circuit Hammond champ Dylan Linde shoved 15 big blinds from the small blind over a button open from Lakhov. Josh Reichard woke up with

in the big blind and isolated Linde's

Direct buy entry Jason Mercier was the most experienced and accomplished player to make the final table, but the five-time bracelet winner went down in fifth. He shoved over a raise from Yu with ace-queen and ran into Yu's kings. A queen-high flop gave Mercier a shot, and he turned a flush draw as well, but the river brought no help.

Jesse Cohen was the shortest at that point, and he shoved just under 20 big blinds with sevens, only to have Reichard wake up with tens in the big blind. Reichard turned his opponent dead to send Cohen to the rail in fourth.

turn, and the river was a

After a couple of minutes, Yu called with

and Reichard was forced to show his worthless

"I thought he was trying to get me off the hand because I could easily have a three there, you know?" Yu said afterward. "So, if he has a value hand, he is probably going to check and pot control."

With that successful pick off, Yu took nearly a 3-1 lead into heads-up play. He made quick work of Lakhov heads up, finishing him in less than 10 hands. He check-shoved a backdoor flush on the river to end it, getting snap-called by Lakhov, who held ace-jack on a jack-high board and didn't find a fold.