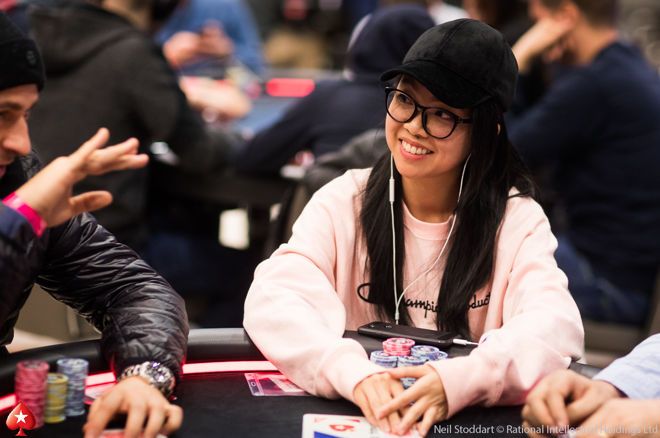 Day 2 of the €5,300 EPT Main Event has come to an end after five levels of 90 minutes each with Malaysia’s Natalie Teh claiming the chip lead here in the Hilton Prague with 786,000 in chips. After the bubble burst in the last level of the night, 137 players managed to find a bag to seal for Day 3.

As most people are aware, a Platinum Pass will be given to the winner of this Main Event, but Teh already has one. She was awarded a Platinum Pass through the “Next Great Poker Brain” quiz that PokerStars Team Pros Igor Kurganov and Liv Boeree had set up. Teh started playing while she was in university but decided to quit her job at the end of last year and play professionally this year. And she’s doing pretty well as she has already racked up fifteen cashes in 2018.

Teh won a huge pot to jump into the chip lead when she rivered a set of queens against Michal Schuh who held pocket aces. Even though there were several people competing for that chip lead, Teh came out victorious in the end.

Parker Talbot follows Teh with 773,500 in chips. The popular Twitch streamer from Canada is more known for his online achievements but is making himself more known in the live circuit too. With over $400,000 in live tournament results, he will be looking to add even more to that.

Closing the podium is Evangelos Bechrakis from Greece who bagged 730,000 tonight. Bechrakis finished in 3rd place in the €2,200 EPT National High Roller a mere two nights ago for €144,900 which was also his biggest live cash ever. Anton Wigg (708,500) and Arthur Conan are the only other players who have managed to collect more than 700,000 throughout the day.

The day started with 440 players as 25 players decided to reenter or buy in before the tournament clock kicked off for the first 90-minute level of the day. This meant that there were 1,174 entries in total for the Main Event, which includes 281 reentries. This created a total prize pool of €5,693,900 with 175 players getting paid at least €8,710. The winner on the final day will walk away with €1,020,000, the beautiful PokerStars trophy, and a Platinum Pass package worth $30,000!

PokerStars Team Pros Muskan Sethi and Fatima Moreira De Melo also couldn’t make it into the money. Sethi shoved her ace-queen into the ten-nine of Bechrakis who flopped two pair and Moreira De Melo’s pocket jacks couldn’t beat the ace-queen of her opponent as he hit a queen on the flop.

The bubble lasted about 40 minutes, Mateusz Wozniak first doubled up through Pavel Veksler with pocket kings against Veksler’s pocket queens and hit quads. A few hands later, Wozniak burst the bubble by dealing Veksler the final blow when it all went in on the river. Veksler’s two pair couldn’t beat the flush that Wozniak had rivered. When the tournament director announced that the bubble had burst, the applause could be heard from all players spread over the tables here in the poker room.

With an hour left to play, almost 40 players would bust during that hour, collecting their min-cash, either bitterly disappointed to not make Day 3, or extremely happy to have won money with their short stacks. The 137 surviving players will return at noon tomorrow, Friday, December 14, to continue to play Level 16 which features a small blind of 2,500, big blind of 5,000, and a big blind ante of 5,000.

The PokerNews live reporting team will be on the floor again to bring you all the action from the first card of the deck until the final chip has been bagged so make sure to keep following the updates!