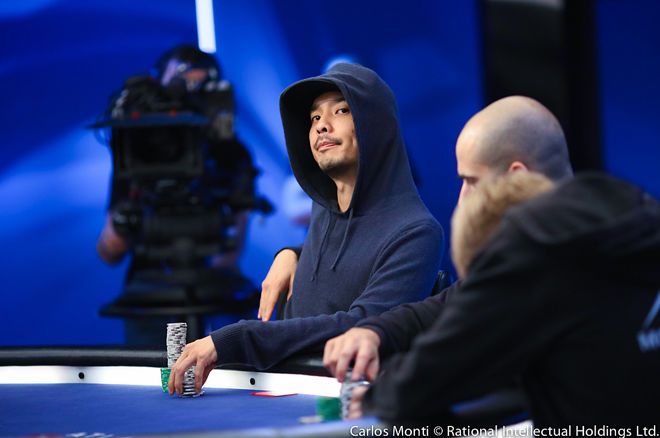 The $10,300 Main Event of the 2019 PokerStars Caribbean Adventure is one step closer to crowing a champion at the Atlantis Resort & Casino, as just six players out of an 865-entry strong field remain in contention at the end of Day 4.

The penultimate day was the David "Chino" Rheem show, who soared to the top of the leaderboard and remained there until all six finalists bagged their chips. Rheem enters the final day with 7,550,000 in chips, followed by Canadian online qualifier and benefactor Scott Wellenbach (6,015,000) and accomplished poker pro Brian Altman (4,995,000).

Vicent Bosca looks to become the second Spaniard to win a major event at the festival after the triumph of Ramon Colillas in the $25,000 PokerStars NL Hold'em Players Championship. Daniel Strelitz (2,355,000) and Pavel Veksler (2,035,000) also have plenty of room to maneuver with 29 and 25 big blinds respectively.

The day started with 20 hopefuls remaining, and the early play was rather cautious with several short stacks doubling up.

Rajesh Vohra and former November Niner Bob Bounahra were the first to fall, followed by Danny Tang and Enrico Camosci. This set up the final two tables and Scott Wellenbach, who had qualified for this event in a $500 satellite, was second in chips behind Matthias Eibinger after doubling through start-of-day chip leader Tommy Nguyen.

Joao Simao was eliminated by Christoph Vogelsang and Matt Berkey bowed out next. They were joined on the rail by Eibinger, who went from hero to zero and out in fourteenth place. Within three big hands, Chino Rheem had taken all chips off Eibinger and established a commanding lead. First, he rivered the nut straight and got paid off, then scored a massive double when turning a full house against the flopped trips of the Austrian. Eventually, Rheem finished the job with seven-six suited versus pocket queens, as his flopped middle pair and flush draw went runner-runner straight to oust Eibinger.

Start-of-day chipleader Tommy Nguyen and Ami Barer became the next two casualties, and Rheem then sent Christoph Vogelsang to the rail in twelfth place.

Over on the outer tables, the jovial Rheem had said he wanted to "win just one hand against the best," and sure did so on the feature table soon after. Down to twelve big blinds, Vogelsang three-bet shoved with king-jack, and Rheem called with ace-five to hold up on a ten-high board.

Jeff Hakim missed out on the unofficial final table after failing to improve with king-trey suited against the ace-queen of Pavel Veksler and the remaining nine players combined to one table.

With Rheem at the top of the counts, it didn't take long for him to further cement the lead. Scott Wellenbach closed the gap, only for Rheem to pull further away when his ace-nine suited rivered a straight against the pocket tens of Simon Deadman to reduce the field to eight.

The eight headed into the dinner break and the penultimate level of the day brought no elimination either. In the final level of the night, Marc-Andre Ladouceur ran with pocket tens into pocket kings, and a few minutes later the final six were set when Mihai Manole ended up second-best with king-ten suited against the queen-jack of Vicent Bosca.

The remaining six players will return to the feature table on Wednesday, January 16, 2019, as of 1 p.m. local time with just under 74 minutes left at blinds of 40,000/80,000 with an 80,000 big blind ante. The PokerNews team will provide hand-for-hand coverage until a winner is crowned. PCA Main Event live updates can be found in the PokerNews Live Reporting section.