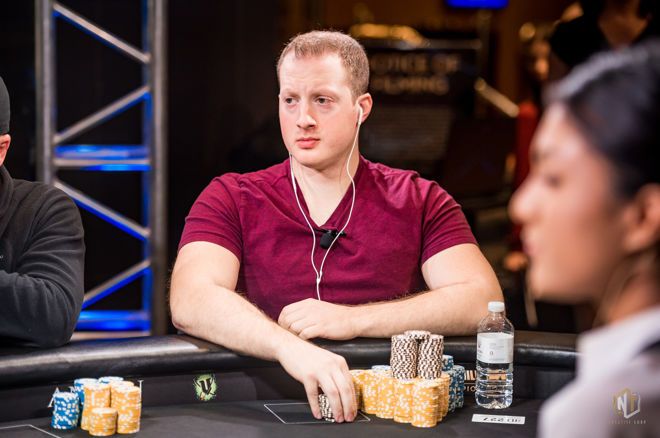 The seven-handed final table of the record-breaking 2019 Aussie Millions AS$10,600 Main Event is set and all remaining hopefuls have earned themselves one day off before playing down to a champion. Out of a record field of 822 entries, only seven players remain and they have already locked up AU$242,000 for their efforts. However, all eyes are set on the top prize of AU$1,850,000, the bragging rights and ANTON championship bracelet that comes along with it.

One that already knows what it feels like to sit down on the final table in the biggest casino complex of the Southern hemisphere is Mike Del Vecchio, who finished fifth one year ago at the Crown Casino Melbourne. After a dramatic end of the day, the American jumped into the top spot right before bagging after doubling through New Zealand's Hamish Crawshaw on the final table bubble.

In four-way action on the outer table, Del Vecchio flopped the best of it with pocket fives for a full house and got action from Crawshaw with ace-ten suited for trips tens. The turn and river were both blanks and Del Vecchio, who was railed by 2018 champion Toby Lewis during this pivotal hand, jumped into the lead. Just one hand later, the final table bubble burst on the feature table after Robert Glasspool came up short with pocket sixes against the pocket jacks of Matthew Wakeman.

For Kenney, there will most likely be no day off as he already confirmed to join the action on Day 2 of the AU$100,000 Challenge.

“That's great timing, now I can win both,” Kenney said with a grin on his face in the penultimate break of the night.

While Kenney returns with the shortest stack of just 18 big blinds, there is little doubt over his confidence at making a serious run for the Aussie Millions Main Event title.

The penultimate tournament day started with 38 players still in contention and it took fewer than 10 minutes to set up the six-handed redraw, a change in format uniquely used at the Aussie Millions. Andrew Michael and Cole Swannack fell short of the six-max action and a double elimination set the pace for the next few hours right after the action got back underway.

Jack Salter, who recorded one of his best results at Crown Casino in 2014 when finishing second in the World Series of Poker Asia-Pacific Main Event, had to settle for 18th place and Michael Addamo fell short after adding a victory on home soil to his poker resume after winning not one but two WSOP bracelets in 2018.

Salter flopped best with jack-ten suited only for Gyeong Byeong Lee to hit a runner-runner straight with eight-seven suited. For Addamo it was a classic coinflip that decided the fate of the Aussie and his ace-king ended up second-best to the pocket jacks of Bjorn Ostby.

Down to the last two tables, Norihiro Otani doubled through Del Vecchio with aces versus kings, but his Japanese rail had barely stopped celebrating when Otani dropped to the bottom of the leaderboard a mere 15 minutes later. Crawshaw outflopped Otani with queen-nine versus ace-queen and held up to kickstart frantic action on the feature table.

Greg Heaver ended up all in with pocket sixes against the kings of Crawshaw and flopped a six in the window, but it was followed by a king on the turn to send the Kiwi to the top of the counts.

Otani doubled once but eventually bowed out in 11th place and handed over his hand-designed colorful hoodie to Crawshaw. He was followed to the rail by David Wang and Ostby was ousted by Andrew Hinrichsen. In a three-bet pot, Hinrichsen in the big blind flopped top two pair with seven-four and Ostby jammed with pocket sixes to get snap-called by Hinrichsen.

The final table bubble lasted all but a few hands and Del Vecchio skyrocketed into the top spot when he flopped a full house in a four-way pot. One hand later, it was all over for Glasspool on the feature table and the remaining seven players bagged up for the night.