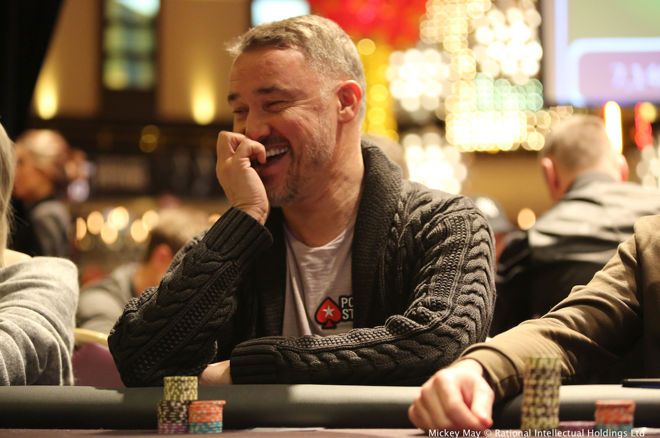 When PokerNews last spoke with Stephen Hendry, world record snooker champion, he’d been signed up by PokerStars as an ambassador. Traveling to Ireland, he sat down in the PokerStars Festival and played his heart out.

With 544 players taking part, Hendry made the money and notched a 56th-place finish.

“I wasn’t good enough to just keep playing random hands, especially postflop, so I used my patience," he said. "To survive that long, you can’t just wait for good hands. You have to play. I’d look for the players who wouldn’t expect me to do something and use my image to my advantage. I could tell which players I could use my ‘rock’ perception against.”

Having made the second day and loved the experience, Marbella was next. Where some ambassadors might have shied away from the travel element of poker, Hendry embraced it.

“I’ve always loved to travel," he said. "When snooker started to branch out to other countries, I loved it. You can see so many different parts of the world playing snooker and poker. If you’re a young guy who is good at the game, there’s never been a better time to play. There are so many tournaments available.”

Hendry’s experience in Marbella didn’t produce another cash, as he fell just short of the money, but he picked up on a key element of modern poker — aggression. There, Hendry watched as a young German player ran over the table.

"It seemed like he didn’t even look at his cards, he just raised," Hendry said. "It can be intimidating and that’s what I wanted to do in snooker — intimidate my opponents.”

That aggression resonated with Hendry. It recalled his own style in snooker, which is where he really left his mark.

Before he came along to dominate the 1990s, snooker was a game played at range, with safe play a revered strategy. The man known as "The Golden Boy of Snooker" blew those tactics out of the water.

“I went for everything and wanted to clear the table in one visit," he said. "I had no interest in playing safe or getting drawn into tactical battles."

As with poker, such aggression is now commonplace. It's common knowledge that aggressive play is winning play, and Hendry enjoys that about the game — it plays into the mental side of his sporting brain, something that's always been a strength.

From the very first time he played on TV screens, his temperament was talked about. The development of that resilience stems from his time as a teenager in Scotland. It's something Hendry believes is innate.

"It’s a big thing, something that I was obviously fortunate to have," he said. "When the biggest pressure was on, I was always able to control my emotions.”

"When the biggest pressure was on, I was always able to control my emotions.”

Control it he did, to spectacular results. He credits his family with phenomenal support and says that they always believed he’d achieve great things.

But Hendry also mentions his manager at the time, a certain Ian Doyle, who he credits with instilling self-belief and work ethic in him. That helped him emerge at a time when others were dominating the scene.

If you’d said to snooker fans in the 1980s that Steve Davis’ six world titles would be overtaken in the next decade, they might have thought you crazy. But it happened, and six of those titles came in the dominant duel of the decade — Stephen Hendry versus Jimmy White.

“I used to always know if Jimmy was under pressure in the finals," Hendry said. "He’d start to sweat a bit more, start to fiddle with his hair or his hands. Even at the table, he was hitting balls harder than he would be normally.”

Hendry strikes a parallel between snooker and poker as far as players needing to have short memories.

“If you miss a shot at snooker, and the guy clears up to pinch the frame from you, you’ve got to get that out of your system and play the next frame," he said. "It’s similar in poker. If you lose an unlucky hand, you’ve got to forget that by the time the next card is dealt.”

Work ethic is also a common thread. Hendry was a prodigious talent in the game of snooker, but he learned a lot from his predecessors, including the man who introduced him to poker.

"If they do miss, you’ve got to be ready to pounce. It’s the same in poker."

“Steve Davis brought dedication into the sport," Hendry said. "He was practicing for 5, 6 or 7 hours a day. He was the first person to do that religiously and get to that level. I learned from his work ethic. You have to invest time into it, just like poker.”

The notion of soft focus and deep focus applies to many mind sports, such as chess. The ability Hendry had to stay focused and always be ready to take his chances is a skill he had to hone.

“As a snooker player you’ve got to have that in you, otherwise it’s difficult to be successful. I sat in my chair and tried to stay relaxed, try to pick out the situation of the balls and where [my opponent] might possibly trip up. If they do miss, you’ve got to be ready to pounce. It’s the same in poker. When I’m not involved in a hand, it’s easy to completely switch off. You can relax, but you’ve got to be alert to a situation.”

Always dialed in, Hendry had a winner's mindset that is less common nowadays.

“When I was at my best, people used to say, ‘You never smile.’ But my job was to go and win the tournament. I wasn’t like Dennis Taylor who told jokes. It’s like a lot of sports now, people trying to make money and be the best.”

As he sees it, players in various sports have less hunger than they did in his era, complacent with prize money that can come for finishing short of first.

“There’s so much money in a lot of sports that people can win a tournament a year or get to the semis and be happy. Football's the best sport; it doesn’t matter if you don’t play or play badly, you can still collect £200,000 a week.”

"For me, being number one was the most important thing rather than settling for having quite a nice life."

It was very different in the 1990’s when it was win or bust like the old Poker Million tournaments.

“In my day, the big money only came from winning. For me, being number one was the most important thing rather than settling for having quite a nice life. It’s a mentality that has crept in now. I used to criticise Judd Trump for having flash cars and nice holidays and only winning the odd tournament.”

That may have lasted until Trump’s recent win at The Masters, which he followed up with his win in Cheltenham last week.

“After The Masters, he was interviewed and admitted that he did waste it a bit and that he now wants to be number one. He’s changed his mentality, but a lot of people don’t have that.”

Hendry’s desire to be the best is undampened by the passing of time, and like many sporting stars, he sees poker as a challenge that fits the mentality he succeeded with in his profession.

Returning to the Felt

Hendry is a busy man these days, with his role as a BBC pundit one he revels in. He speaks about snooker across the globe for all the major UK channels and is an ambassador out in China, the fastest-growing market in snooker. As if that wasn’t enough, he performs #CueTips on Instagram for his many fans, with over two million views. He’s ready to bring that level of enthusiasm to poker every time he plays, and just like snooker, he believes attitude is important.

“In poker, there is that luck element. That’s why you don’t see the best players at the World Series final table every year. But I do see poker as a sport; there’s a skill and dedication about it. Attitude goes a long way. Having that work ethic and confidence, that belief in yourself, it’s so important in everything. You’ve got to have that inner belief."

The "King of the Crucible" has no shortage of inner belief, and he'll be returning to the poker felt before too long, for the love of the game and the competitive challenge it presents. Every time he does, you can expect what he always delivered in snooker - a top attitude, an even temperament and a love of performing under pressure at the felt.