How a Snooker Player Plays Poker with Stephen Hendry (Part One) 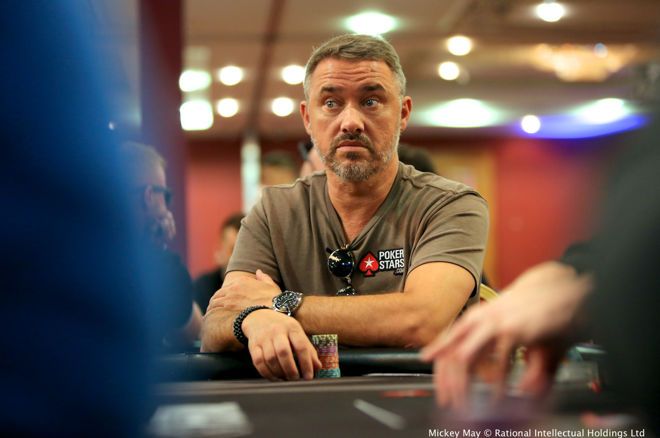 With seven World Championship titles, Stephen Hendry has never been eclipsed in snooker. His record in ranking tournaments is unsurpassed, with 36 titles and a reputation as the best ever.

But, over the years, Hendry has played at the poker felt as well as the snooker table. How does a snooker player take on the game of poker? PokerNews spoke to Hendry and discovered that another snooker legend introduced him to the game.

Turns out, Steve Davis took to the game early.

"He was always on his laptop at the venues," Hendry said. "He said that you could go on and play for free money at the beginning, which I did.”

Hendry’s natural aptitude for the game of snooker applied to poker too. Transferable skills are obvious and numerous. Time spent waiting for the other person to make their move, as well as needing to press home your advantage when you’re in good position are just a couple of examples. Hendry loved poker and took to it well, along with many of his peers.

"There were times when I was still playing poker at two or three in the morning [the night before a match]."

“A few of us were playing to all hours in the hotel room," he said. "It was great fun, but if you had a match the next morning it was dangerous. There were times when I was still playing poker at two or three in the morning. It didn’t affect me in the matches, but it probably wasn’t advisable.”

With the World Championships in Sheffield having a 10 a.m. session, a few players would be burning the candle at both ends. That love of online poker eventually found its way to live games organized between the players.

“Someone would bring chips along and we’d have a game or even the odd tournament," Hendry recalled. "The first time I played, I was way out of my depth. But I played a bit more in casinos in £10 rebuy tournaments. I loved the experience.”

A Trip to Vegas

Encouraged by his early experiences at the poker table, Hendry was contacted by gambling firm Betfred, which took him all the way to Las Vegas, and a seat into the World Series of Poker Main Event as a promotion.

Suddenly finding himself sponsored to travel to Sin City and sit down in the world’s biggest poker tournament, Hendry knew that it would be a big step up. He’d been on a holiday to Vegas years earlier, staying at The Bellagio.

“I went to play poker for a wee while in the evening," he said. "I came back at six in the morning because I lost track of time — it was so much fun.”

The bright lights, the history, the drama. Hendry was used to the limelight, so some of it was perfectly familiar. However, the final result wasn't as he wouldn’t get far. In fact, he wouldn’t make the third level.

About three hours in, someone flopped a set of deuces on Hendry's bullets. He wasn't able to find the fold button.

"It was inexperience," he said. "You play a bit longer and you can get away from your aces."

The next year, Hendry wanted to get right back on the horse, and he had the fortune to play a round of golf with a player known as "Crazy Horse," former Hendon Mobster and Season 1 EPT champion and runner-up, Ram Vaswani.

Over a round at Shadow Creek in Las Vegas, the two connected. Turned out, Vaswani liked a bit of snooker as well, so they had plenty to discuss, and Vaswani passed along some poker wisdom. His advice might seem elementary, but it helped Hendry raise the bar on his game.

"He told me that playing two connecting cards was a good idea," Hendry said. "I lasted a bit longer that year — about eight or nine hours.”

Spurred on by his improvement, Hendry started playing a little more locally and online. He’d turn up to legendary poker room The Vic in London and play cash games and the occasional tournament. He even finished fifth in the Celebrity Poker Club event.

The Scottish snooker pioneer preferred the flexibility of cash games to the long grind of tournament poker. He continued to play online but realized he was consistently losing money. After about "seven or eight years" he gave up the grind, sick of losing money.

Hendry felt like the game had been easy to start but hard to conquer in that tricky period where you know the way round a game and start developing patterns of play - patterns that can be countered a little more easily.

It was the complete opposite of his natural aptitude to snooker. Hendry was a child prodigy, a raw talent who was harvested in the aftermath of a birthday back in January 1982. At 13, he was given a small snooker table.

"I’d watched snooker on TV but never played," he said. "Within a couple of weeks, I was making 50 breaks. It was obviously natural talent and as I got better and better, I started to grow an inner steel.

"By the time I played professionally, I had so much confidence in my own ability, even if I lost a frame, I just knew that I could get it back.”

"It was obviously natural talent and as I got better and better, I started to grow an inner steel."

In poker, the beginner phase had passed but Hendry didn't have the type of confidence he had in snooker that let him overcome a rough period. Then, two years ago, PokerStars approached the sporting superstar to play under their banner at the London Festival at the Hippodrome. Hendry loved the experience, impressing outsiders and poker professionals alike with his play.

PokerStars reps wanted to continue the relationship and Hendry signed on for a year and saddled up for PokerStars Festival Dublin.

How would Hendry fare in the Emerald Isle? You can find out what happened in Dublin and learn the skills that Stephen Hendry brought from the snooker felt to the poker felt in the second part of How a Snooker Player Plays Poker.

How an Actor Plays Poker with Michael Greco: Part One