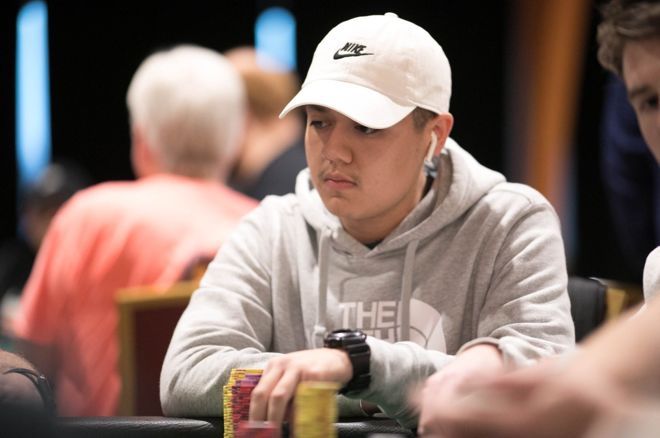 The RGPS Showbound $575 Main Event hosted by Downstream Casino Resort was a huge success with 372 entrants over three Day 1 Flights this weekend, a baker's dozen shy of the venue record. The players began their Day 1 flights with 20,000 in chips and battled it out for twelve 30-minute levels before the bags came out.

Flight B's end-of-day chip leader Eric Kelly (pictured above) flew under the radar for most of the flight and then came out on top in a clash against another big stack, bagging up 194,000 chips at the end of the day. Kurt Haiss (177,500) and James Traber (174,000) rounded out the top of Flight B's leaderboard.

Nic Petree made a run at the overall chip lead during the final Day 1 flight of the Main Event, but fell just short by bagging 283,000--good for the second spot on the Day 2 standings. Petree amassed the bulk of his stack in a huge multi-way pot. Petree held

in a four-way pot with a flop of

. Petree ultimately got it all in against an opponent holding

. The board bricked out with

, sending Petree to the top of the leaderboard.

The total prize pool for the event came to $186,000, well above its $100,000 guarantee. The top 45 spots will be paid with $42,781 going to first. The ten players who reach the final table will also be entered into a season-ending invite-only freeroll satellite at Hard Rock Tulsa for a pair of $5,000 Sit & Go seats to be on Poker After Dark, recorded in the PokerGO Studio in Las Vegas.

The restart the RGPS Showbound Main Event kicks off at 12 p.m. local time on Sunday with blinds of 2,000/3,000 and a big blind ante of 3,000. The PokerNews Live Reporting Team will be back on the floor to deliver the pulse of the tournament.

You can follow updates from the RGPS Downstream, and all Main Events during the Showbound season, right here on PokerNews. From early action to final table bustouts, will bring you all the highlights on the way to crowning a champion.