Poker Props: Jamie Kerstetter Going Vegan for a Year for $10,000 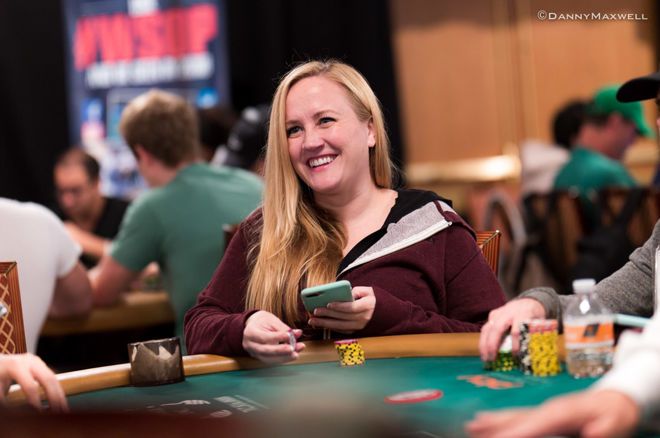 In the poker world, it doesn’t take much to get wheels moving on a prop bet. The latest involves an animal-loving carnivore putting her beliefs into action, going full vegan for a year for $10,000.

It all started with a tweet from David Tuchman, who seemed to be stirring up the prop bet waters. He himself responded that it would probably take $200,000 but soon after updated that the wife would not be in support of such a bet.

While most respondents put a number in the six-figure range, Jamie Kerstetter, the "Queen of Poker Twitter," replied with a reasonable $10,000 saying she was “interested in doing it anyway and it would cover the more expensive grocery bills.”

Perkins, who is known for booking props that push people to be better versions of themselves, took her up on it. And the terms were set.

I’ve gotten myself into a vegan prop bet #

As per usual, "bp" assures that good will come from the bet (a possible exception being the recent Jon Pardy Kelly Minkin tattoo – that one may just go in the entertainment value category). If Kerstetter can’t hold up her end, she’ll be tasked with 100 hours of community service to work off the $10K.

“Bill [Perkins] rules because he wants to encourage people to do the things they feel they should be doing anyway to have a positive impact on the world,” Kerstetter told PokerNews. “It's cool that he's willing to make this bet to hold me accountable and I'm sure he'll pick some really interesting places for me to volunteer 100 hours if I fail.”

Impetus for the Bet

After she announced the terms via Twitter, many reached out in support with encouragement or offering of resources or tips, including known vegans and health gurus Daniel Negreanu and Andrew Lichtenberger.

Many others expressed $10K wasn’t enough for the commitment she was taking on, but in her mind, it’s less about the money and more about following through with her belief system. Kerstetter is ready to stop compartmentalizing her eating habits and her love of animals.

"Basically I want to stop the cognitive dissonance involved with being an animal lover who cares about the environment...until I want ice cream enough.”

“It feels bad in the back of my mind to ignore what I know is the right thing to do and just keep allowing myself to have no willpower," she said. "Basically I want to stop the cognitive dissonance involved with being an animal lover who cares about the environment...until I want ice cream enough.”

Most people can relate to having beliefs but not following through by changing their actions.

“I would watch a shocking video and be disgusted enough to give up dairy for a week and then just kind of forget and go back to business as usual,” Kerstetter said.

Kerstetter sees the bet as an opportunity to make a major lifestyle change, one that hopefully doesn't disrupt those around her too much.

“The whole purpose of the bet from my side is to see if I can go vegan in a way that doesn't disrupt my whole life, become extremely time-consuming, bother my boyfriend, annoy my friends and have the negative effect that people love to complain about when laughing at vegans," she said. "But this seems to be impossible since just the mention of the bet has brought out a ton of trolls complaining about vegans.”

I feel like I've probably made the ‘mmm bacon’ comment at some point before really understanding what [vegans] are doing for everyone else."

In the infancy of the bet — it's currently day one — Kerstetter is quickly learning more about the depths of vegan-trolling and gaining new appreciation for backlash that many vegans deal with on a regular basis, including a good deal of unwarranted hate.

“A bunch of vegan friends and even more strangers have spent time sending me tips and lists of stuff I should buy to make the transition easier while random trolls said they'd eat double the meat to make up for it...so maybe vegans aren't the annoying ones despite what the cool memes would say," she said.

“I think it's a big issue that people who have been vegan for a long time just suck up and deal with every day. It doesn't really make sense because they're not hurting anyone and are actually trying to be nicer, more considerate people who care about animal suffering and the environment. I feel like I've probably made the ‘mmm bacon’ comment at some point before really understanding what they are doing for everyone else — I'm sure I'll appreciate them even more when I see how difficult this will be.”

As hard as it may be, Kerstetter has confidence she’ll get it done, putting her chances at following through with a year of vegan living at 95 percent.

“I can only imagine quitting if there's bad health effects, but I think with the right planning, this lifestyle will be healthier overall,” she said.

She knows it won’t come without its challenges, though.

“I think the biggest challenges will be shopping, food prepping and cooking for just one — I'm not imposing this on my friends unless I actually learn to cook something that doesn't suck (doubtful).”

“If I run into temptation, that five-minute dairy farm video that was making the rounds last week should be enough to get me back on track."

In the event things start going poorly in her mind, she has a plan for getting herself back in the right mindset.

“If I run into temptation, that five-minute dairy farm video that was making the rounds last week should be enough to get me back on track because it was really really sad and made me feel a lot of shame for not attempting this earlier.”

In terms of the attention her $10K vegan prop bet may be getting, she blames the poker world.

“People will super hate this article no matter how well you write it,” she said. “It's their fault it's a slow news day because nobody has stolen from each other in the last two days lol.”

As per the terms of the vegan prop bet, supporters and trolls alike get the added value of blog content at minimum twice per month from one of the funniest people on twitter, which is sure to be entertaining – and genuine.

“I'm going to be honest about it in blog posts,” Kerstetter said. “I won't be doing the ‘everything tastes exactly like bacon!’ so anyone interested can get a very recent meat-eater's opinion on what it's like.”

The original post also seems to be inspiring some other anti-animal cruelty endeavors, namely one by Max Silver who is looking to offset his own meat-eating by paying others to go vegan.

He amended the original offer to $1,000 for vegetarianism, encouraging other carnivores to extend the same $1,000 offer to additional people willing to forego meat consumption for a year. Keep an eye on Silver's twitter for progress on that project.

You can follow Kerstetter's twitter page for a link to the blog where updates on her year of veganism will be posted.