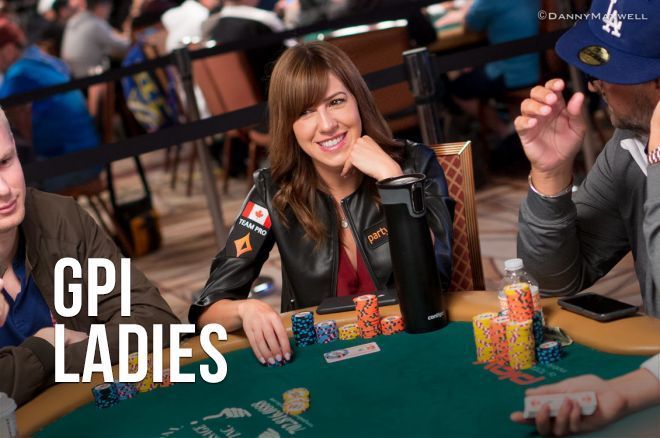 Similar to the overall GPI article that comes out on the first Thursday of every month, the Ladies Global Poker Index report highlights the rankings of the best female poker players in the world, with an update released on the third Thursday of each month. You can catch up with the first edition here.

Each week, the Global Poker Index releases a list of the top tournament poker players in the world using a formula that takes into account a player's results over six half-year periods. Here, we take a look at both the top 10 ladies 2019 Player of the Year standings and the ladies overall GPI rankings as of Feb. 20, 2019. For a look at the latest PokerNews overall GPI report, read this article, and to see the entire ladies GPI standings, visit the official GPI website.

It’s a new year and a new Player of the Year race has begun. The ladies standings for 2018 wrapped with Kristen Bicknell defending her Ladies POY title from 2017, in addition to clinching top honors for her home country of Canada. In doing so, she beat out the likes of fellow top pros Mike “GoLeafsGoEh” Leah, Sam Greenwood, Daniel Negreanu, Timothy Adams and Ari Engel, who finished in the five spots behind her, respectively.

Her 2019 is off to a hot start as well as Bicknell sits at the top of the ladies GPI and POY lists as well as for Canada, where she holds a narrow lead over Greenwood, compliments of her most recent fifth-place finish in the US Poker Open $25K no-limit hold’em event. She’s also currently ranked no. 12 in the overall GPI standings and no. 8 in overall 2019 POY, a list that she would undoubtedly like to find herself atop come end of 2019.

Just after telling PokerNews one of her main goals for 2019 was to notch a seven-figure score, Bicknell immediately got to work and closed in on that goal as she ran deep in the PokerStars $25K PSPC in the Bahamas in January – an event that drew a record 1,039 entries. A top-six finish would have meant seven figures locked up, but Bicknell would have to settle for 11th and $328,500 along with 410.92 GPI points to get the year started.

Other 2019 cashes thus far besides the aforementioned USPO final table earlier this week include finishing 82nd of 865 in the $10K PCA Main Event which she followed up with two cashes at the Aussie Millions. These included 19th place of 300 entries in a A$2,500 side event and a sixth-place finish in the A$100K Challenge out of 42 entries.

With the POY standings starting afresh for 2019, some new names have populated the top-10 list, joining the three familiar faces of Bicknell. New Zealand’s Sosia Jiang occupies the No. 2 spot not far behind Bicknell and has kept a similar poker schedule thus far.

Like Bicknell, Jiang kick-started her year with a strong showing at the PCA, where she finished 28th in the $25K PSPC and second of 98 in a $10K side event. She then headed to the Aussie Millions and added GPI points taking 11th place in the A$25K Challenge that drew 151 entries. Jiang will definitely be one to watch for 2019, especially if she keeps up her increased volume.

Moving up to the No. 3 spot is popular Florida pro Jessica Dawley, whose eighth-place finish from a field of 805 entries in the WSOP Circuit Coconut Creek Main Event Monday gained her 226.40 GPI points to go with $29,014 in prize money. In fourth is Li Yan of China, who cashed in three PCA events including 54th in the PSPC and 65th in the $10K PCA Main Event.

Climbing to fifth in the ladies POY race is high roller regular Lauren Roberts. After notching her first cash of the year in a $2,200 PCA side event (19th of 164 for $4,000), she has followed up with a US Poker Open $10K event victory and a ninth-place finish in a $25K USPO event just two days ago. Once that result is factored in, Roberts will move up into the top three.

The final five spots in the top ten are occupied by lesser known players making a splash. American circuit grinder Lakisha Slaughter is currently No. 6 with five cashes thus far in 2019. In No. 7, New Jersey's Judith Bielan has collected four points-earning finishes in 2019, the biggest coming from a fourth-place finish in the recent Parx Casino Big Stax $550 event that drew 1,540 entries.

Squeaking into the top ten are Australia's Sarah Bilney, who cashed four times at the 2019 Aussie Millions, Catherine Ivgi of the U.K. and Australia's Connie Graham. In less than two months time, Ivgi has strung together an impressive seven cashes in England and Czech Republic (King's Casino) in events ranging from the equivalent of $90 to $430 in buy-ins, including three final tables. Graham notched three cashes at the Aussie Millions to make the top ten.

With the overall GPI rankings taking into account the previous six months of results, there’s more continuity in this list from the final 2018 rankings. The top four remain the same players, with Bicknell leading by a strong margin. Maria Ho and Maria Lampropulos have swapped places, but the two are separated by just ten points. Loni Harwood maintains her place not far behind in no. 4.

Gao Wenling climbs two spots into no. 5, and Anna Antimony and Wendy Freedman slip one spot each to no. 6 and no. 7 respectively. New to the top ten is Jessica Dawley, now no. 8 on the overall ladies GPI standings, followed by Daria Feshchenko and Kitty Kuo.

You can follow the Ladies GPI races on the official GPI website or get updates via the GPI Twitter and Facebook page. Poker tournament results in this article were provided by The Hendon Mob.