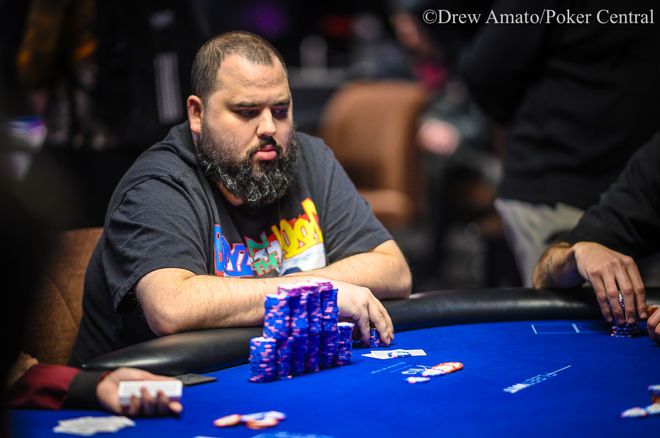 Fourteen levels are in the books after Day 1 of the US Poker Open $100,000 Main Event and after one day of play, nine remain of the 33-entry field. The number of entries matched that from last year despite the 100% increase in buy-in. As a result, the prizepool for the event grew to $3.3 million and created a first place prize of $1,320,000.

Leading the way after the first day of play was Chris Hunichen. While "Big Huni" hasn't had the most impressive series so far — just one cash for $59,000 — he's in a prime position to increase that number by at least five times, as a min-cash is worth $264,000.

Hunichen turned on the gas early in the tournament and he never let off throughout the day. In the end, he bagged 1,790,000 chips which was good enough to be the leader heading into Day 2. Others making the final nine include the likes of Martin Zamani, Ryan Riess,Justin Bonomo, and Jason Koon, who played his first event of the series.

Here's a look at how everyone stacks up in the final 9:

David Peters, Nick Schulman, and Sean Winter are all still in it as well and are in contention for the US Poker Open Championship title, which comes with a trophy and $100,000 to the player who accumulates the most High Roller of the Year Points over the course of the series.

Winter currently leads that race and would lock up the title with a fifth-place finish or better, while Schulman needs at least second and Peters would need to win to secure the prize. Stephen Chidwick currently is tied with Winter for the lead, but Winter holds the tiebreaker over Chidwick with most money won.

For every exciting success story though, there are plenty of stories of failure. Among those who entered but didn't make it through the day were the likes of Ali Imsirovic, Rainer Kempe, Dan Smith, Isaac Haxton, Chidwick, Bryn Kenney, and Alex Foxen. Each of those players is considered among poker's elites, but none were able to make it through the tough field.

Chidwick had one of the most memorable bust outs of the day, just missing out on the final table. In his final hand, he opened to 22,000 and was three-bet by Zamani. Chidwick then moved all in and Zamani snapped him off. Chidwick was holding ace-jack but it wasn't able to catch up to the aces of Zamani and he hit the rail in a brutal spot.

Here's how things look on the overall leaderboard heading into the final day of play:

*Winter holds the tiebreaker by virtue of having won more money over the course of the series.

Day 2 will play out on Saturday and the entirety of the final table will be live streamed on PokerGo starting at 2 p.m. local time.