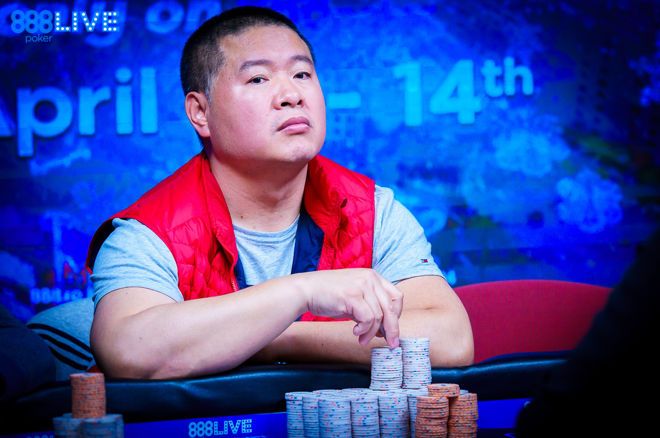 Day 2 of the 2019 888poker LIVE Bucharest €888 Main Event ended with 12 players out of 505 entries remaining and they are all guaranteed at least €5,070 for their efforts. However, all eyes in the five-star Intercontinental Bucharest are set on the 888poker LIVE trophy, a top prize of €75,000 and the added $12,600 WSOP Main Event package for the eventual champion, courtesy of WSOP sponsor 888poker.

After 14 levels of 40 minutes each, two commanding chip leaders have emerged in Zhiping Zeng (3,320,000) and Darius Neagoe (3,075,000). Zeng had several entries for the event, having played two bullets without success on Day 1a and firing another two bullets on Day 1b, before dominating the top of the leader board for the second half of Day 2. Niagoe scored a crucial double on the last two tables when his ace-king held up against the pocket jacks of Natalia Drytchak.

Natalia Drytchak, who defeated 888poker ambassador Sofia Lovgren in the Ladies Event at the last stop in London to earn her package for the trip to the Romanian capital, was eliminated in 14th place and Lovgren had to settle for 22nd place. Fellow 888poker ambassadors Chris Moorman and Martin Jacobson ran out of chips before the money and the top 63 spots were paid.

The day started with 160 returning players and the prize pool information was released, just 63 spots were paid. In the first two hours, the remaining field was nearly cut in half and among those to fall early on were Stefanita Fechete, €230 Opening Event champion Sorin Radulescu, defending champion Andrei Racolta, Narcis Gabriel Nedelcu, Dany Parlafes, and Maureen Bloechlinger.

Romania's first WSOP bracelet winner Alexandru Papazian, Jason Gray, Dan Murariu and Vlad Tatu also missed out on the money. In the 10th hand on the bubble, three players were at risk but only Ramlal Basdeo was eliminated. He was at risk preflop with pocket kings and flopped top set, but eventual end-of-day chip leader Zeng rivered a flush with ace-seven suited.

The following dinner break slowed down the upcoming pace of eliminations with Mihai Niste, Danut Chisu and Peter Jaksland all on the rail earlier than they had hoped for. Sache Loute made a move in a four-way pot with pocket fives and Ran Shahar called with pocket tens on a jack-high flop to jump above a million in chips. Zeng then took over the lead when his pocket aces dealt the final blow to Traian Mihai, who couldn't fold queens on a nine-high flop.

Lovgren reached the final three tables but came up short with her bid to win the title when losing a flip with ace-queen against the pocket sevens of Cristian Matei. It wouldn't take long to set up the final two tables after, as the average stack dropped with rising blinds. Day 1a chip leader Vasile Rablou lost most of his chips and the chip-and-a-chair story ended when he ran into aces to bow out in 15th place.

Drytchak had a roller coaster day and it came to an end in 14th place. Up and down all over the leader board, Drytchak was left short when paying off Zeng's rivered trips and her ace-eight suited came second-best to the ace-king of Darius Neagoe. Despite several players being very short, only Toni Judet was ousted after that, resulting in a dozen hopefuls for the final day.

The late registration for the High Roller remains open for the first two levels of Day 2 and all new entries will receive 50 big blinds at returning blinds of 500/1,000 with a 1,000 big blind ante. There are 22 players out of the 28 entries still in contention.

The final day of the Main Event will recommence at 1 p.m. local time with level 27 and blinds of 30,000/60,000 and a big blind ante of 60,000. As soon as the final table has been reached, the level duration will increase to 60 minutes and the event will play down to a champion. The live stream action will pick up after the first break of the €1,700 High Roller, which restarts Day 2 at 2 p.m. local time. PokerNews will be your one-stop-shop for all you need to know from the festival here in Bucharest.