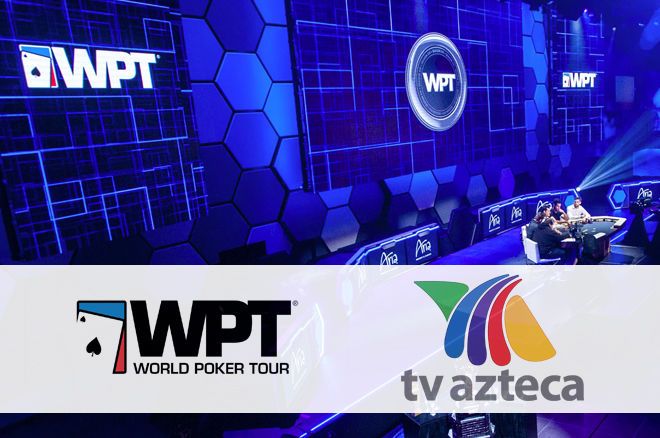 Under terms of the deal, TV Azteca’s multimedia network will promote the WPT, giving 17 seasons of televised content access to tens of millions of viewers. Both the WPT and TV Azteca will collaborate to produce original Spanish-language programs at the TV Azteca studios in Mexico City.

The deal will give the WPT massive publicity over the five-year contract as TV Azteca’s free-to-air stations reach more than 95 percent of the Mexican market.

Pliska: “This extraordinary deal with TV Azteca represents a historic advancement for the World Poker Tour into Latin America as WPT continues its global growth.”

In addition to the television distribution, TV Azteca has plans to develop a new social poker app designed exclusively for the Latin American market.

Poker players in Mexico should be excited by the fact WPT has agreed to run several of its major live poker tournaments in Mexico. WPT will put on up to two WPT Main Tour events, and eight WPTDeepStacks and WPT500 events each season as part of the newly formed LATAM Tour; the first of these events will happen within the first 12-months of the five-year partnership.

“This extraordinary deal with TV Azteca represents a historic advancement for the World Poker Tour into Latin America as WPT continues its global growth,” Adam Pliska, CEO of the World Poker Tour, said. “Aligning with Grupo Salinas and having their full commitment behind this project enables us to leverage its extensive network of television distribution outlets, land-based casinos, social media platforms, and merchandising venues, to engage with the Latin America poker and social games market.”

In another development, WPT sister company Allied Esports has joined forces with Grupo Salinas to deliver a live eSports experience, eSports-related content, and an online eSports platform to Mexican markets and throughout Latin America.

eSports is a massive industry with an article on Investopedia suggesting it could be worth up to $138 billion. More than 2.2 billion gamers are active around the world, and they will purchase $137.9 billion on games between them. Esports viewing figures and revenue is growing at double-digit rates and both WPT, and Group Salinas are hoping to grab a slice of this ever-growing pie.

Salinas: "By pairing with the WPT in this long-term relationship, we are taking a major step into social gaming and the global growth of poker"

“Grupo Salinas and TV Azteca graciously welcome the World Poker Tour and Allied Esports as part of our wealth of offerings across Latin America and Mexico,” TV Azteca CEO Benjamin Salinas, said. “We are fully committed to using our vast network to completely change the social gaming market in Mexico and to ensure that these games are available to all people in ways that are catered to them. By pairing with the WPT in this long-term relationship, we are taking a major step into social gaming and the global growth of poker as we fulfill our mission of being fully dedicated to best-in-class products, services, and entertainment to the market.”