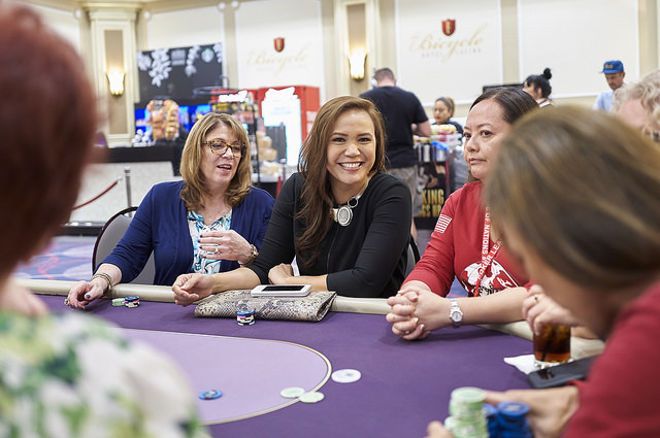 The fact that the World Poker Tour regularly has not one, but two representatives nominated for Industry Person of the Year in the annual poker awards speaks volumes to the tour's brand and reputation. One of the oldest tours in poker, the WPT was also the first to bring our beloved game into the homes of thousands through their televised tournament broadcasts.

While during the tour's early years the WPT was primarily U.S.-based, these days they have grown into their global designation, expanding into dozens of countries with events spread across six continents. One of the major sparks behind this impressive feat is none other than Angelica Hael, who now finds herself short-listed for the 2018 Industry Person of the Year honors at the GPI Global Poker Awards.

"These people are titans in this industry.... To be included among them is overwhelming."

"I was completely shocked," Hael says of her nomination. "Looking at the list — Savage, Ty, Rob, Cary — Seriously? These people are titans in this industry. To be included among them is overwhelming."

Indeed, she is among some heavy-hitters in the industry alongside the WSOP's Ty Stewart, Poker Central's Cary Katz, Rob Yong of Dusk Till Dawn, and of course, her own colleague Matt Savage. But Hael is by no means out of place on that list.

Hael was in Hawaii celebrating her 10th wedding anniversary when her phone started lighting up bright and early at 6 a.m. her time with messages delivering the GPA news. Excited and giddy, Hael enlisted her eight-year-old son to film a little message of thanks which she posted on Twitter.

One of the individuals she's up against in the category is someone with whom she's very familiar. He also happens to have won the award before — not once, but twice.

"I mean, look at that list. My odds of winning are minuscule, but I'm so stoked."

But Hael admits, she's not getting her hopes up about snagging the trophy.

"I mean, look at that list. My odds of winning are minuscule, but I'm so stoked. Whatever happens — it made my day," she says.

"If on the off chance I do win, I would really have to dedicate it to my WPT family," Hael adds. "You don't win these things because of you; you win because you're surrounded by people who are born to go above and beyond. I mean, it's in these people's DNA."

But what the humble VP of Global Tour Management won't say herself is that she fits right into the WPT team because greatness is also in her DNA.

Hael started out in the poker industry as a dealer at Crown Casino in her home country of Australia. She initially worked to earn money during her studies at The Royal Melbourne Institute of Technology, and then worked her way up from there. An opportunity came in 2005 when partypoker sponsored the Aussie Millions and Hael was tasked with serving as a liaison between the two groups to help with bookings, filming guidelines and other needs.

That role eventually led to a position in Gibraltar in the south of Spain where Hael worked as VIP Marketing and Player Development Manager for partypoker. After a couple of years there earning experience managing global events, she was ready to marry her then boyfriend and return to Melbourne to start a family.

"My boys are five and eight years old, but the WPT was my baby before they came along."

"I was fully ready to pop out kids and do nothing," Hael laughs. But opportunity soon came knocking.

She ran into Tom Hall, one of the founders of AsianLogic Limited, in Macau and he offered her a job. She accepted the post and then, a couple months after getting married, her husband took a job with Betclic Poker that carried them to London.

By 2010, Hael was ready to settle down and focus on raising a family, but WPT's CEO at the time, Steve Heller, had other ideas for her. He contacted her with a chance to head up a new department and "create something brand new" at the WPT. It was an opportunity that she couldn't pass up, but she soon enough was able to enjoy the best of both worlds, also getting to work on starting her family.

"My boys are five and eight years old, but the WPT was my baby before they came along," Hael recalls. "It's a different kind of love."

Now in her ninth year with WPT, Hael oversees the overall management of World Poker Tour and WPT-branded events, which currently total more than 60. When she joined the company in 2010, they were "international" with events in four countries and three continents, but Hael wasn't satisfied with that.

"I told Adam [Pliska], we call ourselves the 'World' Poker Tour, but we're in just three continents — this is asinine!"

He agreed, and she got the support she needed to help take the brand truly worldwide. Today, the only continent they aren't in is Antarctica, though Hael says she wouldn't put it past this group to take it there some day.

Amazingly enough, despite the reach of the brand with so many global events on the annual calendar, the Global Tour department remains quite small with just a core group of eight individuals working together. For Hael, it's a testament to the quality and strong makeup of that team.

In the year of her nomination for Industry Person of the Year, one of her biggest sources of accomplishment has come from the momentum she has helped build with the WPT's Women in Poker initiative.

Hael spearheaded a movement to increase female participation in their events, which led to countless internal discussions and then to the WPT Women in Poker Summit that Hael hosted at the Bike Casino in August 2018. Now seven months later, the WPT has made great strides in working with partners to offer events to attract more ladies to the game.

"It has to be multi-pronged approach, with focus on acquisition and retention," Hael explained. "We've had several events for ladies like Learn WPT and Play, Brunch and Learn — activities where ladies would feel comfortable, learning in a safe environment. Then we follow it up with cheap tournaments where they can test their skills, and ladies events."

Hael is aware that newcomers need smaller, less expensive events to ease them into the game, and increasing those offerings is important for the retention prong of the approach to get more women playing. But the WPT can't do this alone.

"We need the partners to believe in what we're trying to do and we have them in place," she explains. "They're really getting behind us."

Indeed, several of their partner venues have embraced the new initiative, welcoming the addition of events reserved for ladies. The Borgata hosted a Brunch and Learn, The Gardens partnered with the Breast Cancer Angels non-profit to host a charity tournament prefaced by an instructional session, and the Commerce hosted a learn and play.

"We need the partners to believe in what we're trying to do and we have them in place; they're really getting behind us."

They have more of these ladies learn and play events coming up as Seminole Hard Rock, Choctaw Casino, Golden Gates Casino and Aria have all gotten on board. Not only is WPT working with their partner venues, but they're also forming new partnerships with several female-oriented poker organizations including the Women's Poker Association (WPA), Ladies International Poker Series (LIPS), and Poker League of Nations (PLON).

"It's going to take time to significantly increase the turnout and we will definitely need support of players. We need sustainability, we need women to get behind it, and we're partnering with all the women's organizations. They're sincere in their efforts of wanting to increase our numbers, so there's a lot of collaboration."

With Hael at the helm and the WPT's support behind her, it's no wonder the initiative is already showing such strength less than a year since its inception.

Heading up the global division of one of the biggest poker tours in the world, spearheading a new initiative that requires building more partnerships and more planning and scheduling, all while being a wife and mother of two small children in a strange land with no immediate family around to help share caregiving tasks... it begs the question, how does Angelica Hael do it?

In her words, she got very lucky — in work and in love.

"Here's why it's worked," Hael explains. "First and foremost, the team that I have at WPT, the DNA of these people — they were born this way, to go above and beyond consistently, 365 days a year. They always give the same quality all the time."

"If on the off chance I do win, I would really have to dedicate it to my WPT family."

For being such a large and global brand, the WPT remains relatively small with around 25 core employees. For Hael, it is her family away from home.

"It's a close-knit group and it really is a family, with everything that comes with that, positives and negatives — not like a Hallmark family. We're open and transparent and we can argue, and because of that type of culture, tons of ideas come up, and many of them are crazy and may not work out."

It's this kind of culture that has allowed Hael to shoot for the moon and find support for her visions, no matter how crazy they may seem. The support she receives at home is equally important.

"I was blessed to find this man," Hael says of her husband. "He's in the industry so he understands the nuances and what's required, and he's not just a partner, but an active participant in raising our children — an active member of our household. He just gets it. These two groups are why I can do this."

The Global Poker Awards will be live streamed on PokerGO Friday, April 5 starting at 5 p.m. PT. Tune it to find out if Hael will be lifting her first Industry Person of the Year trophy.

Zinno: 'I Want to See More Women Play These Things'