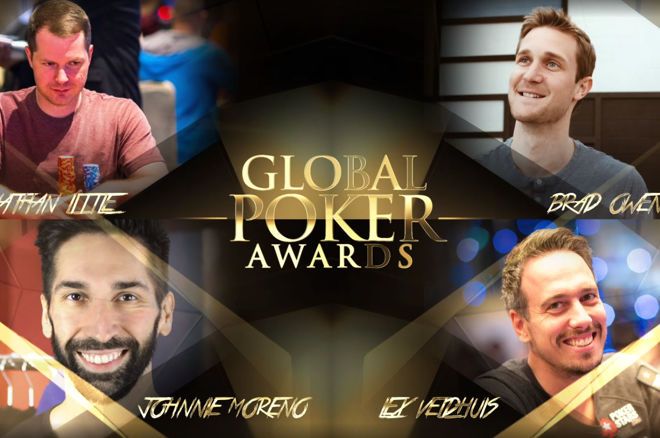 The tribe has spoken, and the final four nominees for Poker Personality of the Year are Jonathan Little, Brad Owen, Johnnie Moreno and Lex Veldhuis.

The People's Choice Award is the poker community's chance to influence the outcome of the GPI Global Poker Awards, which will be held Friday, April 5 in Las Vegas and streamed on PokerGO.

Nominations were collected up until last Thursday and these four got the most nods during the write-in phase. Those first-phase votes will carry over to the final four voting, which closes Wednesday, April 3 at 11 p.m. PT.

## Thank you all who took the effort to nominate their Poker Personality of the Year for the People's Choice Award.… https://t.co/7GUvYSZePC

Nominees for Poker Personality of the Year

As the Global Poker Index clarified, the People's Choice Award is not intended as merely a popularity contest, but should be a promoter of the game who works hard on and/or off the felt. More specifically, the award intended to be...

Presented to the poker personality judged to have been one of the game’s best ambassadors in 2018, making a positive impact in the poker world while engaging his or her audience, on any platform.

A quick look at the content put out by these individuals on their respective channels during 2018 affirms they're all worthy of honors, but alas, only one can win the People's Choice Award. Before you get to voting, here's a quick look at the nominees.

One of the most prolific poker strategy producers of the modern day, two-time WPT champ Jonathan Little is arguably one of the hardest workers in poker. From his many online coaching products, strategy books, and more recently - free live streamed strategy talk, Little is reinventing the standard for delivering consistent, personalized and engaging content to the masses.

Even as a seasoned pro closing in on $7 million in live tournament cashes, it's quite clear that the award would mean a lot to him. To get an idea of his excitement, you need only to watch the video he made to celebrate his nomination.

Congratulations are already in order for poker vlogger Brad Owen, who just announced on Twitter that he has surpassed the 100k-subscribers mark on YouTube - a formidable feat in such a relatively small community.

Two and a half years, lots of all nighters working on videos, and one cat later... I’m in the 100k sub club! Thanks… https://t.co/gAQEJdPChj

While many, including himself, were disappointed to not see the hardworking Vegas cash game player's name on the Poker Vlogger of the Year short list, Owen gets a bit of redemption with the Poker Personality nomination. After all, it's his fans and followers that make all the hard work worthwhile for him.

With 100k subs, Owen already has plenty of affirmation, but you can bet that a Global Poker Award would be some pretty sweet icing on the cake.

Another popular poker vlogger who documents the trials and tribulations of the mid-stakes cash grind life, Johnnie "JohnnieVibes" Moreno also earned the popular vote for the Poker Personality nomination. Like Owen, many thought Moreno should have been included in the Vlogger of the Year category, and his followers acted when they had the chance to cast their votes.

Moreno was recently featured right here at PokerNews following his 30-day #EmbraceTheGrind challenge and he puts up consistent vlog content that appeals to a wide audience.

In his 1.5 years of vlogging, Moreno has amassed over 26k followers, and he took to Twitter to express his appreciation to those supporters upon his People's Choice nomination.

This is insane to me. I just make videos about my life and the lessons I learn along the way. The fact that it’s a… https://t.co/unhDD8fM6X

He may have fewer followers than his fellow nominees, but as noted in a recent Twitter post, the Vibes Squad is a dedicated bunch.

I’m staying w/ a buddy in Vegas &amp; yesterday I was locked out so I went live on Instagram for a Q&amp;A while I waited f… https://t.co/GxN1ANO0kG

The only Twitch streamer included among the People's Choice Award nominees, Lex Veldhuis is now up for three different 2018 Global Poker Awards. The Dutch poker player and PokerStars Team Online Pro is also in the running for Streamer of the Year and Broadcaster of the Year after recently expanding his travel schedule to include some commentating at major live-streamed poker events.

With around 155k followers on Twitch, "RaSZi" is currently in the top five most-watched Twitch streams, as measured by total viewership hours over the last 30 days. And that's even after taking a little break this past week to host his inaugural Lex Live Spring Festival that just wrapped in Belgium.

A man of many hats, talents and followers, Veldhuis surely has as good a chance as any to win Poker Personality of the Year, or any of the other categories he's up for.

Submit Your Vote by April 3

It takes all of about 10 seconds to cast your vote, and you can do so here up until 11 p.m. Pacific Time Wednesday.

Only one vote per email address and IP-address is allowed, so hurry and get your vote in for the hard-working poker personality of your choice.