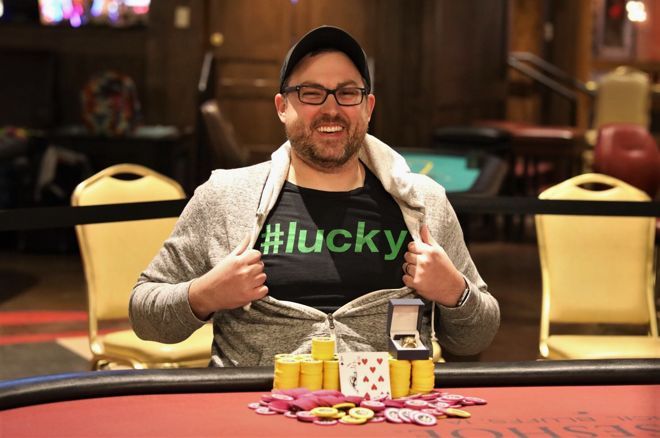 The fourth-to-last stop of the 2018/19 World Series of Poker Circuit season wrapped up Monday night at the Horseshoe Council Bluffs, which is situated just across the river from Omaha, Nebraska. It was there the $1,700 Main Event attracted 273 entries and offered up a $413,595 prize pool.

“Everybody played really well. Means a lot that I could win one with all those guys on the table.”

After three and a half hours, Burris prevailed over his friend to capture his second gold ring, a $99,267 top prize, and a seat into the 2019 Global Casino Championship. It was also the continuation of a heater for Burris, who back in February won the RunGood Poker Series (RGPS) Council Bluffs outright for $45,000.

“Really, really tough, Blair [Hinkle], Ari [Engel], Greg Jennings… I mean, it was just a really tough table,” said Burris. “Everybody played really well. Means a lot that I could win one with all those guys on the table.”

According to updates from the tournament, just six players returned for the final day of action. Early on, Ari Engel jammed his short stack holding eight-six suited and was called by Kevin Berthelsen, who had ace-ten suited in the big blind. The board ran out dry for Engel and he was ousted in sixth place for $18,769.

Not long after, the short-stacked Sarah Zeluf jammed the river holding trip tens with a king kicker only to get called by Burris, who had fives full of tens. Zeluf had to settle for fifth place and $24,630 in prize money.

With four players remaining, Greg Jennings got it in on the turn after flopping top two pair only to discover Berthelsen had turned a nine-high straight. The river failed to fill him up and Jennings hit the rail in fourth place for $32,839.

Berthlesen was the next to go after getting unlucky with ace-king against Hinkle’s king-ten suited all in preflop. Hinkle flopped a flush draw on the king-high flop and wound up turning two pair to send Berthelsen packing.

The heads-up match between Hinkle and Burris saw both players take turns with the chip lead, but eventually the latter began to pull away. In the final hand of the tournament, Hinkle got it in with jack-seven suited and failed to get there against the ace-eight of Burris. Hinkle, who had won the same tournament three times prior, had to settle for second place and $61,344 in prize money.

In other WSOPC Horseshoe Council Bluffs news, PokerNews' own Mo Nuwwarah is on his way to the 2019 Global Casino Championship. Nuwwarah topped a field of 563 entries to win Event #3: $400 NLH Multi-Flight before making two other final tables. Toss in a cash in the Main Event and he finished with 117.5 points in the race for Casino Champion.

Also winning rings at the stop were poker dealer Justin Heilman and grinder Mark Fink. The former came out on top of a 217-entry field to win Event #5: $400 NLH Double Stack for $17,900 and his first gold ring.

“Feels great. It’s a been a long time, long time fighting,” said Heilman, who deals at Grand Falls Casino outside Sioux Falls, South Dakota. “Two years ago, I quit my job and moved to New Orleans with maybe seven grand to my name and just started playing. About 10 months later, got close enough to the felt, so I became a poker dealer.”

“It’s been a while. It feels really good, in that sense, because it’s the longest between out of all of them,” said Fink. “Shout out to my boss Jeff for letting me take off time to keep playing. I’m blessed to be able to be here. I always like to give credit to Jesus who is my focus in life.”

Just three more stops remain in the current WSOP Circuit 2018/19 season starting with Harrah’s Cherokee in North Carolina from April 10-22. The tour then heads to Horseshoe Tunica April 25 thru May 6 followed by the season-ending stop at Harrah’s New Orleans from May 9-20.