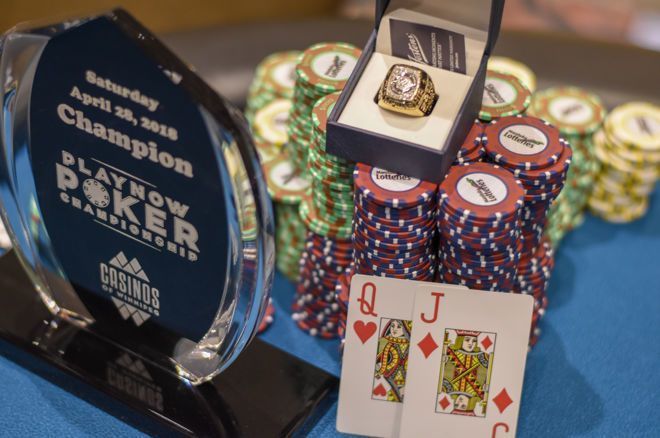 The PokerNews Live Reporting is headed to Winnipeg next week for the PlayNow Poker Championship at Club Regent Casino. The tournament series, which always runs the first week in September, has become a staple in the Canadian poker community.

The tournament series gets underway Wednesday, September 4 with a multi-table satellite. The buy-in of $180 gets 7,500 chips for 20-min levels, and 19% of players will win seats to the $1,100, and $600 events. Single table satellites also get started at 7 p.m. Wednesday for all the events and run through the week starting at 7 p.m.

Compete for a Ring

Thursday marks the first "ring" event with the $600 tournament, where the winner of the event not only collects the prize money, but also a trophy and a custom ring. Players start with 15,000 in chips and play 30-minute levels and at past events, the numbers have meant the final table of this coveted event has gone very late into the night. This year the decision was made to cut play after Level 22 and resume on Friday to play to a winner.

There will also be a package giveaway on Thursday, for a special VIP package to the September 27 Blue Bombers game versus Hamilton Tiger Cats that includes loge seats, sideline viewing during warm-up, and "inside the tunnel" view of the Bombers taking the field along with other goodies.

In addition to Day 2 of the $600 event, Friday plays host to one of the most fun events of the weekend, the $300 Bounty. With $50 bounties at stake, the chips fly around quickly, and with 20-minute blinds and just 10,000 chips to start, it's a fast-paced affair that sees lots of rebuys.

This tournament is a fan favorite for the action alone, but the pot is sweetened since it plays the same night as the Banjo Bowl party. The Blue Bomber Cheer Team and mascots will be on hand in the tournament area during the event.

The $1,100 Main Event gets underway on Saturday, and all entrants will receive complimentary wireless earbuds with registration. With 25,000 chips to start and 45 minute levels, there's lots of play and re-entry and late registration is open for six levels. The tournament will break after 15 levels on Saturday before the remaining players return Sunday to play down to a winner.

Throughout the week, the series will be employing a big blind ante beginning in Level 4 for all structures and will also observe a cap for players seated. Most tournaments have a cap of 260 players, with an alternate list if necessary. The first-day satellite is capped at 200 players at a time, and the final day $400 event will be capped at 160.

As usual with the PlayNow Championship, all tournaments have a custom trophy as a prize, and the $600 and $1,100 tournaments also award a ring to the winner. The winner of the $1,100 Main Event gets another special prize as well, poker's version of the "Green Jacket." PlayNow.com will provide a custom-fitted jacket only available to Main Event winners. Topping it all off is a player of the series competition that will award a full slate of tickets for the next series to the player who scores the most points across this series.

Alongside all the tournament action, the poker room at Club Regent Casino has cash games running throughout the week. PokerNews will be on the floor from the first hand to the last to bring you all the action.

Hold'em with Holloway, Vol. 118: Antonio Esfandiari on Why Most Things Don't Really Matter