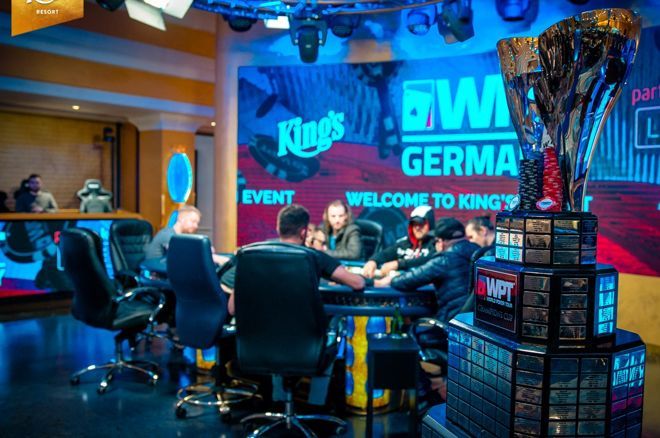 The stunning King's Resort, Rozvadov hosts the WPT Germany festival that got underway earlier this week and one of its first champions has been crowned with the Lithuanian player Ricardas Vymeris winning the €550 WPT Opener for €79,000 after defeating a field of 1,158.

The Opener came with a €500,000 guarantee, with the top twenty players also receiving entry into the €3,300 WPT Germany Main Event.

Vymeris came into the final fourth third in chips, with start-of-day chip leader Henry Kilbane still leading, but knocked out the first three players and was able to glide to heads-up, where he overcame the Russian Ashot Oganesian who had to settle for second place and €45,250.

Just 24 players returned for the final day of the WPT Germany Opener, with Henry Kilbane the chip leader. He was the only player with over three million chips, and had more than doubled that by the time the final table came about, as he led from Milan Simko, Joeri Moerman and Ricardas Vymeris who were the only other players over five million at the nine-handed final table.

The remaining nine players were all guaranteed €3,300 WPT Germany Main Event seats, and it wasn't long before short-stacked Damian Siewert was eliminated by Vymeris. However, it took over an hour for the second elimination of the final table as Slobodan Lekic's ace-king was rivered by the ace-seven of Vymeris to bust in eighth place.

In fact, the Lithuanian was on a tear as he flopped trips to eliminate Ernst Huber next to soar ahead and sit with 17 million in chips. After Joeri Moerman doubled twice in quick succession, Milan Simko was left short and would bust next.

Five-handed was a short-stacked affair, with Dominik Nissen busting to Moerman, before the resurgent Dutchman sent start-of-day chip leader Kilbane to the rail in fourth.

The stacks had levelled out somewhat, but after running threes into the tens of Ashot Oganesian, Moerman was suddenly the shortest stack of all and his hopes of a second comeback at this final table were dashed as Oganesian rivered him to send him to the rail in third.

Heads-up it was Oganesian who held the chip lead with 22 million to Vymeris's 13 million, but Vymeris battled back to regain the chip lead. The money went in on a ten-six-three flop with Oganesian having flopped two pair with ten-three. However, Vymeris held pocket kings and the board paired on the turn counterfeiting Oganesian's two pair, and the river bricked to secure Vymeris the victory along with €79,000.

Want to find out more about King's Resort? Check out this PokerNews video all about the property including an exclusive interview with CEO and owner Leon Tsoukernik

JokerPro, Starburst, and More: Claim up to 50 Free Spins!

Slot Tips: the Best Way to Win at Slots