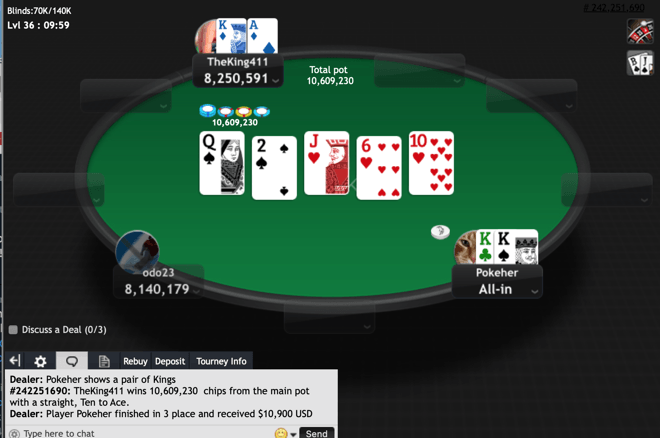 On Sunday, the partypoker US Network Online Series wrapped up its 21-event schedule in New Jersey. The series wrapped up the final four tournaments on its schedule, including the $400 buy-in, $100K GTD Main Event and $109 buy-in Event #1: $100K GTD NLH Phased.

The series, which combined fields from partypoker US, Borgata Poker and BetMGM Poker, catered to a combined 5,309 entrants and awarded $352,417 in prize money.

Here’s a look at winners from Sunday’s action.

At the final table, Vinny “brownmagic” Pahuja was the first to fall after losing a race with queen-jack to the pocket nines of “spinach_kale.” From there, “TheKing411” took over the show eliminating several opponents, including Angel “chromeking” Lopez in fifth place after the former got lucky with ten-four to beat the latter’s ace-queen suited.

With three players remaining, “TheKing411” got lucky again holding ace-king suited against the two black kings of “Pokeher.” A river ten gave “TheKing411” a winning Broadway straight and wound up being the last card of the tournament.

At the beginning of the series, Event #1: $100K GTD Phased kicked off and proceeded to hold eight starting flights throughout the week. All told, 726 entrants participated, with 183 of them moving on to Sunday’s Day 2.

Of those, only the top 54 got paid meaning some players had to leave emptyhanded including Jon “Jetsfan411” Borenstein, “JakeTheSnake99,” and bubble boy “GrindUrGearz,” just to name a few.

Early on at the final table, “AvidSmores” and “MoZZyNJ” played a big pot in which both players made a flush, but the former was best to give them a big chip lead. They’d ride that lead all the way to the title, eventually defeated Jake “FerociousPanda” Toole in heads-up play – the result of ace-five suited holding against king-five suited all in preflop – to claim the $18,700 first-place prize.

From May 19-24, you can put your skills to the test and grab some prize money during the partypoker US Network Online Mini-Series. Have some fun while putting your best poker face forward and play in our network’s online mini-series - featuring buy-ins as low as $0.25 up to $20.

This is the perfect series for players accustomed to the micro and lower stakes.

The series will culminate on Sunday, May 24 with a $10 buy-in $2,500 GTD NLH Main Event Big Stack, while the other big tournament on the schedule is the $20 buy-in Event #1: $10,000 GTD Phased, which will hold starting flights daily before playing it out on Day 2 that same Sunday.

Click here for a look at the full schedule.