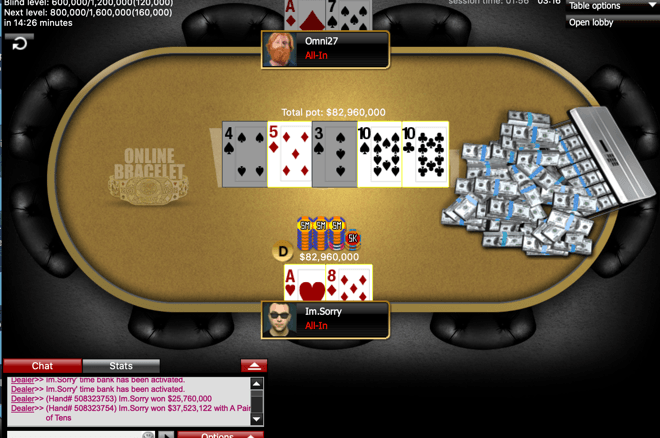 If his nickname rings a bell, it's no surprise. Last night, Torgersen finished runner-up in Event #9: $1,000 No-Limit Hold'em 6-Max. Torgersen came back for redemption and earned the victory after he navigated his way through one of the largest fields in this series.

A fairly new player to the series, his first official cash came from the WSOP.com Season Finale where he finished 30th just one month ago. Now, with two massive runs in a row and a WSOP bracelet richer, Torgersen has become one to watch.

Everyone experiences tilt in this game we all love... even "KidPoker"!

After Katie "katelin" Lindsay bubbled the tournament in 330th place, the eliminations came at a rapid pace.

Did Phil Ivey finally settle with Borgata? Find out here

Tom "4Logan" Dean started the final table as the short stack and he was the first to fall after his big slick was out-flopped by Chris "letsgetit888" Carey holding ace-jack.

Justin "Fatstax" Whitfield was the next player to fall when they jammed their stack into the middle after flopping an open-ended straight draw with ten-nine of diamonds and they were called by Torgersen who held king-ten of spades. Whitfield whiffed the turn and river ending their tournament in seventh place.

Brent "grebnrets" Roberts then bowed out in sixth place when his pocket eights failed to win a flip against Sam "texasmolly" Grizzle's ace-king.

Not long after, "letsgetit888" jammed his stack into the middle holding king-queen suited only to run into the ace-king of Torgersen. "letsgetit888" turned a queen only and it looked like they were going to double-up until Torgersen rivered broadway to send them home in fifth place.

Blair, who came to the final table as the chip leaders, found himself as the short-stack and he got his remaining chips in the middle after flopping an open-ended straight draw. Brandon "Omni27" Ienn called with trip sevens which held after Blair bricked the turn and river to end his night in fourth place.

Three-handed action saw the chips evenly dispersed until Sam "texasmolly" Grizzle three-bet jammed his remaining chips in the middle preflop after Torgersen had raised and was called.

Grizzle was racing holding queen-jack and took the lead after flopping a queen, but Torgersen spiked the river giving him a set of tens sending Grizzle out in third place.

Torgersen took a 2:1 chip lead into heads-up play and he chipped away at Ienn until the latter's remaining chips went into the middle holding ace-seven.

Unfortunately for Ienn, he was dominated as Torgersen held ace-eight and Ienn took his exit in second place for $106,508.

The next tournament on the schedule – Event #11: $500 No-Limit Hold'em Turbo Deepstack 6-Handed – will take place at 3 p.m. PDT on Saturday. The PokerNews Live Reporting Team will once again be reporting all the action, so be sure to tune in then to see who captures the eleventh bracelet of the 2020 WSOP!