Be Ready to Be Aggressive When Given the Green Light 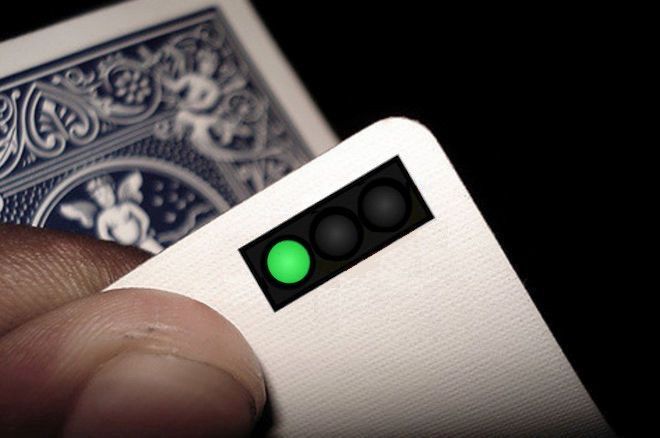 Aggression is called for, especially against your less sophisticated opponents, for two reasons chiefly: (1) to build a pot you expect to win in a showdown, or (2) to get your opponent to fold.

True, there are other reasons to be aggressive, such as to develop an image you might try to exploit later in the game, or to get opponents to be less aggressive against you in the future. But against your typical low- and medium-limit opponent, most of what you're doing is not sophisticated and can be limited to those two goals: building the pot and getting them to fold.

Green Lights Indicating Aggression to Get Your Opponent To Fold

When looking for spots to be aggressive in order to induce folds, first concentrate on actions and hand situations that indicate weakness. Some are obvious, though not unimportant.

Certain playing styles indicate weakness and should trigger aggressive play from you. If your opponent is extremely tight and weak, raising with a very tight range but then backing down and folding to action if he thinks he has been outdrawn, that in and of itself should be a green light indicating that aggression may well be called for. This is especially useful when you have position on this player.

Say you're the cutoff or the button and your weak-tight opponent raises preflop. Your "green light" should go off immediately. Think about how you might take the hand away from him. If others fold, unless you have an image as a very loose or wild player you should be inclined to sometimes call this raise, with the intention of betting aggressively on the turn or river to take this hand away from him.

You will see another green light if, after the flop, your weak-tight opponent checks. It is probably an indication that he had a drawing hand like ace-king that didn't connect, or a premium pair and a higher card flopped, scaring him into imagining that you might now be ahead. Bet here and expect to take down the pot. If he raises — having check-raised — give this weak-tight player credit for a rare act of deception; fold, and wait for another hand.

Green lights are sometimes apparent when playing tight-aggressive opponents with a broader range as well. Especially when in late position, these players mix in more bets with drawing hands and then continuation bet even when the flop doesn't hit. If your image is tight, recognize the green light when they raise on or near the button. This often indicates that they are lightly playing their position. Once again, be inclined sometimes to call these raises and c-bets with the intention of getting aggressive on the turn.

Many otherwise strong players tighten way up and play very little against the maniacs. This is an error. Green lights regularly are illuminated against extremely aggressive players as well. Here your intent is to play heads up against the maniac with your medium strength or stronger hands. You should be inclined against these types of players to play very aggressively with these hands to isolate these hyper-aggressive opponents from the other opponents, but be ready to put on the brakes if more conservative opponents enter the mix.

For example, if there's a player who has been raising just about every hand, when you hit a decent hand, see the green light and raise him with any pair or large cards or suited

. You'll be increasing your variance, to be sure, but against someone who is truly gambling it up, you'll have a decided edge.

Your own play may light up a green light as well. If your image in the mind of your opponent has become very tight due to a long string of folding preflop (even if you know yourself to typically play many hands), you should recognize the green light and begin to play much more aggressively. Against all but the most observant players with the best memories (or good record-keeping) your image will be based on your recent playing experience. Take advantage of it by taking an aggressive stab at a large pot.

These green lights are dependent both on your image and on your hand. They require a bit more patience and will happen less frequently than those you'll use to get your opponent to fold.

These green lights indicate that a large bet or shove is called for, even if more typical play would be to slow play or bet small. Consider the following scenario.

You've used aggression to win a few uncontested pots lately, perhaps against the same player whom you've been bullying by reraising or check-raising and getting him to release his hand, though he was initially the aggressor. Perhaps you did so with a strong hand, or perhaps you bluffed him. No matter. His apparent frustration with your bullying is your green light to be extremely aggressive when you have the goods.

Say you're in early position with

-suited. The opponent you've been bullying raises preflop in late position. Be inclined to call if your stacks are relatively deep. Check the flop no matter what hits, and let him initiate the betting.

If you've hit your hand with two pair or a flush, respond to his aggression with extreme aggression, even if your typical play would be to be to slow play it. Your recent history of knocking him out of the hand with your aggression is your green light to be extremely aggressive here. You may well trigger a call, just out of frustration and a desire not to be pushed around.

With all of these "green lights" you still need to adhere to the typical rules of caution. If you've targeted one player but others enter the pot, be extremely wary.

Similarly, if in spite of the green light you've spied your opponent has responded to your aggression with more aggression, you should recognize the possible futility in your action and be willing to back down.

Use This Article to Collect 110 Free Spins

Casino Offer for the Weekend: 3 Bonuses in 1