Brushing Up On 2-7 Triple Draw: Five Tips for Success 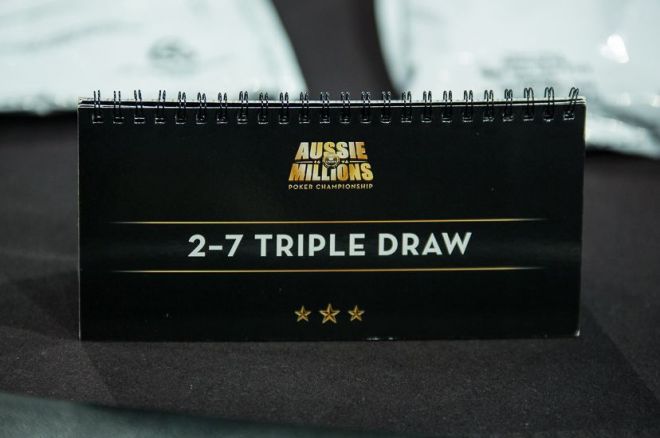 Coming up in about a week and a half, Event #34: $1,500 2-7 Triple Draw will take place at the 2016 World Series of Poker. The cards will be in the air on Monday, June 20 at 3 p.m. in Las Vegas, so that gives you a good chunk of time to do some last-minute cramming before taking your shot in one of the more popular mixed games.

If you're a beginning, we're here to help you get a hang of the basics. If you're a little bit more advanced, remember that it never hurts to give yourself a refresher course. That's why we've compiled a list of 2-7 triple draw advice for you.

1. Always Have a Deuce

Now, you don't always have to have a deuce in your hand. The more advanced you become with the game, the more you'll be able to open up your range of starting hands and get more creative. But for those getting involved as more novice players, always having a deuce in your hand is a good rule to adhere to.

To put it simply, you can't draw to the nuts in 2-7 triple draw without having a deuce in your hand. The card is in the name of the game, and it's for good reason. Last year, PokerNews spoke to Stephen Chidwick about 2-7 triple draw, and he gave us three tips. Having a deuce was his first piece of advice, and you can read more by clicking here.

First of all, all players, including yourself, have more opportunities to draw and make high-quality hands. Secondly, it's harder to bluff players in a limit betting structure, which means people don't do much of it.

All of that said, it's best to aim to make an eight or better, meaning a non-straight or non-flush hand with an eight as your highest card. This is something Ken Lo explained very well last June, and we'd recommend you give his article a read here.

There are times when two cards can be better to start with than three, even though you might think that doesn't make sense because you'd only have 40 percent of a complete hand versus 60 percent. Starting with a deuce and a seven is better than starting with a four, five, and six. Yes, you have more of the lowest cards in the deck to start, but they're connected and you'll make an unwanted straight a lot of the time. You'll also find that most of the time your opponents will have deuces in their hands, making it harder for you to pull one and not make a straight.

It's these straight-making hands that you'll want to avoid starting with in order to give yourself the best chance at drawing well in order to win at showdown. If you ask Matt Glantz, "The biggest mistake inexperienced players make is playing hands that could make a straight, four cards to a seven like a

. You'll learn from experience that those are just junk hands that you can't go with."

You can read more about what Glantz has to say about 2-7 triple draw advice by clicking here.

Like any poker game, position is paramount. Having knowledge of what your opponents are doing before you have to act can really tip the scales in your favor, and this is also extremely true in 2-7 triple draw.

When you're playing pots out of position, you're at a disadvantage to most players and your win percentage will suffer because of it. You'll be able to bluff less and will require more strong made hands to rake in pots. When you're in position, you can use the additional information you're privy to in order to outmaneuver your opponents in more creative ways, much like you would do in a standard game of no-limit hold'em.

"Position is as important in triple draw as it is in any game, because you get more information when you see how many cards your opponent is drawing in front of you," Glantz said in the same article. "Your opponents' actions will really change the decisions that you will make, and need to make."

Because you get three chances to draw in 2-7 triple draw, beginning players often think you can open up your starting-hand ranges under the false impression it's easy to improve with three chances to do so. If you come out guns blazing and playing a lot of hands, especially in tournaments where chips are so valuable, you'll soon realize that this isn't the way to go.

Be selective with the starting hands you play and pay attention to your position, just as you would in no-limit hold'em. A hand like

might be folded under the gun in a full-ring game, but on the button you're likely going to make some moves. The earlier you are in your 2-7 triple draw schooling, the tighter you'll want to be with the hands you play. We know this isn't always the most entertaining approach, but understand that the more experience you gain the more you'll be able to open up.

“One of the Purest Forms of Poker”: Jason Mercier on Improving Your Reads in 2-7 NL Draw