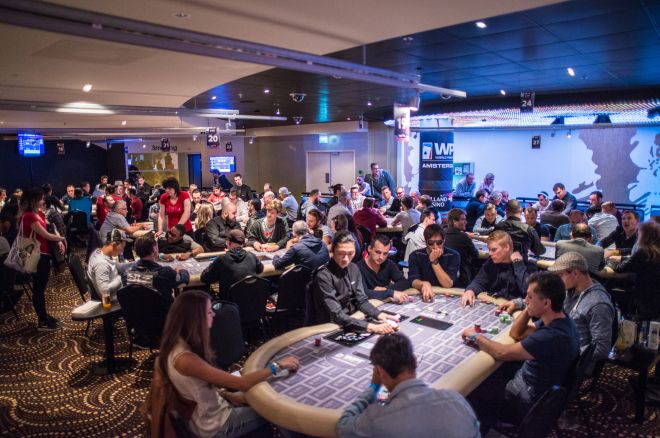 Beginning any new endeavor necessarily involves a learning curve. Since we’re all human, we’re all going to find ourselves making mistakes when trying something new. Poker is no different in this regard, and indeed even players who have been playing the game for years will often still make mistakes in particular hands or even in their overall approach to the game.

There are a few common mistakes new players tend to make as they get introduced to poker, especially those who have just begun to learn the game and discovered how much fun poker can be. Excited to play more and more, such players will often find themselves all tripping over the same obstacles on their journey toward becoming more experienced players.

Here are five common mistakes new poker players make, and in fact all five represent faults that even those who have played a long time will occasionally commit.

1. Playing Too Many Hands

Being able to evaluate starting hands, stack sizes, and position and learn when to play and when toss your cards away is a fundamental skill most players start to pick up early in their poker playing progress. Eventually players develop their own personal styles which may tend toward “loose” play (entering more hands than most) or cause them to remain over on the “tight” side of the spectrum (entering fewer hands). But the majority of winning players have learned the value of folding more hands than they play — sometimes folding a lot more.

While adopting an aggressive style is often desirable and can reap rewards at the table, being aggressive doesn't mean playing every hand. In truth, most winning players will fold more hands preflop than they play, in a lot of cases many, many more. Sometimes in multi-table tournaments a successful player who is considered “tight-aggressive” will voluntarily play only around 15% of hands, a statistic that might surprise those who are new to the game.

New players figure out quickly that strong starting hands are preferable to weak ones. It sometimes takes a little longer to realize it is also better to play fewer hands from early position (the blinds, under the gun) and more from late position (the cutoff, the button). There will be exceptions to these guidelines depending on various factors, including how your opponents are playing, but generally speaking playing too many hands is a good way to lose chips in a hurry, especially for new players.

2. Playing For Too Long

This mistake might be compared to the first one, as it often results from the same eagerness to play. In this case, players will find themselves staying at the tables well beyond the point they should. Poker is a mental game, but your physical well being often will directly affect how clearly you can think and make decisions. Playing for too long causes many players who began playing their “A-game” to drop down to a “B-game” or “C-game” as fatigue begins to affect their play.

Of course, sometimes players stick around for reasons other than to have more fun playing the game they love. Being “stuck” in a game refers to a player who is losing. For example, a player who is down $100 will be referred to as “being stuck $100” in the game. But the term also sometimes describes how losing in poker will cause a player to feel literally “stuck” in his or her seat and unable to leave until the money is won back. Such a situation often results in players committing the first mistake — playing too many hands — in an effort to recover losses and get back even in the game.

After learning fundamentals and getting used to playing longer sessions of poker, it is important for new players to discover how long they generally are able to play before their concentration wavers or the quality of their decision-making begins to be affected. For some, playing many short sessions rather than marathon ones suits their bottom line much better.

Poker players are notorious for being less than honest about their own abilities. Even good players sometimes will have trouble assessing themselves, especially when it comes to admitting that someone else at the table might be better than they are. New players generally realize that their skill level begins below that of their opponents, but after learning the game and especially after enjoying some success at it, it is easy to fool yourself into thinking you are a better player than is really the case.

Then comes that session when you find yourself up against a clearly better skilled opponent. After getting outplayed and losing a few hands, it can be difficult to admit to being outmatched. But it happens. Indeed, it will also happen that a new player — not yet necessarily accustomed to practicing good game selection — will sit down at a cash game and be surrounded by better players. What’s the best course of action when faced with such a situation?

Well, one sure way not to lose to better players is not to play with them. Finding a better game is usually an option, especially when playing online when there are often many tables and games from which to choose. Admitting you’re in over your head is easier said than done, of course, as is translating that idea into action and actually getting up from a table instead of trying to meet a new challenge. But being able to make such decisions can be crucial to becoming a more profitable player.

Because poker is a game that involves both skill and luck, there will be times when a player who has technically played a hand better than his or her opponent will still lose. Luck matters, and even if, say, you’ve craftily manipulated a player into an all-in situation in which your opponent only has 5% chance of winning to your 95% with one card to come, there’s still that possibility your opponent will hit that lucky card and steal a big pot away from you.

Because of the role luck can play in poker, it can be especially hard to avoid letting emotions affect your decision-making. Suffering an especially bad beat can knock even the most emotionally stable person off his or her balance going forward. Even winning a big pot can occasionally cause a shift in a player’s emotions that can have negative effects on subsequent hands, if that player isn’t able to manage the swings well enough to keep focused on individual decisions thereafter.

It is probably unreasonable to instruct players to play utterly without emotion at all, but you can be wary of letting emotion — such as caused by being on tilt — get in the way of playing sound poker. Emotion can lead to all of the mistakes listed above as well, causing someone to play too many hands, to stay at the table for too long, or want to take on better-skilled opponents.

5. Playing For Stakes That Are Too High

You hear experienced players often talk about the importance of bankroll management, referring to the need to choose games and stakes carefully and thus ensure they don’t subject themselves to the possibility of losing so much in a single tournament or cash game that they can no longer play. New players aren’t necessarily so worried about their bankrolls, but even for brand new players sitting down to play for the first time, it’s worth thinking over what significance the amount of money being risked has for them.

Most experts advise poker players of all levels not to play for stakes for which the amount being risked represents something more than they can afford to lose. Such is good advice when it comes to any sort of gambling — don’t bet with money you need for some other, more essential purpose. But since poker is a game that involves making decision after decision regarding the money you’ve chosen to put “in play,” it is not recommended to play with money you can’t lose since that will necessarily affect those decisions and thus make it very hard to play the game optimally.

Think about it — if you’re afraid to lose the chips you have in front of you, how easy is it going to be to bet as a bluff when you know you don’t have the best hand? You know it is very hard to win at poker if you never bluff at all, but that’s the position you might put yourself in when playing for stakes that are too high.

These are just some of the mistakes new players tend to make, although as noted even more seasoned players can be guilty of each of them from time to time. Most new players are conscious of their limitations when first starting to play poker, but remaining aware of those limitations going forward is perhaps the most crucial skill to develop so as to avoid continuing to make the mistakes listed here.

How to Manage a Bankroll Bump at Low Stakes