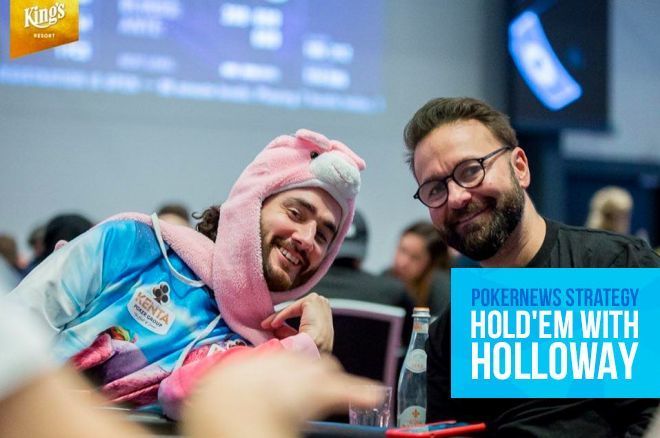 The World Series of Poker Europe is in the rearview mirror, and it ended in wild fashion as Daniel Negreanu at first won WSOP Player of the Year only to see it stripped away due to a results error. That, in turn, led to Robert Campbell winning the title.

For those who watched Negreanu's daily vlogs (myself included), it was a bittersweet ending to Kid Poker's journey. Speaking of those vlogs, it was there that Negreanu discussed an interesting hand he played against Israeli pro Eyal Bensimhon on Day 1b of the €10,350 Main Event.

It happened in Level 4 (300/600/600) and began with Bensimhon raising to 1,800 from early position and Negreanu calling from middle position. Yake Yu came along from the big blind and the trio saw the flop fall

Wu checked, Bensimhon continued for 4,500, and Negreanu called. Wu overcalled and the dealer burned and turned the

. All three players checked, then the

completed the board on the river.

Wu checked, Bensimhon bet 14,500, and Negreanu thought for a bit before moving all in for 61,000. Wu folded and Bensimhon considered it before calling with

for a straight. Negreanu showed

for a pair of queens, and he headed to the rail just shy of the dinner break.

Negreanu Breaks Down the Hand

In his Day 15 vlog, Negreanu broke down the hand and explained his thought process.

"What do I possibly have if I move in here? The nuts, always, right? He knows that. He knows that I'm always playing pretty solid in these spots and I'm never actually bluffing," Negreanu said.

Check out the hand breakdown that starts a little after the 12-minute mark in this video:

To get both sides of the story, I reached out to Bensimhon to get his take on the hand. Here are the questions I asked and what he had to say.

What inspired you to open from early position with six-five suited?

During the hand, there were seven players at the table. When I feel comfortable at a table, especially when we are deep (150+ BB) and the players don't show aggression and three-bet me often, I will open much wider.

-suited it's pretty easy to play postflop and people don't expect you to play with such a hand, so you can make a lot of chips if you hit. Basically, I had a good and comfortable table, a big stack, and nobody seemed to three-bet me much.

Why did you opt to continuation bet this flop? What did you think when both players called?

"I would have to bluff the river big and I would prefer to avoid it at this stage against two players."

I had a backdoor straight and a backdoor flush. My best chance to win the hand was betting the flop. If only Daniel calls, my plan was to bet the turn if any card came like a three, a seven, or a club which would give me some equity, and bet the river again for either value or a bluff. On any other turn, the plan was to give up the hand and go to a check-fold.

Against Wu, if he decides to call out of position, my plan was to put some more pressure with a big bet on the turn. When both called, there was no other option for me than to check the turn unless I picked up the

Why did you check the turn after picking up an open-ended straight draw? Did you consider betting again?

The bet on the flop was pretty big. When both of them call it's more likely one of them has at least a queen with a good kicker, which would also call the turn. In this case, I would have to bluff the river big and I would prefer to avoid it at this stage against two players.

By checking, I think it's less likely Daniel will bet the turn, especially because Wu is also in the hand. Daniel['s range includes hands like] K-Qo, K-Js, Q-Ts, Q-9s, J-Ts, J-9s, T-9s, 9-9, 4-4. With all of these against two players, I would expect him to bet/call/raise only two pair and

or better. All the others he will probably just check. So after Wu checked, there is actually a high probability to see a free river.

What did you make of Negreanu's shove on the river? In his vlog he said he was representing the jack-ten straight? Did you think he might have that?

At the table I thought that the probability he had

-offsuit is very low as he would probably fold preflop. That leaves him with four combos of

One more important thing is that Daniel looked to me a bit frustrated at the table, as things weren't going as planned and he didn't build a big stack. He stated in his vlog that he will play high variance and take some negative-EV decisions during the series in order to build big stacks as he was competing for POY. Money is not a problem for him, so I thought it can also be a good spot for him to bluff.

I was amazed by his patience toward every single player who came to talk with him and take a selfie. During the time we played and the breaks, I counted more than 30. Everybody just wanted a small piece of him (including myself).

At one point during the table talk, we tried to estimate how many selfies people ask him in one year. I think we concluded it was something like 10,000, which is crazy. And for every one of them he gives the feeling like he is their new best friend. After playing with him for a few hours, I can say with no doubt, that he is the greatest ambassador for the game.

Party on with 50 Free Spins at PartyCasino

7 Casino: Register, Deposit, and Win up to 77 Free Spins