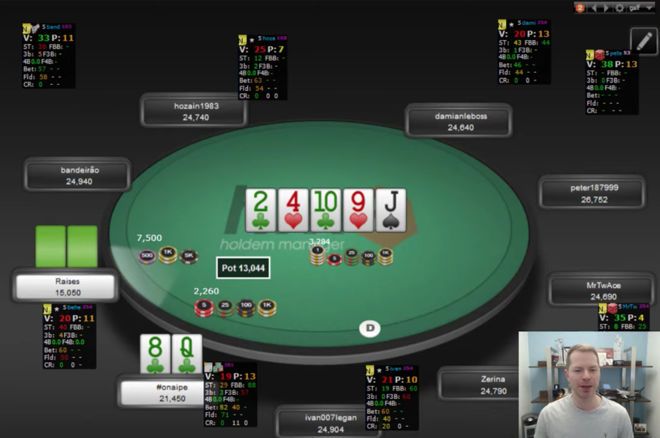 Poker pro and coach Jonathan Little has been producing a wide variety of strategy content for poker players for some time, including authoring multiple books and sharing videos and articles on his website and elsewhere, much of which is free to players of all levels seeking to improve their games.

Little started his popular "Weekly Poker Hand" series on YouTube more than five years ago, using the format to focus on particular concepts and common mistakes as illustrated in his hand analyses.

In the episode shown below, Little analyzes a hand one of his students played in the Sunday Million on PokerStars.

The hand comes from early in the tournament, and with the blinds 50/100 and the stacks all deep (~250 big blinds), our Hero limped in from the small blind with

then watched his opponent in the big blind raise to 450. Hero called, with Little agreeing with his doing so.

, Hero checked, and the big blind bet close to one-third pot. Little here debates the merits of calling versus check-raising with the flush draw, ultimately leaning towards raising as the better option. Hero just called, though, which Little says is also fine.

turn, however, is where Little diverges a bit from how Hero played the hand. With a gutshot draw added to his flush draw, Hero chose to lead with a half-pot bet. Little points out how the turn nine didn't necessarily connect that well with Hero's range, and thinks caution would've been a better approach. He also isn't sure about the size of the bet (half-pot).

The opponent called, bringing the pot up to 3,284, and the

fell on the river to give Hero a straight. Hero led for 2,260, and Little thinks he might have bet even more. But the big blind responded with a raise to 7,500, and with the second nuts Hero had a decision to make.

King-queen is possible for the big blind but so are many other hands, explains Little. How should Hero respond to the raise? Call? Reraise?

Find out what happens and listen to Little's analysis below, which includes discussion of several concepts, including...

The Best Casino Bonuses to Play Blackjack in 2019