Playing a Flush on a Paired Board 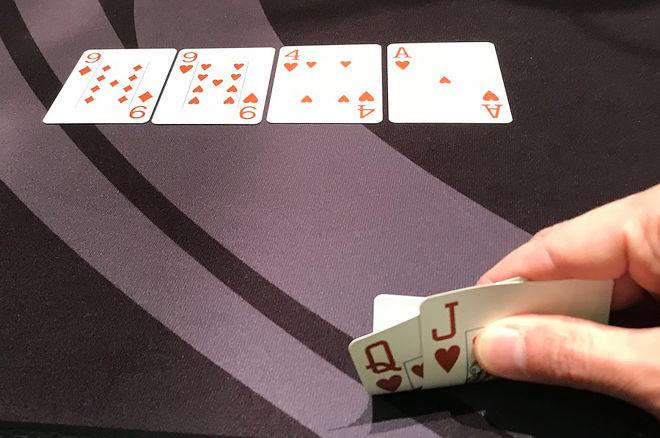 I have one last fun, multi-way no-limit hold'em tournament hand to review with you today before the holidays arrive, one involving a common situation in which I find myself navigating how to play a made flush on a paired board.

in the hijack seat where I opened for 550. The cutoff called my raise, then the button three-bet somewhat small to 1,400.

I called as did the cutoff, meaning there was a bit more than 4,700 in the middle when the flop came

I checked and both my opponents checked behind. As I discuss in the video below, the button's check seems to indicate he has either aces, kings, or queens (and is slow playing), or he doesn't have anything.

, completing my flush. I expect to have the best hand a lot here (save that possibility the button has aces or a few other rare situations).

At this point I was trying to figure out a way to get value, and one way to do that would be to try to get my opponents to bet with inferior hands (including by bluffing). See how I approached the situation below:

The trips coming on the river obviously made things even more tricky for me, forcing me to slow down. Would you make the call if the opponent bet the river?

Jonathan Little is a professional poker player and author with over $6,500,000 in live tournament earnings. He writes a weekly educational blog and hosts a podcast at JonathanLittlePoker.com. You can follow him on Twitter @JonathanLittle.

Hand Analysis: You Can Fold a Full House