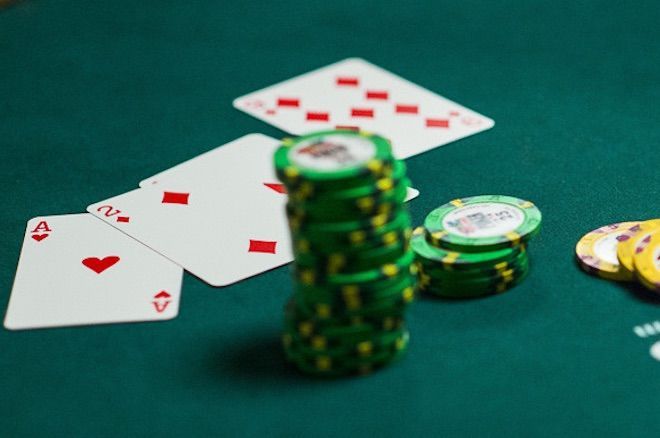 Since at least the publication of Doyle Brunson's Super/System in the late 1970s, serious players have recognized the importance of aggression in poker. "Power Poker" it was called. We all know that the best players use selective aggression to maximize their winnings while making other players fear them. Similarly, the dangers of being a "calling station" are legend.

With this in mind, players who are new to seven-card stud, or those generally unfamiliar with it because they don't play it regularly, might focus just on aggression. Such players might miss the importance of playing defensively, especially in tournaments, when your stack may not be replenished.

This article is geared to them to point out three situations that often arise in stud when caution is recommended.

You need to be especially cautious when an opponent who bet or called a bet on third street pairs his door card. If he bets or raises, by either the smaller or larger amount, tend to give him credit for trips. While it's surely true that he could have started with a wired pair, three to a straight or flush, or even just two big cards in the hole, it is far more likely that he bet or called on third street with a split pair, and has now improved substantially to trips.

It's also useful to note that pairing a door card is not a major concern if the bring-in bet was not completed on third street. In many games, players may call the bring in without even a pair and with a wide variety of holdings. So pairing their door card might mean they have nothing but a pair.

And, for players who were the bring-in, their bet was compulsory, meaning they started with a completely random hand. So pairing that holding should not trouble you in the same way.

2. Facing an Ace on Fourth Street

Many casual stud players know about the risks associated with a paired door card. But another danger sign, though less considered by casual players, is a player who initiated or called the bet with a low or medium card on third street who then gets an ace on fourth street and then bets or raises.

This is a concern because many players won't play a low or medium pair for a raise on third street unless they have an ace-kicker. In those case, when they get an ace on fourth street this means they have hit aces up. Unless you have trips, they almost surely have a strongly dominating hand.

Among regular stud players, this situation is familiar enough that getting an ace on fourth street almost always prompts a bet.

3. An Exposed Set on Fifth Street

You have to laugh a little at this. Yes, of course an opponent showing three of a kind is cause for concern. But what many non-stud players don't realize is that their caution should be so great that it is nearly always correct to fold to that set on fifth street even when you have a flush or straight or a lower set.

Unless the pot is enormous by fifth street because of multi-way action, it usually doesn't make sense to play against the set, even if you're in the lead. The reason is that the addition of the possibility that your opponent is already ahead of you, with a full house, or will hit his drawing ahead and make a hand that will be impossible for you to beat, makes this a losing proposition in the long run.

There are exceptions of course. If you have an open-ended straight-flush draw as well as your flush, if the pot is already enormous on fifth street, or if for some reason you know with certainty that your opponent hasn't made his full house, then it may make sense for you to play the hand for the last three streets. But under most circumstances, you will want to toss away the made flush or straight on fifth street when facing a bet from an exposed three of a kind.

Most have us have learned the importance of aggressive play in poker. We naturally extend that aggression to all forms of poker in which we compete. But that aggression needs to be tempered not just with selectivity but with caution against certain boards you are likely to face when playing stud.

From Paris With Love: Get 110 Free Spins and Play!

Six Stud Rules You May Not Know