Six Stud Rules You May Not Know 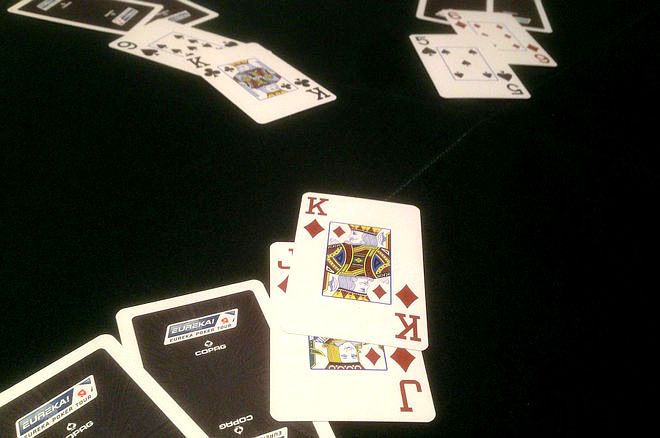 Stud games like seven-card stud, seven-card stud hi-lo, and razz are getting a lot of attention this summer thanks to their frequent appearance at the World Series of Poker.

In the interest of helping out players who may be new to stud games, I wanted to provide an explanation of a few rules and procedures that you might encounter in a stud game — things that don't come up in your regular hold'em game.

Not all stud rules are covered in this brief overview, of course, but they do cover some commonly encountered situations in stud games. For other situations when you don't understand the action or ruling, please call over the floor!

1. Low card on third street is the forced bet in stud and stud hi-lo.

Stud, unlike hold'em, has antes and a forced bet or "bring-in" rather than blinds to stimulate action. The antes come from each player, but the forced bet is required of the lowest card showing on third street, when only one card is exposed. This is true of both stud and stud hi-lo.

In razz, the forced bet comes from the player with the highest card showing. If there is a tie in the rank of this bring-in card, then suits determine who is first, with spade regarded as the highest suit, followed in order by hearts, diamonds, and clubs being the lowest.

2. The player required to make the bring-in bet has the option of betting the smaller forced bet amount or the standard bet for that round.

For example, in a $75/$150 stud game with a $25 forced bet, a player may opt to bet either the bring-in of $25 or the complete bet of $75. (If he tosses in a larger denomination chip and does not say "$75" or "complete" the bet counts as the smaller amount of $25.) If he opts for the smaller amount, a player may call the bring-in amount or raise by "completing" the bet to the amount of the first betting round, in this case to $75.

This act of completing does not count as a raise for purposes of meeting the maximum raise requirement in the game. For instance, if there is a three-raise maximum (such as at the WSOP), in the $75/$150 game, if a player brings it in for $25, and another player completes the bet to $75, there are still three possible raises left in the round.

3. Ties after third street begin with the player closest to the left of the dealer.

Sometimes (rarely), there will be a tie among the hands that are showing (that is, the "up cards"). When that is the case, the player with one of the tied hands who is closest to the dealer's left has the first betting option, regardless of the suit of the exposed cards.

4. In stud, if a pair is showing on fourth street (the second betting round), then players may bet or raise by the small or large bet amount.

Thus in our $75/$150 stud game, a player showing a pair on fourth street may begin the betting with either a $75 bet or a $150 bet. But once a player exercises his option to bet the larger amount, then all bets and raises thereafter in that round must be of the larger amount.

For example, if Bob pairs his

As soon as either Bob or Bill (or anyone) bets or raises by $150, then all bets and raises in that round thereafter must be by the larger amount. This is not the case in seven-card stud hi-lo or razz, when the fourth street bet is limited to the lower tier of betting even when there is an exposed pair.

5. Cards that are unintentionally exposed by the dealer are treated differently in a tournament than in a cash game.

In all stud games, if a card is unintentionally exposed by the dealer during the dealing of the first two down cards, if it is a cash game, then the exposed card is allowed to stand as an exposed card, and that player's third card, usually dealt up, is instead dealt down.

However, if it is a tournament and a down card is exposed in this way, it is a misdeal and the cards must be collected, and a new deal must be made.

6. Picking up the "up cards" when facing action will kill the hand.

When playing stud, in any form, do not pick up the "up cards." Look at your down cards without touching the up cards. Lifting the up cards while looking at your hole cards will completely kill your hand, and no dealer discretion is allowed.

Though these are the correct rules, you may occasionally run into differing opinions on any of them by inexperienced dealers or by misinformed players. If that happens, don't allow the most certain-sounding player to dominate. Insist on a ruling from the floor before you proceed.

A Fantastic Slots Bonus for You: 50 Exclusive Free Spins

The Witch Slot Machine: Are You Stronger Than the Curse?

The REALLY Free Spins You Can Claim This June