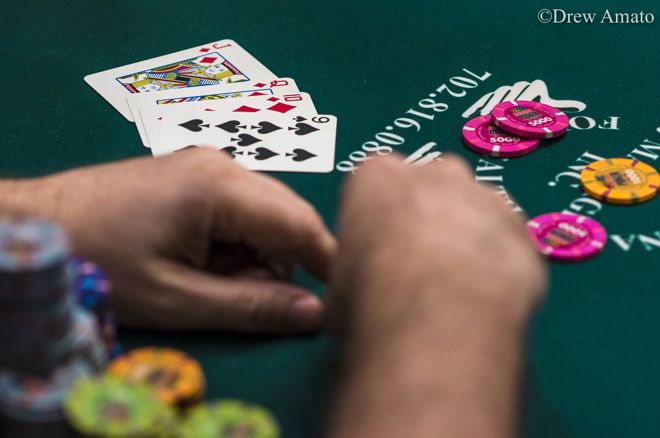 The 2018 World Series of Poker has entered its third week. As always, the WSOP provides one of the few opportunities for stud players to try their hand at tournament poker.

Stud tournaments are rarely spread these days, but as usual this year's WSOP schedule includes many events featuring stud games, with six different stud-only events (two each for stud, stud hi-lo, and razz) plus another eight mixed game events like H.O.R.S.E. and others also featuring stud games, including the $50,000 Poker Players Championship that kicks off today.

The skills that serve stud players in cash games will need to be adjusted, at least slightly, to best accommodate the different nature of tournaments and their structure. Consider, for example, that tournaments have a relatively larger ante-to-bet ratio than the typical mid-limit or low-limit stud game. (In fact, the tournament structure for stud games better resembles that used in typical high-limit stud games.) Also, players always have to keep in mind the "freezeout" nature of a tournament. Unlike a cash game, there is no continuing once you go bust. When you're out, you're out!

Considering the above, here are four major strategy changes that you should consider adopting if you enter a stud tournament.

1. Loosen up your starting standards

You will not be able to survive in these tournaments by just playing tight. While being a rock might work in your local $5/$10, $10/$20, or $20/$40 cash game, when it comes to playing stud in a major tournament, you will get eaten alive by the antes if you just wait for premium starting cards. You're going to have to be more speculative and broaden your range.

Depending on your position and the nature of your opponents of course, you may want to call in tournament stud with hands you might have discarded in that tightly structured cash game. In seven-card stud, for instance, you might be willing to call the bring-in, even if you know you may likely face a raise, with hands like (

When you do so, you will generally be looking to hit a very narrow range of cards on fourth street. With (

, for example, you would either hit a

to give you four to a straight, or you would fold (with the possible exception of betting a paired door card as a bluff).

2. Be more aggressive with "lighter" hands

In stud tournaments, you're going to need to fight more over the antes and bring-ins. That means more ante-stealing attempts, as well as more continuations of those bluffs on fourth and even fifth street sometimes.

For example, in seven-card stud when you hold three suited cards headed by a high card, especially an ace or a king, you'll generally want to raise and reraise a higher percentage of the time (rather than just call) than you would in a low- or mid-stakes cash game, representing the premium pair. This is especially true when, due to the specific situation you are in, you gauge your opponents to be more likely to release their hands and award you the pot.

While there is always the risk that your semi-bluff bet or raise will fail, you must be willing to take that risk when the antes and bring-in are such a large target. You should think similarly when dealt three big cards if you have the highest door card.

In stud tournaments, you just can't afford to wait for those premium pairs. You must be aggressive with a broader range of hands.

Unlike in cash games, when your opponents (and you) always have the ability to buy in for more chips, in a tournament starting stacks may not be replenished. Accordingly, when your opponent is short-stacked, his likely reaction to your bet must be considered based on that stack size.

For example, if he's especially short, he might have already made an assessment that he is willing to make his last stand on a hand he initially enters. Don't expect him to fold to your aggressive betting even if he hasn't seemingly improved. Similarly, his diminished stack may make him play much tighter than normal as he attempts to hold out for a truly premium hand before he enters a pot and risks his tournament life. You can expand your range of bluffing hands when he is in that situation, one that doesn't really come up in a cash game.

You must also consider your own ability to survive a hand for the full five rounds of betting, once you commit to playing a drawing hand. While you might typically elect to draw to a three-flush in a cash game, in a tournament, if you have a short stack especially, you might be better advised to throw the relative long shot draw away, even if you decide the pot odds warrant a call. You must add to your decision the possibility that your unsuccessful draw will eliminate or irreparably cripple your stack.

4. Consider where you are (and others are) relative to the next pay bump

Tournaments pay incrementally higher amounts as you near the final winner. You not only advance by winning pots, you advance by having opponents bust out.

If your tournament has 750 entrants, and there are 80 left with the top 79 getting paid, you'd be foolish to put in your last chip without a truly dominating hand. Let someone else get knocked out first, assuring you of making the money.

Similarly, if you're very short on chips with 39 players left, with 50th to 39th place paying $6,233, and 38th to 28th place paying $8,001, you might be more cautious than usual in entering any pot, hoping that someone will soon get knocked out to push you into the next higher pay bracket.

You should also consider this factor in the thinking of your opponents. As the pay bubble nears or as the next pay jump approaches, some of your opponents are likely to tighten up a great deal, especially the short-stacked ones, for the same reasons you might do so in the same situation.

When your opponents tighten up to make it past the next pay jump, you have a great opportunity for stealing the pot from them with bluffs and semi-bluffs. (Of course, good players know all of this, making your assessment of their intentions all the more difficult.)

One last consideration on stud tournaments. I encourage all of you to enter them and reward those who organize these tournaments with huge fields. With big turnouts in the WSOP stud tournaments, perhaps smaller tournament series will decide it's worth bringing back stud as a tournament event — maybe even to a casino near you!