Suspect Cheating in a Poker Game? Here's What to Do About It 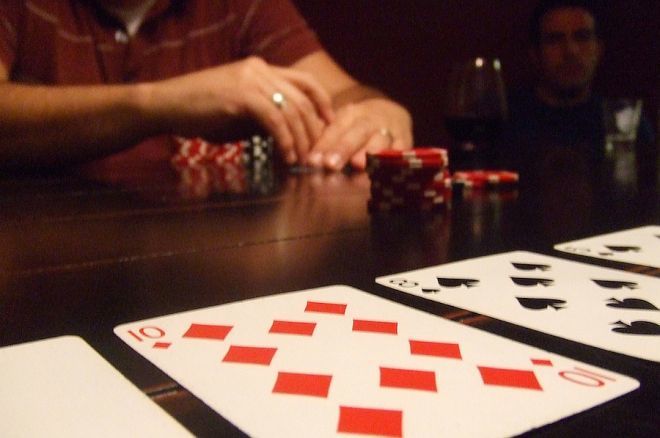 Last week I attended a concert by the Asheville Symphony Orchestra, the largest classical music organization in my new hometown. One of the pieces performed was "Suite from Billy the Kid," written by the then-unknown Aaron Copland in 1939. I've heard recordings of this piece many times, but it was only at this live performance that I realized it includes a musical depiction of a poker game.

The fourth movement I had previously known only by its main title, "Prairie Night." But the program for the concert included the subtitle that had previously escaped my attention: "Card Game at Night."

In the ballet — according to the All Music Guide to Classical Music — "during a card game, Billy is caught cheating by one of his friends, Pat Garrett. The two have an argument and Garrett rides off to join the side of law and order, and to eventually become a sheriff in pursuit of Billy." This leads to a shootout between the two sides, in which Billy is captured and several of his gang are killed.

I found nothing that definitively says that the card game in the ballet is poker, but it sure seems like the most likely possibility. Billy the Kid's real-life criminal exploits occurred in the late 1870s in Arizona and New Mexico, a time and place coincident with the explosion of poker's popularity. And at what other card game would it make dramatic sense for cheating to turn friends into bitter enemies?

We're fortunate to be living at a time in which lethal violence rarely if ever erupts in your better-managed card rooms. When guns are drawn in casinos, it's almost always for a robbery, not from anger. Even in home games, robbery and police raids appear to be more frequent as triggers of violence than disputes between players.

While cheating carries less potential for deadly outcome than it did on the 19th-century frontier, to accuse another player of cheating at poker is still rife with tension. Even in the safest, most civilized circumstances, accusing another player — rightly or wrongly — of cheating or any other breach of personal integrity in a poker game is far more explosive than the sickest bad beat.

What should you do if you are in a poker game and suspect cheating is occurring? There are courses of action to take, although my first and strongest advice is to avoid direct confrontation. It's simply too inflammatory to be advisable, and there are usually better responses available.

But what can you do? It depends on the setting.

There are only two forms of cheating you're likely to encounter in a brick-and-mortar casino. The first is taking chips off the table to protect a win — a.k.a. "going south" or "rat-holing."

I've encountered such incidents on a few occasions, and in my experience this is most often done by players who don't understand that it's against the rules. But even when done knowingly, it's a lesser form of cheating, in that it doesn't directly take money that doesn't belong to them. If you see it happening, point it out to the dealer, or to a floor person away from the table.

A variation on this theme is tournament players who sneak high-value tournament chips off the table, accumulate them at home over time, then sneak them back onto the table another day to pad a stack and increase their chances of winning. (I've also had an encounter with this form of cheating before.) You should obviously immediately alert tournament staff if you see a player either removing or adding chips to the table.

The more serious potential problem is collusion. This can take many forms. The classic is two or more friends playing at the same table, and secretly signaling each other regarding the strength of their hands. They can then trap other players holding a second-best hand into a betting/raising contest. Or in a tournament one can dump chips to the other by deliberately losing large pots, with any cash won to be split between them later.

It's usually difficult to know with certainty that this is happening. Your only defense is to be alert to the possibility, and watch for suspicious and repeated betting patterns. When you have enough reason to be concerned, alert the floor away from the table.

Home games can be rich incubators for cheating. That is not to say that all home games are suspect. Most are just fine, played by honest folks who would never cheat friends or visitors. But the nature of the setting is such that you can be targeted by all sorts of shenanigans that are difficult to spot, let alone prove. Marked cards, false shuffles, hands set up to be coolers, chip stealing, and collusion are all real possibilities.

Worse, you have virtually no recourse even when your suspicions are well grounded. This is the paradigmatic situation in which my admonition not to level direct accusations is most applicable. You have no way to know who might be in on the scheme, what their potential for violence is, or who could be carrying concealed weapons.

The best advice is to keep your suspicions to yourself, take the loss, leave cordially — and never go back. Take your lumps and put the incident behind you. If you're right that there's cheating going on, it's foolhardy to return thinking that you can catch them, beat the game, get recompense or revenge, or whatever other heroics you might imagine.

Even if you're wrong, and everything was above-board, you'll never be able to play your best in that game in the future, because your attention will be diverted to watching for dirty players and shady moves. Just let it go.

Fortunately, online poker doesn't carry much potential for personal injury if you accuse another player of cheating. Nobody's likely to know who you are, or, even if they do, travel to your home in order to punch you in the face for your defamation.

Unfortunately, detecting cheating is even harder online than in person. The biggest cheating scandals have been exposed only by sophisticated statistical analysis of large numbers of tracked hands.

The major, regulated online poker sites deploy advanced combinations of computer algorithms and human analysts who will discover collusive patterns much more readily than you can on your own. Sites like PokerStars, 888poker, and partypoker take extensive measures to ensure games are secure and fair. Meanwhile unregulated sites can be less careful about monitoring, and should therefore be avoided.

If you have reason to suspect collusion between players while participating in an online cash game or tournament, your only recourse, obviously, is to alert the site of what you see, and hope they will do a rigorous investigation.

Even here, though, I think it's better not to make your suspicions known to the players involved before reporting them. If they're guilty, it will be easier for the site to catch them if the players are unaware they're being investigated, and thus continue their cheating ways.

Mike Caro has famously said, "Poker cheaters should be boiled and eaten. If you think I'm not serious, you boil; I'll eat."

Sadly, you're not likely to have Caro around to help you dole out a fitting punishment to poker cheaters. Confronting them on your own is asking for trouble — far more than it's worth. Take your observations to the proper authorities when you can, and when you can't, just walk away.

Casino Poker for Beginners: Playing With a Friend? There’s One Rule You Must Know